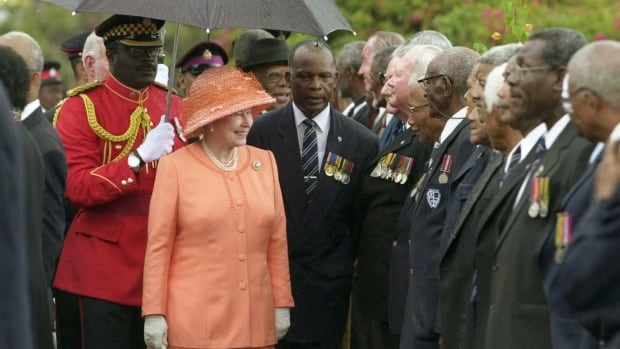 Nehemiah Bailey was a teenage army cadet in early 1950s Jamaica when his troop was called upon to welcome the recently crowned Queen Elizabeth — just a handful of years older than him — for her first visit to his home country.

He’d grown up watching her “on television and listened to her on radio and news media throughout her life — as princess and as Queen of England,” the 90-year-old recalled in Toronto on Friday.

Bailey, a past president of Ontario’s Jamaican Canadian Association, said he wasn’t surprised to hear of the monarch’s passing this week.

For Jillian Sunderland, the queen’s passing has stirred up complex feelings.

“It’s very sad that she died,” said the Toronto Ph.D. student, who is a dual citizen of Canada and Barbados.

“But as a figurehead — what she represents as an institution — a lot of people from formerly colonized countries and … lived under very kind of hard conditions because of that legacy, they have a different relationship to the monarchy and the Queen.”

Canadians with Caribbean ancestry have a range of complex feelings about the Queen herself and the legacy of British colonial rule.

As the world reflects on the legacy of the long-reigning Elizabeth, there have been a wide range of reactions to her passing, including among the Caribbean diaspora, where discussion about cutting ties with the monarchy have been more frequent of late.

While some are mourning the Queen and sharing warm memories, others are emphasizing the ongoing effects of the colonial rule she represented.

Admiration for Queen herself

Sunderland noted her own conflicted feelings. She grew up in Canada with a positive image of the Royal Family in childhood. She remembers, for instance, her mother’s upset upon the death of Princess Diana.

Yet as she began learning more about her Bajan heritage once she got older, that rosy portrait became complicated.

Sunderland says she differentiates between the Queen “as a mother, a grandmother … a beloved great-grandmother” and the monarch as a symbol of colonialism.

Donnovan Simon, a past president of Alberta’s Jamaican Canadian Association, acknowledges that people will undoubtedly be reacting to the Queen’s death in many different ways.

“For Queen Elizabeth in particular, there is a certain admiration,” he noted in Calgary, saying that the monarch’s death marks the end of an era.

At the same time, the ongoing legacy of colonialism and imperialism hasn’t been lost on Jamaicans, he added.

In March, during Prince William and Kate’s visit to Jamaica as part of a tour coinciding with the 70th anniversary of Elizabeth’s coronation, Prime Minister Andrew Holness unexpectedly announced that the Commonwealth nation intends to become a republic — as Barbados did in 2021. It came amid demonstrations calling for an apology and slavery reparations from Britain.

“I think we put those [discussions] aside today,” Simon said. “People have taken the time to pause deliberately to recognize [the Queen] and how they saw her. Tomorrow, they might get back to the questions of reparations and the impact of the the the monarchy overall.”

‘Dressing up’ versus true reconciliation

While Karen Richards doesn’t believe that people are “in the streets jumping and celebrating that the Queen has passed,” she also doesn’t think there is “the same feeling of sadness” among Canadians of African and Caribbean descent, given the complex relationship these communities have had with the monarchy.

Instead, the board chair of the Council of Canadians of African and Caribbean Heritage says she feels many are likely reflecting on what Elizabeth’s death may mean for Black communities and the Royal Family’s path toward reconciliation with them.

“If we want to be truly on a path of reconciliation, I think that we need to have the conversation: how do we level the playing fields in terms of power? Because the pomp and circumstance [of] the monarchy over generations and generations has been at the expense often of Black people,” said Richards, a Canadian of Ghanaian heritage in Edmonton.

While Richards says the Royal Family made some steps over the years to improve its relationships with Black Commonwealth nations, “Is it just dressing up in costume or has there been real and true reconciliatory measures?”

“I hope that those are the things that even the the Royal Family themselves are reflecting on — not necessarily in this time of grief, but they also need to look at themselves and think about what is going to happen with their relationship with Commonwealth countries moving forward.”

Upon hearing of Elizabeth’s death, history professor Isaac Saney’s thoughts went to how the news would be received in and will impact Caribbean nations.

“The Caribbean has sort of been at the focal point of challenging the monarchy, challenging what we would say are remnants of colonialism,” said the Dalhousie University historian, who is also chairing the committee developing Canada’s first university major in Black and African Diaspora studies.

Saney believes the Royal Family has not really acknowledged that “their lives of luxury that they live, this wealth they basically are able to have at their disposal, comes from what happened in the Caribbean through the transatlantic slave trade, through colonialism and through the domination of other countries of the global South.”

With people grappling with so many difficulties on both a personal and global scale — from challenges paying rent and buying food to navigating the COVID-19 pandemic, ecological catastrophes and international conflicts — he isn’t surprised that some aren’t expressing traditional sympathetic reactions to Elizabeth’s passing.

“People are really wrestling with these difficult things and I think it’s very hard for them to make a connect between them and this mythical family, this fantasy family,” he said from Halifax.

Saney, who grew up in Trinidad and Tobago, thinks the Queen’s death will be followed by a period of uncertainty for the monarchy and for the British political system.