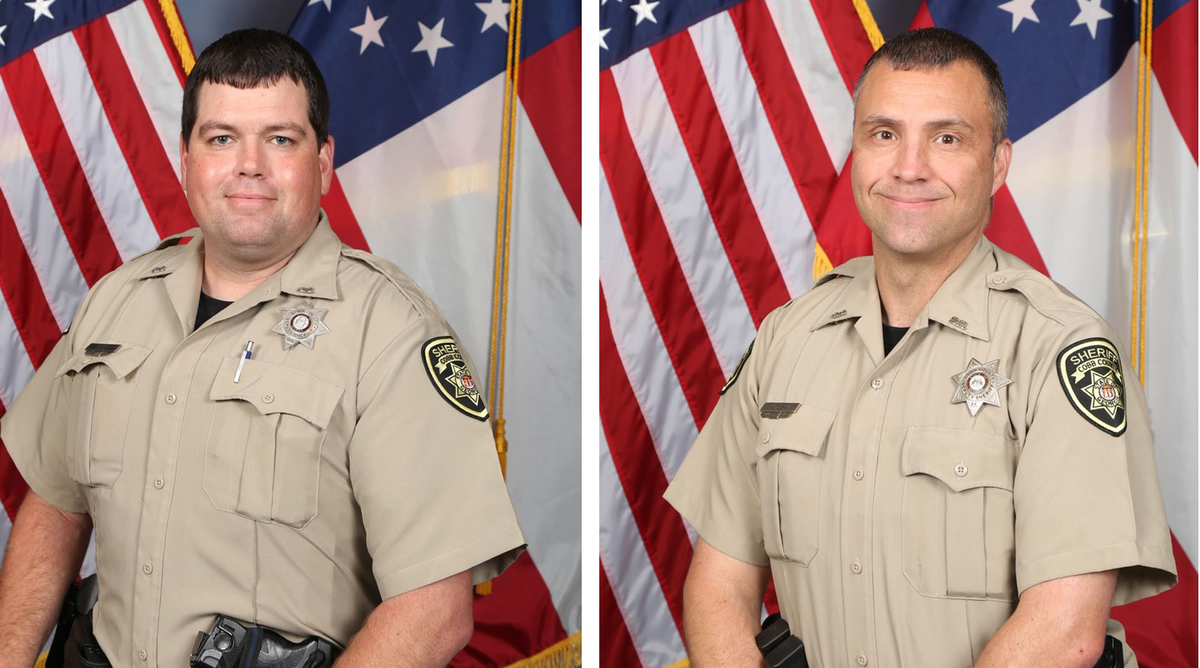 “It’s very simple. My two deputies were ambushed this evening and killed,” Mr Owens told reporters, adding the officers were the first deputies killed in the line of duty in the county in 30 years.

“It is a night of heartache for two families from the Cobb sheriff’s office, two wives who have lost their amazing husbands.

“These two deputies served Cobb County with dignity and honour.”

Please pray for the men and women of the Cobb County Sheriff’s Office. Pray for the wives, families, and loved ones of our heroes — Deputy Ervin and Deputy Koleski.
We are all hurting. pic.twitter.com/gmr1NBIkVv

On Friday, authorities gave more details about the fatal shooting and stand-off just west of Marietta in Cobb County around 7.45pm on Thursday.

The two deputies had been attempting to serve an arrest warrant on a suspect who had failed to appear, Cobb County Police Chief Stuart VanHoozer said.

Nobody answered when they knocked on the door and rang the bell of a property at Hampton Glen Court and Fenwick Drive.

As the officers returned to their patrol vehicle, another car pulled up.

Mr VanHoozer told the press conference that a suspect inside the home opened fire, fatally wounding the two deputies.

The suspects then barricaded themselves inside, as officers in tactical gear surrounded the property.

They surrendered around four hours later.

Mr VanHoozer declined to say what led to the standoff ending with the two men arrested. The home’s front door out of its frame and windows broken, but he said there was no more gunfire after the deputies were shot and no other officers were injured.

Mr Koleski was a US Army combat veteran who had served three tours in Iraq and Afghanistan, according to 11Alive.

Mr Ervin was a married father of two.

The Cobb Sheriff’s Foundation has set up a fundraiser to support the families.

Marty, the girls, & I were deeply saddened to learn of the killing of these two deputies. Men & women like them bravely serve our communities every day, & we owe them a great debt of gratitude.

Please join us in praying for their families & fellow law enforcement officers. https://t.co/32oPCPh0AW

Georgia Governor Brian Kemp paid tribute to the slain officers in a “Men and women like them bravely serve our communities every day, and we owe them a great debt of gratitude,” Mr Kemp wrote on Twitter.