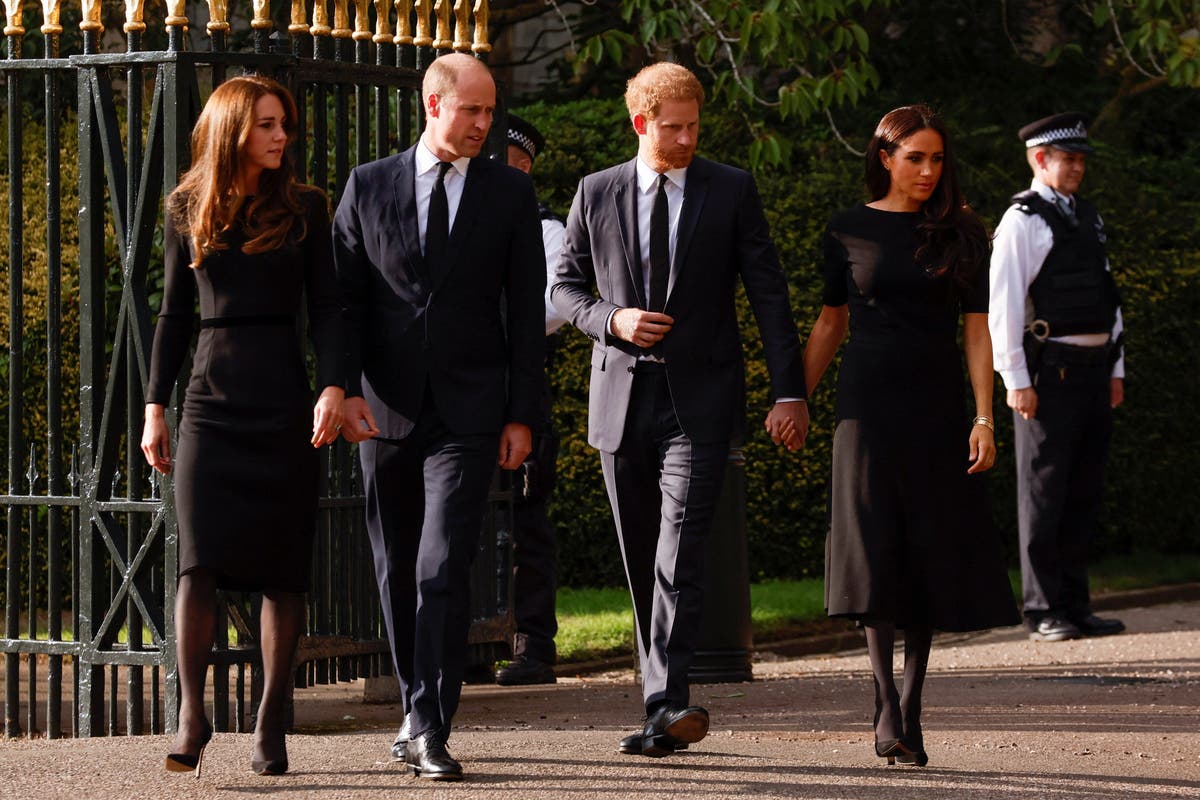 The Duke and Duchess of Sussex have reunited with the Prince and Princess of Wales to view floral tributes left in memory of the Queen at Windsor Castle.

Prince William, Princess Kate, Prince Harry and Meghan were dressed in all black as they walked along the gates, in what is their first public meeting since they were last seen at the National Service of Thanksgiving to mark the Queen’s jubilee in June.

The brothers have kept a distance from each other since the Sussexes’ quit as working royals and moved to California and their decision to speak out about their life inside the royal family.

The Duke and Duchess of Sussex held hands as they looked at the tributes, with Harry at one point affectionately putting his hand on Meghan’s back.

The couples spent over 40 minutes viewing the flowers and tributes and were seen pointing to and discussing them as members of the crowd waved to them.

They later shook hands and spoke to members of the public who had congregated at the Cambridge Gate, with a number of people snapping photos of the royals on their mobile phones.

The new Prince and Princess of Wales, who were given the titles by King Charles on Saturday, were given bunches of flowers by members of the crowd as one visitor waved a Welsh flag in the background.

At one moment, a small Paddington Bear was given to Prince William, which he passed on to an aide.

He was seen lightly touching Kate’s back as she crouched down to speak to a child at the front of the gates.

The royal couples walked separately from one another, with the Duke and Duchess of Cornwall and Cambridge speaking to people on one side of the road as Harry and Meghan greeted members of the crowd on the other side of the road.

Kate crouched down at one moment to speak to a child who had started to cry. The child stopped crying when Kate approached her.

Meghan was also seen shaking the hands of several children and well-wishers.

Later, Prince Harry moved and joined his brother on the same side of the road, chatting animatedly with the waiting crowds.

The number of bouquets given to them in tribute to the Queen was so great that all four had to repeatedly pass them back to waiting aides.

Kate and Megan spent much of their time talking to the children, who were among the nine-deep crowds lining the Long Walk.

The brothers were last together on Thursday night when both travelled to Balmoral upon hearing the news that the Queen was being cared for by doctors.

Prince Harry joined members of the royal family after the news of the Queen’s death had been announced to the world, while William arrived with princes Andrew and Edward and Sophie, Duchess of Wessex, earlier in the afternoon.

The Duke of Sussex was the first senior royal to leave Balmoral early on Friday morning.

Banita Ranow, 28, among the crowd on the Long Walk, said she heard Kate speak with children next to her about what her youngest son Louis had said about the Queen’s death.

She said Kate told the children: “Louis said at least Granny is with Great Grandpa now.”

Ms Ranow said Kate was “welling up” as she spoke to the children.

The well-wisher from west London also spoke of her surprise at seeing the two royal couples together, adding: “It was really nice.”

Her mother Baljinder Ranow, 64, said it was “fabulous”, adding: “It was so beautiful to see. I felt so emotional and I felt the Queen would have loved it. I just hope in the future they remain like that and that the brothers come together, and the families.”

Angela Fleming, who met the Duke of Sussex, said that the hour-and-a-half wait outside of Windsor Castle was worth it.

Mrs Fleming said: “It was unexpected, it was very unexpected.”

Her sons, Jacob and Jenson, were tiring in the heat, but she said that they would remember this moment for a long time.

She said: “It’s good for the boys. They were getting quite restless.

“But that was worth it.”

Her husband, Andrew Fleming, is in the Coldstream Guards and was working in London at the accession council earlier in the day.