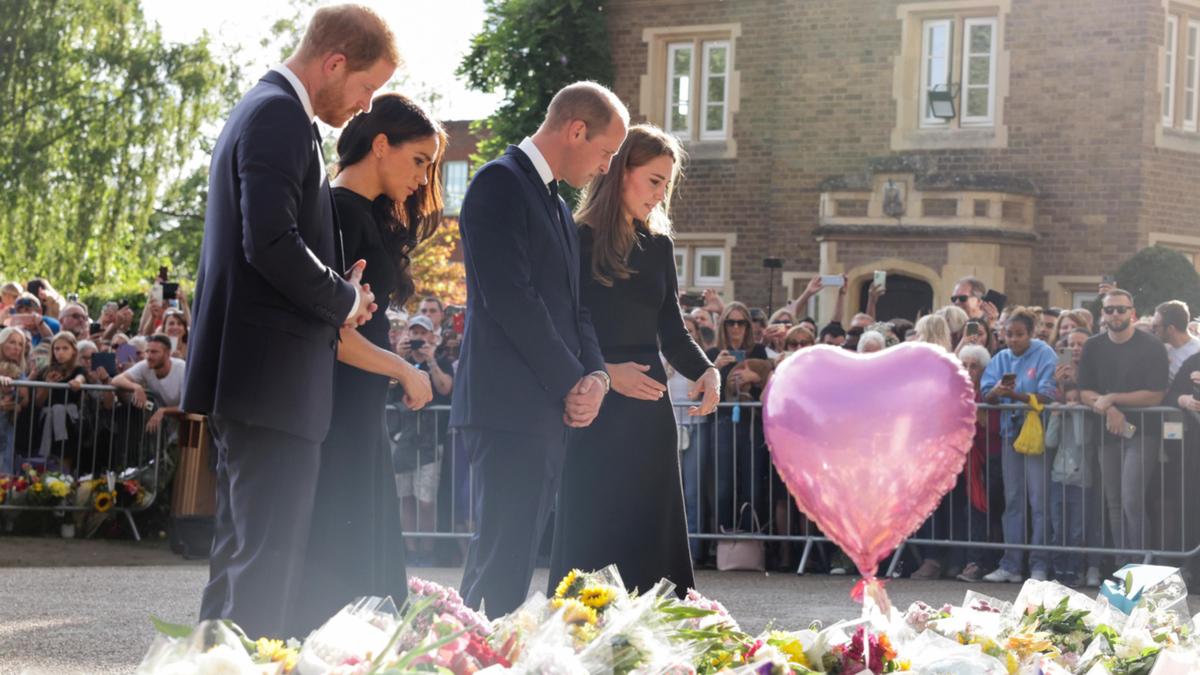 The King ordered his warring sons to set aside their ongoing feud ahead of the Queen’s funeral, leading the pair to reunite in public for the first time in more than a year, it has been revealed.

Royal sources say Prince William attempted to bury the hatchet by extending an “11th hour olive branch” to his younger brother Prince Harry by asking him to join him on a walkabout outside Windsor Castle following a phone call with his father Charles.

In a scene that clearly delighted royal fans, who had come in their hundreds to the gates of the Windsor estate mourn the Queen’s death, William and Harry walked out side-by-side with wives Kate and Meghan.

The two couples went on an 40-minute walkabout inspecting the sea of floral tributes laid outside the gates of the royal estate in honour of the much-loved monarch.

Experts predict the moment could provide a turning point in the frayed relationship between newly-titled Waleses and the Sussexes, who have been at odds following a series of damaging interviews by Harry and Meghan.

The Montecito-based Sussexes were consequently in the UK on a pseudo royal tour when the Queen’s health suddenly deteriorated on Thursday.

It is believed the Sussexes had not previously made any plans to meet with the Waleses, despite staying in Frogmore Cottage, just 640m from William and Kate’s Adelaide Cottage.

However both William and Harry raced to Balmoral on Thursday after it became clear the Queen’s health was faltering.

A Kensington Palace source said that the Prince of Wales had invited the Sussexes to join him and the Princess of Wales during this evening’s walkabout.

The Sussexes’ friend and preferred journalist Omid Scobie later claimed on Twitter that the invitation was made at the ‘”11th hour”.

However, hinting that William is prepared to extend Harry an olive branch and work towards melting the ice between them, he declared: “It is, without a doubt, a significant moment in the history of the relationship between the two brothers.”

The surprise appearance is thought to be the first time that the two couples have all been in public together since Commonwealth Day on March 9, 2020.

And it is the first time William and Harry have been seen together in public since they joined for the opening of the memorial in honour of their mother Princess Diana.

Harry and Meghan, who sensationally quit frontline duties two years ago to strike out on their own in California and then levied a series of bombshell allegations against The Firm, held hands as they looked at the tributes, with Harry at one point affectionately putting his hand on Meghan’s back.

They were seen pointing at different tributes and discussing them as members of the crowd waved at them.

At one moment, a small Paddington Bear toy was given to William, which he passed on to an aide. He was seen lightly touching Kate’s back at one poignant moment.

At one point Kate crouched down and began speaking to a child who had started to cry. The child stopped crying when Kate approached her.

One well-wisher said Kate “welled up” as she told children that her youngest son Louis — who stole the hearts of the nation during the Platinum Jubilee celebrations — consoled her by telling her: “At least Grannie is with great grandpa now.”

Another royal fan who spoke to Harry and Meghan said: “It’s lovely to see them both together.

“Maybe they can get back to a proper relationship. Lovely ripple went through the crowd as they approached.

“Hopefully the healing between Harry and his brother can start now. I’m just so excited to have seen them both together. It’s lovely.”

One mourner said: “We couldn’t believe it when the gates opened and we saw William and Harry walk down with Meghan and Kate. I’ll be honest there was a little bit of a groan when Harry and Meghan came down our side.

“But I passed him a bunch of flowers and he was happy to take them.

“I’m pleased that they came out together and as a family I’m delighted that they all took the time to come and say hello to the crowds.

“Sad things like funerals bring families together so I hope that when they get back to California they think long and hard about everything that’s happened.’

Just moments earlier, the Prince of Wales paid an emotional tribute to his late “Grannie”, describing the beloved monarch as an “extraordinary leader, whose commitment to the country, the Realms and the Commonwealth was absolute” and admitting it would be “some time” before her loss “will truly feel real”.

At Windsor, a member of the crowd was seen telling the Prince of Wales that they “loved him” during the visit.

One person was seen saying to William, “I love you William”, while others called out his name.

William appeared to be in good spirits while he met well-wishers, at some points laughing and joking with members of the crowd. In other moments he was seen being more sombre while having candid conversations with the public.

Meanwhile, the Duchess of Sussex was seen being given a close hug by a young girl in the crowd at Windsor Castle.

Meghan walked over to a section of the crowd and approached a teenager, who was seen putting her hand over her mouth in shock. The pair spoke briefly for a few moments and Meghan could be seen assuring her by putting her hand on her shoulder.

Meghan was seen nodding, before leaning in and giving her a big hug.

She said: “We were waiting for them to come and she came in and asked my name and how long I was waiting and I asked if she can have a hug, and she hugged me back.

“It was an amazing moment, I’m still shaking now.”

A family of Manchester United fans bonded with the Duke of Sussex outside Windsor Castle.

Harry and Meghan plunged the monarchy into crisis during the twilight years of the Queen’s reign after sensationally quitting frontline royal duties and moving to California two years ago — a saga which precipitated the rift between Harry and his brother William, allegations of racism against the royals and claims the Firm failed to help a suicidal Meghan.

King Charles III went to Buckingham Palace to meet fellow mourners, where he shook hands and accepted their condolences to cries of “God save the King” and impromptu renditions of the national anthem.