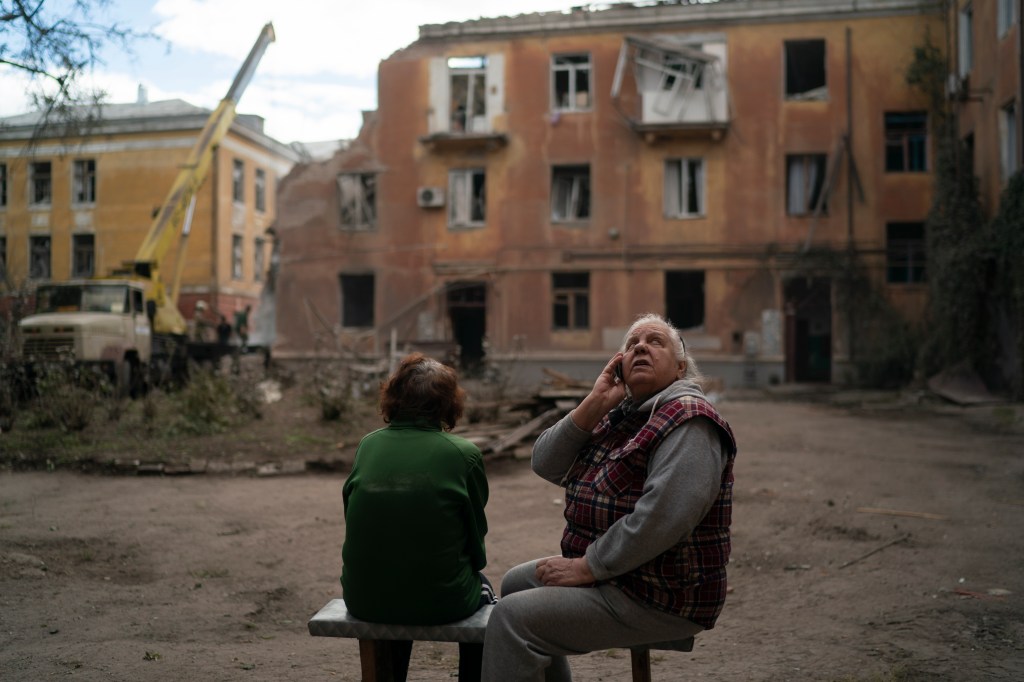 KYIV, Ukraine (AP) — Russia’s Defense Ministry announced Saturday that it was pulling back troops from two areas in Ukraine’s eastern Kharkiv region where a Ukrainian counteroffensive has made significant advances in the past week.

The news came after days of apparent advances by Ukraine south of Kharkiv, the country’s second-largest city, in what could become the biggest battlefield success for Ukrainian forces since they thwarted a Russian attempt to seize the capital, Kyiv, at the start of the nearly seven-month war.

“The Russian army in these days is demonstrating the best that it can do — showing its back,” Ukrainian President Volodymyr Zelenskyy said in a video released by his office Saturday night. “And, of course, it’s a good decision for them to run.”

Russian Defense Ministry spokesman Igor Konashenkov said troops would be regrouped from the Balakliya and Izyum areas to the eastern Donetsk region. Izyum was a major base for Russian forces in the Kharkiv region, and earlier this week social media videos showed residents of Balakliya joyfully cheering as Ukrainian troops moved in.

Konashenkov said the Russian move was being made “in order to achieve the stated goals of the special military operation to liberate Donbas,’” an eastern area home to two separatist regions that Russia has declared sovereign.

The claim of a withdrawal to concentrate on Donetsk is similar to the justification Russia gave for pulling back its forces from the Kyiv region earlier this year when they failed to take the capital.

Igor Girkin, a Russian who was an early leader of a Moscow-backed separatist uprising in Donetsk in 2014, sneered at the portrayal of the pullback being strategic. On the messaging app Telegram, he acidly called it “the brilliant (clearly within the framework of the plan and even ahead of schedule) operation to transfer the cities of Izyum, Balakliya and Kupiansk to respected Ukrainian partners.”

Foreign Ministry spokesman Oleh Nikolenko also suggested troops had retaken Kupiansk, a town along the main supply route to Izyum, long a focus on the Russian front line and the site of heavy artillery and other fighting. Nikolenko tweeted a photo showing soldiers in front of what he said was a government building in Kupiansk, 73 kilometers (45 miles) north of Izyum.

The Ukrainian Security Service posted a message hours later saying troops were in Kupiansk, further suggesting it had been seized. The military did not immediately confirm entering the town, a railway hub that Russia seized in February.

Videos on social media appeared to show Ukrainian forces on the outskirts of Izyum at a roadside checkpoint. A large statue with the city’s name could be seen in the images. Ukrainian forces did not acknowledge holding the city.

Britain’s Defense Ministry said Saturday that it believed Ukrainian troops had advanced as much as 50 kilometers (30 miles) south of Kharkiv, and described Russian forces around Izyum as “increasingly isolated.”

“Russian forces were likely taken by surprise. The sector was only lightly held and Ukrainian units have captured or surrounded several towns,” the British military said, adding that the loss of Kupiansk would greatly affect Russian supply lines.