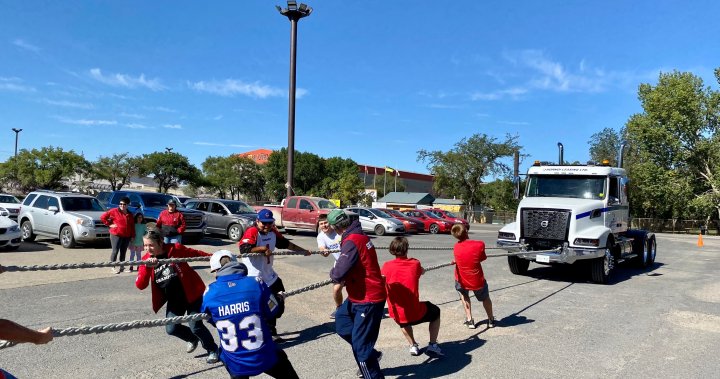 Teams of eight to 10 people competed with one goal in mind: Pulling a 15-tonne truck 15 metres the fastest.

“It has been a couple of years since we’ve been able to do the truck pull event but this will be our ninth time going and we are really excited about it,” said Victoria Lacelle, director of marketing and development at Special Olympics Saskatchewan.

After two years of waiting to compete, the athletes were finally given the chance to claim victory.

Dylan Morin, whose team took home the gold, said he has been a Special Olympics athlete for 11 years.

Morin and his team were able to pull the truck 15 metres in just 11 seconds.

Darcy Koch, the superintendent for the support service division of the Regina Police was one of many police officers who put in a team to compete for the win.

And while the truck pull was the feature, people were just happy to be together.

“The (athletes) absolutely love it and they love to come out and have the pancake breakfast and visit with everyone,” Lacelle said.

All the funds raised from the event go towards Special Olympic programs being affordable and available for athletes all over Saskatchewan.