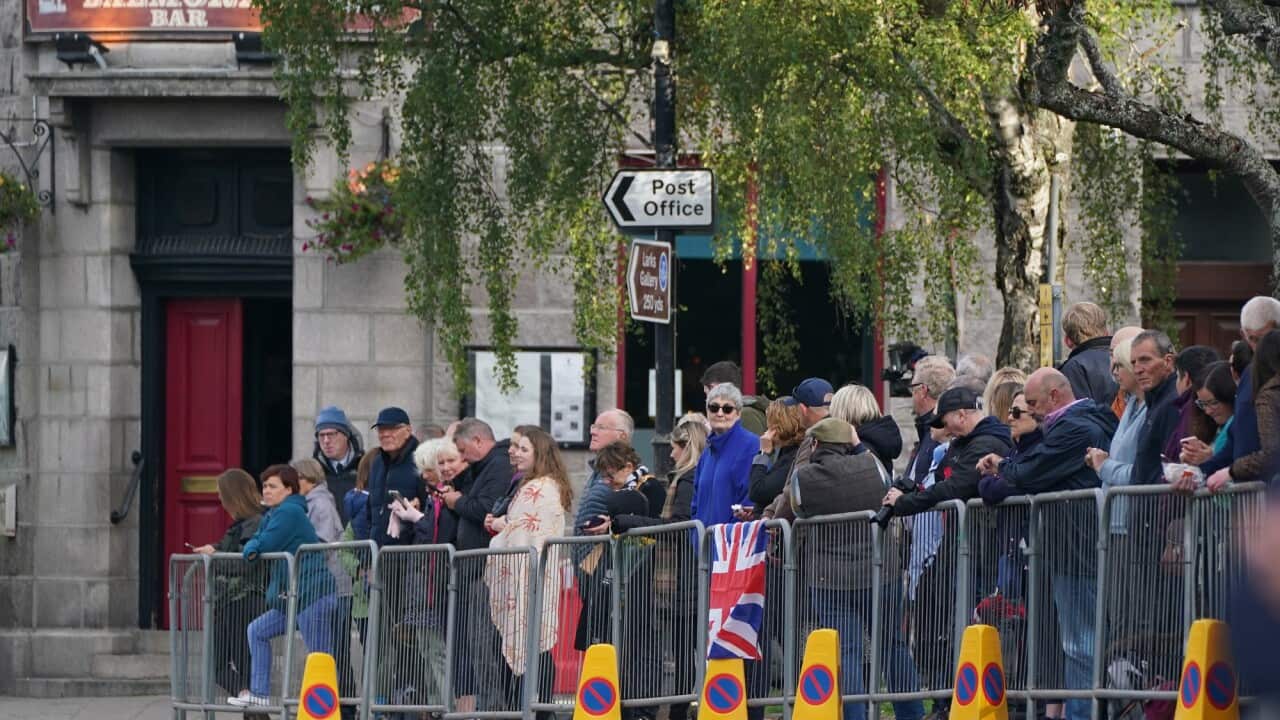 Britain’s Queen Elizabeth II embarks on her final journey on Sunday with thousands of her mourning subjects expected to line her coffin’s route from the Scottish retreat where she died.
The solemn departure of the queen’s oak casket from Balmoral Castle for Edinburgh marks the start of an odyssey of national mourning culminating in her state funeral in London on 19 September.

Her journey begins a day after her son Charles III was formally proclaimed king, and after her warring grandsons William and Harry, and their wives Kate and Meghan, briefly reunited for a walkabout.

A hearse carrying the coffin of Britain’s longest-serving monarch will make a six-hour journey through Scottish towns before arriving in Edinburgh, where it will rest for two days so people can pay tribute.
The king himself will then travel to Edinburgh on Monday for a prayer service, before the body of the queen, who died at Balmoral on Thursday aged 96, is flown to the capital on Tuesday.
She will then lie in state for four days in an event expected to draw at least a million people, ahead of a funeral set to be watched worldwide and draw numerous heads of state.
“We are living in history right now,” said Laura Burns, 49, who was planning to try to see the queen’s coffin passing in Edinburgh after coming to the city because her son is starting at university.

While Charles’ accession has pushed Britain into what newspapers have called the new “Carolean” era, Britain and the royal family are still coming to terms with the end of the Elizabethan age.
Prince William broke his silence with an emotional tribute to his beloved “Grannie” on Saturday.
“She was by my side at my happiest moments. And she was by my side during the saddest days of my life,” said William, who has now become the Prince of Wales.
But the queen’s death also brought a surprise show of unity from William, 40, and his younger brother Harry, 37, when they emerged with their wives to speak to well-wishers outside Windsor Castle, near London.

The sight of the two couples who have barely seen each other since 2020, together — even if they separated to speak and shake hands with different sides of the cheering crowds — will likely spark rumours of a reconciliation.

Pictures of the four were splashed on the covers of Sunday’s newspapers.
“Reunited for granny,” read the Sunday Mirror’s headline, while the Telegraph ran with “Reunited in sorrow” and the Sun with “All 4 One”.
The Sunday Times focussed on the apparent frostiness, with the headline: “Warring Windsors’ awkward truce to honour the Queen”.
Senior royals including the queen’s children, Princess Anne and Princes Andrew and Edward and their families also inspected flowers outside Balmoral, where they have remained since the queen’s death.

The queen’s coffin, draped with a Scottish Royal Standard and floral wreath, has been kept in Balmoral’s ballroom and will be carried to her hearse by six estate gamekeepers.

The symbolism of the queen’s last journey will be heavy for a nation that has strong royal connections — but where there is a strong Scottish independence movement intent on severing the centuries-old union with the United Kingdom.
Rehearsals for the historic event began before dawn, with the cortege set leave at 10:00 am (0900 GMT) before weaving through Aberdeen and Dundee and reaching Edinburgh at 4:00 pm.
Dedicated viewing points are being set up along the route, although mourners will be asked not to throw flowers at the convoy as it passes.

“We anticipate many, many people will be keen to pay their respects,” First Minister Nicola Sturgeon said. The queen’s coffin will be taken to the Holyroodhouse Palace, the monarch’s official residence in Scotland, where it will rest for a day.
King Charles and other royals will on Monday take part in a procession to convey her coffin along Edinburgh’s Royal Mile to St Giles’ Cathedral.
The following day the coffin will be flown by Royal Air Force jet to Northolt airfield near London, and driven to Buckingham Palace. Then, on Wednesday, it will be moved to Westminster Hall to lie in state.
King Charles will also visit Northern Ireland and Wales in a show of national unity, accompanied by British Prime Minister Liz Truss, who was only appointed by the late queen on Tuesday.

He has seen his popularity recover since Diana’s death in a 1997 car crash, but he takes the throne at a moment of deep anxiety in Britain over the spiralling cost of living and international instability caused by the war in Ukraine.

Charles vowed at the formal Accession Council at St James’s Palace on Saturday that he would “strive to follow the inspiring example I have been set” by his mother during her “lifetime of service”.
The centuries-old tradition was televised live for the first time, featuring a fanfare of trumpets and a court official wearing a feathered hat to declare him king from a palace balcony.

Thousands of people have gathered outside Buckingham Palace and other royal residences in recent days to lay flowers and messages of condolence, or simply to experience history in the making.

But officials expect far more people to pay their respects while the queen lies in state, before the televised funeral service at Westminster Abbey opposite.
The funeral for the queen – who came to the throne aged just 25 in 1952 – will be attended by national leaders including US President Joe Biden, Australian Prime Minister Anthony Albanese and possibly Japanese Emperor Naruhito.
Her record 70 years on the throne were a constant during a turbulent time for Britain, from a world of post-war deprivation and the loss of its empire, to more recent traumas like the coronavirus pandemic.

Charles’s coronation, an elaborate ritual steeped in tradition and history, will take place in the same historic surroundings of Westminster Abbey, as it has for centuries, on a date to be fixed.