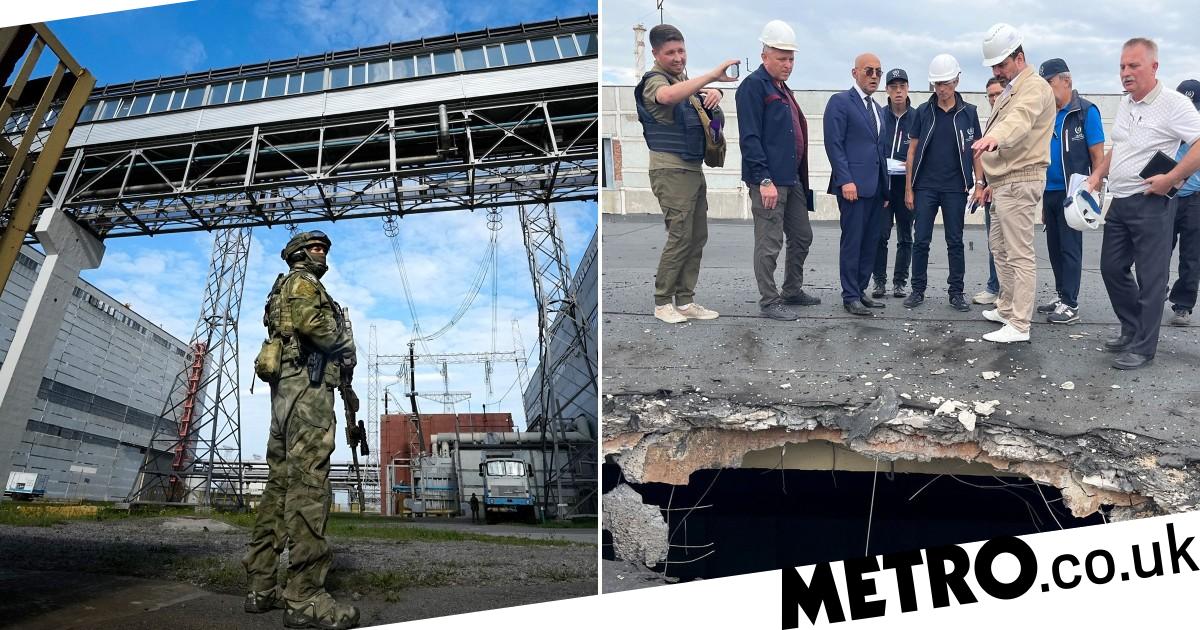 A huge Ukrainian nuclear plant held by Putin’s invaders has been shut down after a ‘complete blackout’ sparked heightened fears of a radiation disaster.

Operations at Zaporizhzhia were ‘completely stopped’ shortly before 4am on Sunday, according to Ukrainian engineers who have been allowed to manage it under Russian control.

It followed a heroic 48-hour scramble to restore the site’s power supply against what was described as ‘low’ odds by international nuclear watchdogs stationed there.

Shelling around the plant on Friday cut the plant off from the power grid and ‘compromised the safe operation’ of the plant, according to the UN’s International Atomic Energy Agency (IAEA).

Together with ‘inadequate’ staffing levels due to the war, this ‘significantly increased the risk of a nuclear accident’, the agency’s chief Rafael Grossi warned, calling the situation ‘completely unacceptable’.

Starving working nuclear reactors of electricity risks the failure of their power-hungry coolers and other nuclear safety features.

This was one of the factors behind the 2011 meltdown at Japan’s Fukushima plant, when an earthquake forced it to start drawing power from diesel generators which were then flooded by a tsunami.

Five of the six reactors at Zaporizhzhia had previously been switched off, while the sixth while the sixth continued in ‘island mode’ – producing enough electricity for cooling and safety mechanisms.

Months of shelling gradually severed the plant’s main power lines, leaving just one left at the start of September.

But it was knocked out by a nearby fire on Monday, according to UN experts stationed at the plant, and was said to have been completely severed by a fresh round of artillery fire by Friday.

Officials said this left the final reactor ‘operating at a very low power level’ using generators, which the plant reportedly has enough diesel to fuel for just 10 days.

Reacting to the development, Mr Grossi said there was ‘now a low chance that reliable off-site power can be restored’.

But Ukrainian engineers working for nearly two days straight managed to restore a communication line to the plant’s power system, giving it just enough energy for them to initiate the shutdown.

Energoatom, the state agency in charge of Ukraine’s nuclear energy network, said on Telegram: ‘A decision was made to shut down power unit No 6 and transfer it to the safest state – cold shutdown.’

Mr Grossi has called for ‘the immediate cessation of all shelling in the entire area’ saying the ‘completely unacceptable’ and ‘cannot stand’.

Ukraine’s president Zelensky said on Monday that the threat of Russia’s occupation of Zaporizhzhia’s six nuclear reactors was akin to ‘six Chernobyls’.

Experts have downplayed concerns that an accident at the plant could cause a repeat of the 1986 disaster, which spread often devastating levels of radiation throughout Eastern Europe.

The European Nuclear Society said last month that such an incident ‘would mostly affect Ukrainians that live nearby’.

However the ‘worst-case scenario’ would be similar in ferocity to Fukushima, where radiation forced the permanent evacuation of 110,000 people and caused one death.

Meanwhile, Ukrainian forces have continued to make significant gains in the region of Kharkiv over the weekend, routing thousands of Putin’s troops.

Russia’s defence ministry admitted it had retreated from the key military strongholds of Izyum and Kupiansk and withdrawn from a third town Balakliya, claiming it wanted to ‘bolster efforts’ in areas held by Putin-backed separatists.

Western intelligence agencies said they had been forced into a major withdrawal by fierce Ukrainian counterattacks.

‘Russian forces were likely taken by surprise. The sector was only lightly held and Ukrainian units have captured or surrounded several towns,’ the MoD said.

Officials added that Russian forces continued to fight around the towns but were becoming ‘increasingly isolated’ and are likely to soon be cut off from supplies.

President Zelensky said on Sunday an overall counteroffensive in the region has liberated around 700 square miles of territory in the last 11 days.

US military analysts suggest he may have been giving a conservative figure, with Washington’s estimates pointing to more than 965 square miles of recaptured land.