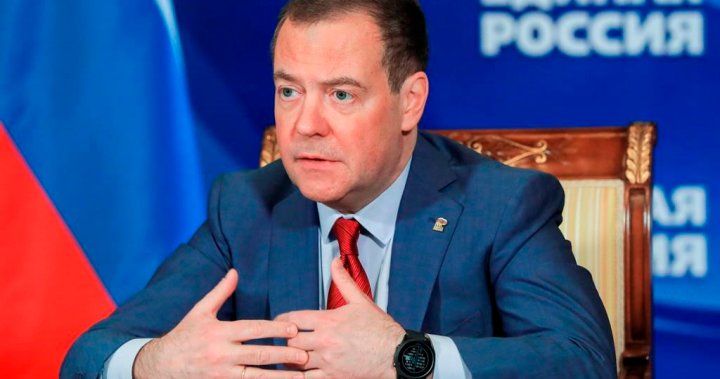 A senior Russian security official said on Tuesday that peace in Ukraine when it came would be on Moscow’s terms as Russian forces struck targets across the country with missiles even as their ground offensive stuttered.

More than two weeks have passed since Russia’s last major territorial gain — capturing the eastern Ukrainian city of Lysychansk — and Ukraine’s General Army Staff said on Tuesday that Moscow’s forces were busy shoring up their positions in recently seized territory and mounting limited but unsuccessful ground assaults, albeit in numerous different locations.

Dmitry Medvedev, Russia’s former president who is now deputy head of its Security Council, struck a defiant tone though, signaling that Moscow was ready to do whatever it took in order to prevail.

“Russia will achieve all its goals. There will be peace — on our terms,” Medvedev said.

He has become increasingly hawkish in his criticism of the West since Russia sent tens of thousands of troops into Ukraine on Feb. 24 in what it calls a “special military operation” to ensure its own security.

The Kremlin has said there is no time limit to a conflict which Ukraine and the West have called an unprovoked war of aggression designed to grab territory and erase Ukrainian identity.

Britain’s ministry of defense, which supports Kyiv, said on Thursday it believed Russian forces were unable to advance swiftly due to personnel shortages.

Russia is facing a resources dilemma, it said, as it must decide how much military hardware and personnel to commit to achieving its stated objective of seizing full control of Ukraine’s Donetsk region and how much to deploy to southern Ukraine to contend with a Ukrainian counter-attack.

“While Russia may still make further territorial gains, their operational tempo and rate of advance is likely to be very slow without a significant operational pause for reorganization and refit,” the British ministry said.

In a now familiar pattern, Russian missiles on Tuesday slammed into targets across Ukraine. At least one person was killed in a missile strike on the center of the eastern Ukrainian city of Kramatorsk, the regional governor said.

Buildings in a town in the Kharkiv region were also hit with footage showing piles of rubble being cleared by excavators.

Oleh Synegubov, governor of Kharkiv region, wrote on social media that a 75-year-old man had died due to injuries sustained as a result of shelling in the last 24 hours.

Footage in the Odesa region showed badly damaged brick-built buildings smoldering and what looked like the ruins of a long house scorched and without a roof after firefighters put out the flames.

Oleksii Matsulevych, a spokesman for the regional administration, said on Telegram that the Russian strike had injured at least four people, burned houses to the ground, and set other homes on fire.

‘WE WILL NOT GIVE UP’

Andriy Yermak, head of Ukraine’s presidential office, wrote on Twitter that the houses had been struck by seven Russian Kalibr cruise missiles.

“A terrorist state is longing to defeat those (who are) fearless with fear,” he wrote. “We will neither break nor give up.”

Russia’s defense ministry said its forces had destroyed ammunition depots in the area that were storing weapons supplied to Kyiv by the United States and European countries.

Reuters could not immediately verify that assertion.

Russia says it does not deliberately target civilians or civilian infrastructure and only uses precision weapons to degrade Ukraine’s military.

After failing to capture the capital Kyiv at the start of the war, Russia switched tactics and began to rely on devastating long-range artillery and air strikes to try to cement and extend its control of Ukraine’s south and east.

Kyiv is hoping that the war is at a turning point and that Moscow has exhausted its offensive capabilities after seizing a few small cities in the east, while Ukraine now fields long-range Western weapons that can strike behind Russian lines.

Kyiv cites a string of successful strikes on 30 Russian logistics and ammunition hubs, which it says are crippling Russia’s artillery-dominated forces that need to transport thousands of shells to the front each day.

In the south, Ukraine has said it is preparing a counter-attack to recapture the biggest swath of territory taken since the invasion, but has not disclosed any date for the operation.

The Ukrainian military had struck a bridge in Russia-controlled territory in the south of the country with U.S.-supplied HIMARS rockets, a Russian-installed regional official said on Tuesday.

Russian-installed authorities in the same area on Tuesday also warned that Ukrainian shelling of a hydroelectric power station there could lead to a complete shutdown of navigation on the Dnipro river, the country’s largest waterway.