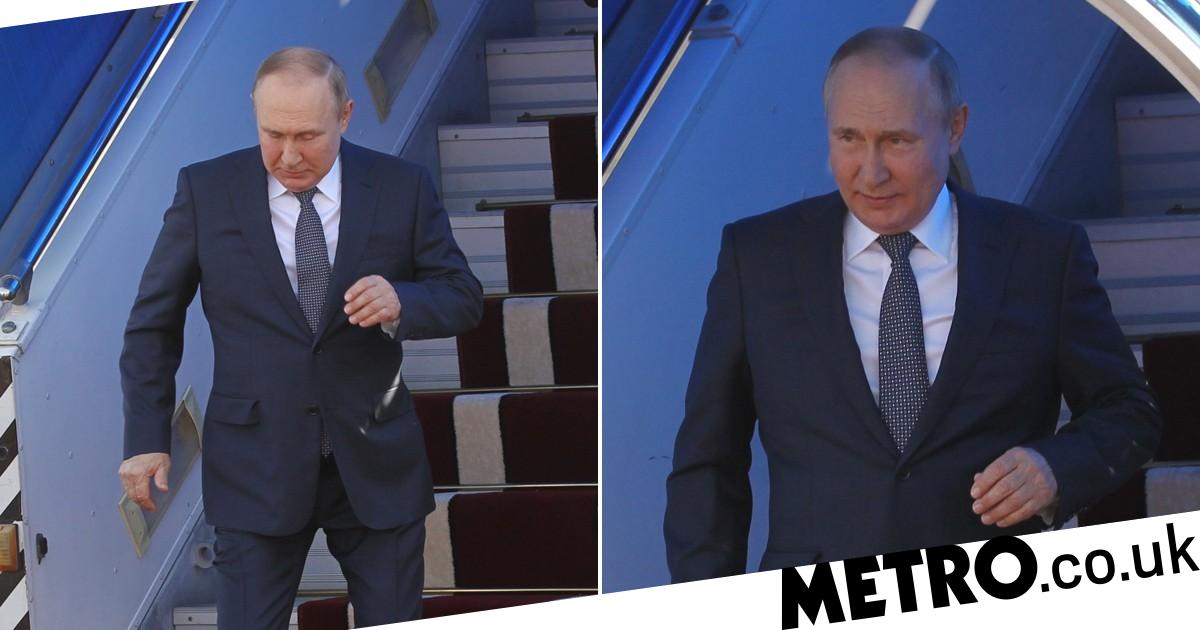 Vladimir Putin has been filmed walking with a ‘discernible’ limp at an airport in Iran today.

Footage shows the Russian president arriving in the Middle Eastern country for his second foreign trip since he invaded Ukraine in February.

His appearance has fuelled rumours about his health, which have overshadowed reports of his upcoming meetings with Iran’s supreme leader Ali Khamenei and Turkey’s President Recep Tayyip Erdogan.

Putin appeared unsteady and could be seen awkwardly shuffling down the steps of the plane with his right arm stiffly hanging by his side.

His arrival in Tehran came after months of speculation about his alleged cancer diagnosis and Parkinson’s disease.

Onlookers have cited videos of the warmonger looking shaky or tense as evidence that he might be ill but some medical experts have disputed such talk.

Footage from interviews and public appearances have also shown him holding onto tables and chairs for support and looking bloated and puffy.

Metro.co.uk has also been unable to verify claims about his mental and physical health but the Kremlin has refuted any rumours.

Surrounded by security guards at the Iranian airport, Putin briefly waved to the crowds before being whisked away in his presidential convoy to the city.

His visit is seen as an opportunity to deepen Russia’s ties with Iran, one of the country’s few remaining international allies.

It comes amid warnings from the White House that Iran is preparing to sell ‘hundreds’ of drones to Russia to use in Ukraine.

Joe Biden’s national security adviser said the US had information Tehran was preparing to boost Moscow’s arsenal with unmanned aerial vehicles (UAVs) on an ‘expedited timeline’.

From Jerusalem and Jeddah, Biden urged Israel and Arab countries to push back on Russian, Chinese and Iranian influence that has expanded with the perception of America’s retreat from the region.

He added that the meetings will ‘develop economic cooperation, focus on security of the region… and ensure food security.’