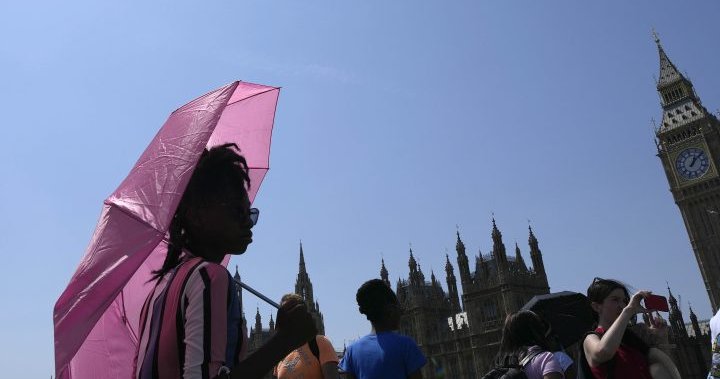 On the U.K.’s hottest day ever recorded, a teacher in Buckinghamshire, England, is using a $1.5 hack to beat the heat as the recorded temperature surpassed 40 C for the first time in the country.

To cool the house down, Jay Virdee has been hanging thermal foil blankets behind the blinds on her windows. This has helped reflect the heat and keep a comfortable 26.3 C inside the house, she said.

“It’s a temporary solution to something that we are possibly going to face long-term here,” Virdee told Global News.

The intense heat is forcing residents, like Virdee, to be creative in a country ill-prepared for such extremes.

Those with access to air conditioning had an easier time on Tuesday.

Tom Elliot said he was going into the office because it is “nice and cool.”

“I’m cycling around instead of taking the Tube,” he told The Associated Press after taking a swim.

Extreme heat is scorching Europe. How should Canadians prepare for summer travel?

With mercury levels still climbing in many places, Virdee, who has a lung disease and recently recovered from COVID-19, is concerned for her health.

“If you’re going to have a long summer, then you’ve got to find a way to acclimatize to this situation,” she said.

3:52
Europe heat wave to persist into next week, will likely cause deaths: WMO

Europe heat wave to persist into next week, will likely cause deaths: WMO

Besides the emergency foil blanket hack, which several of Virdee’s friends and family members have also used, she and her parents are making adjustments in the kitchen.

They are eating cold salads, keeping hydrated and avoiding using the stove and microwave.

And her mom who loves cooking is doing it outdoors in the evening time so the house doesn’t heat up.

“We slept most of the heat off and then worked in the cooler hours,” she said.

For their little Chihuahua, it was an earlier than usual morning walk and playtime at 5 a.m. Otherwise, they’re feeding him cold puppy milk and treats stored in the fridge

“He really wants to play and we know it’s probably not safe to allow him to run around too much right now.”

Any kind of physical activity adds heat to the body, which is why it is advisable to limit exercise or physical exertion during a heat wave, said Glen Kenny, a professor and research chair in human environmental physiology at the University of Ottawa.

For the first time ever, 40 Celsius has provisionally been exceeded in the UK

Temperatures are still climbing in many places, so remember to stay #WeatherAware

The U.K. Health Security Agency (UKHSA) is urging residents to stay cool indoors by closing curtains on rooms that face the sun, reminding them that it may be cooler outdoors than indoors

It is also recommending avoiding the sun between 11 a.m. and 3 p.m., when the UV rays are strongest.

And if you have to go out in the heat, “walk in the shade, apply sunscreen and wear a wide-brimmed hat,” the national agency said on its website.

Please look out for people who may struggle to keep themselves cool and hydrated.

At some schools, kids are dipping their feet in tubs to keep themselves cool during class. Virdee has also seen some friends put their clothing and bed sheets in the fridge.

Others are turning to nature.

“My friend told me she uses a lot of plants in front of her desk to get the sunlight out naturally,” said Virdee.

Meanwhile, her neighbour has moved his car under a huge tree as a solution.

While older adults and those with chronic health conditions are most vulnerable, heat-related stress can also affect young people and kids, said Kenny.

Signs of heat stress can include headaches, thirst, fatigue and dizziness, and feeling unwell, irritable, disoriented and despondent, he said.

— with files from The Associated Press