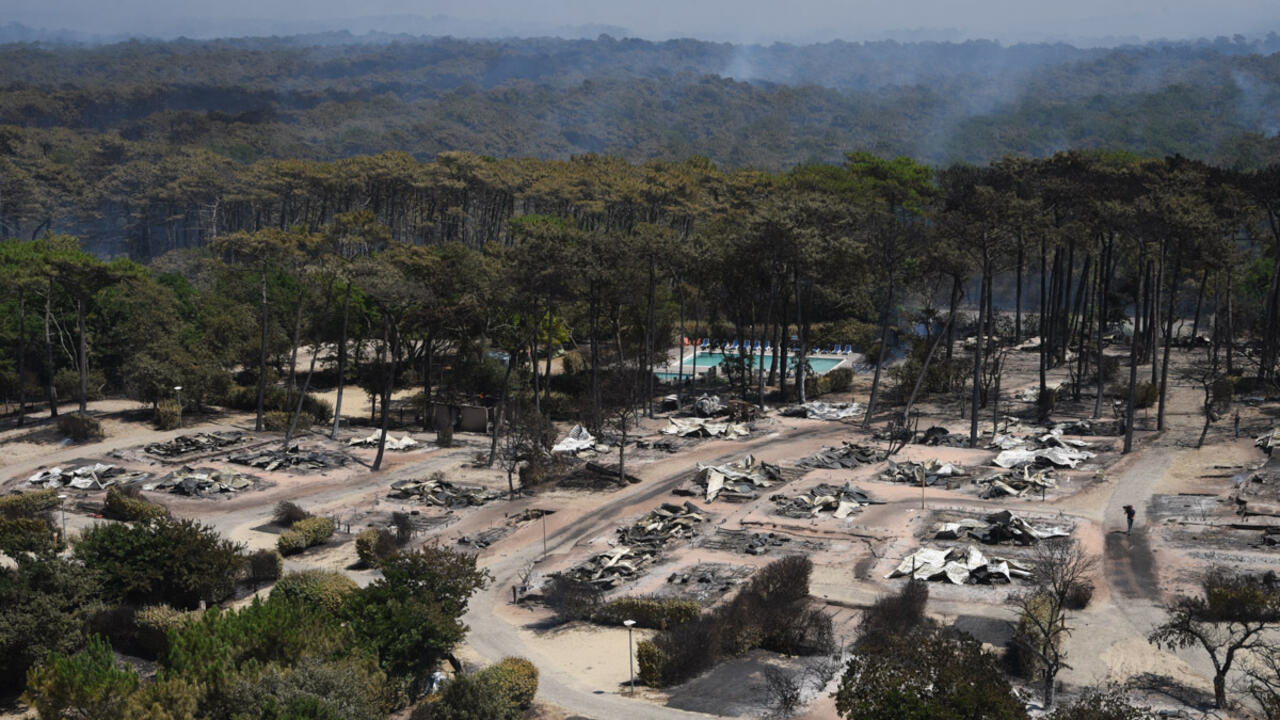 As a heatwave scorches Western Europe, some 38,500 people have been evacuated away from forest fires raging in France’s southwestern Gironde region. No deaths have been reported as of Wednesday, but holidaymakers at campsites near the Dune du Pilat – Europe’s tallest sand dune, perched amid a forest on the Atlantic Coast – had their belongings go up in smoke. FRANCE 24 reports.

Piles of twisted metal were still smoking where holidaymakers’ caravans used to be. A few tents had somehow escaped the flames, left standing in a landscape of charred bikes and barbecues. This was the scene at a campsite near the Dune du Pilat on Tuesday, the day after it was destroyed with five other campsites in the Gironde.

“Come on, let’s get a move on! Now!” shouted local fire department head Mathieu Jomain, as wind swirled at the top of this 100-metre-high sand dune with a breathtaking view of forested hills. Smoke continued to rise to the east as helicopters circled in the sky.

“The pines continue to burn from the inside even when you can’t see the flames,” Jomain said. “My colleagues will have to douse several areas with water to stop the fires from restarting.”

Unfortunately it is already too late for the holidaymakers staying at the Dune du Pilat campsite, who lost the possessions they left behind.

Ruth Kreide from the German town of Rheinbach near Bonn was one such holidaymaker. Like many northern Europeans, the 48-year-old had fallen in love with the Gironde. She has spent the last three summers here along with her husband and two children. The family had to be evacuated from the Panorama campsite on the night of June 12 to 13.

“We were woken up by the sound of people leaving at around 4:15am,” Kreide recounted. “We then realised that the evacuation had started two hours previously – but nobody had come to tell us because we were staying at the back of the campsite.”

The campsite’s staff had told them the day before that there were no imminent evacuation plans.

“We only had time to throw a few things in the car and leave as soon as possible – so we left behind the caravan, the tents, the bikes, our personal belongings,” said Ruth’s husband Christian Kreide. “But in the end we lost everything.”

The Kreides stayed in the area for a few days, hoping to get their possessions back. A convoy was organised on Sunday to allow holidaymakers to go back to the campsite to retrieve their belongings, but sudden changes in the direction of the wind prompted police to turn the convoy back.

The following day Ruth and her husband watched the Panorama campsite going up in flames via a satellite imaging app on their phones that they refreshed every 90 minutes.

The Kreides were all the more shocked because this is the second time in two years that they have been severely impacted by extreme weather.

“Last year we were on holiday at the Panorama when we found out that our house in Rheinbach had been struck by the floods,” Kreide remembered. “We had to cut our holiday short and go back to Germany.”

“The water did a lot of damage to the basement; the repairs are still ongoing,” Kreide continued. “This was actually on July 13, 2021 – so one year to the day before we went through the evacuation of the Panorama campground. I remember that at the time we reassured ourselves by thinking that all our important belongings were with us on holiday in the trailer,” she said with tears in her eyes.

The family went back to Rheinbach again on Tuesday, not knowing when they will come back to the Gironde. They want to return – but on the other hand, they do not want to see the devastation of the natural environment.

“I wonder what we’ll get next year,” Christian Kreide said before getting in the car. “Maybe an earthquake?”

This article was adapted from the original in French.