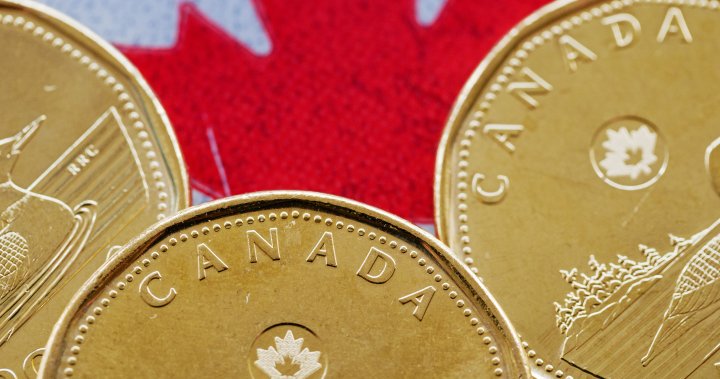 As Canada’s loonie falters against the surging U.S. dollar, experts say the effect could worsen inflation on some goods imported from south of the border.

The Canadian dollar is sitting at 75 cents compared to the U.S.-dollar benchmark as of Tuesday, a nearly two-year low for the loonie.

Economists say there could be a few reasons for the Canadian dollar’s weakness.

RBC assistant chief economist Nathan Janzen tells Global News that Canadian oil exports have historically been a “big driver” for the dollar’s value and lower prices at the pumps have not helped loonie.

But he and other economists who spoke to Global News point to the relative strength of the U.S. greenback — not the loonie’s weakness — as driving the two currencies apart.

“The U.S. dollar has been going gangbusters against pretty much all currencies,” says Paul Ashworth, chief North American economist with Capital Economics.

In fact, the Canadian dollar has performed relatively well compared to the surging U.S. dollar, owed in part to the tightness of the American and Canadian economies, Ashworth says.

While the Canadian dollar is down about 5.5 per cent year-to-date against the U.S. dollar, the Japanese yen is down nearly 20 per cent, the British pound is down 16 per cent and the euro is down 12.4 per cent so far this year.

Janzen notes that much of the currency movement is tied to uncertainty in the global economic forecast. Russia’s war in Ukraine, tensions over Taiwan and lingering effects from the COVID-19 pandemic are among those complicating factors.

“When there is a lot of uncertainty about the outlook globally, there tends to be a flight to safety in terms of your cash flowing into assets,” he says. “And usually that means flowing into U.S. dollar assets.”

How does a weak loonie affect inflation?

A weaker dollar affects the purchasing power of Canadian businesses seeking to import goods from south of the border.

Machinery, vehicles and mineral fuels are among the most valuable commodities Canada imports from the U.S., but Canadians also get a slew of agricultural products such as cereals, pastas, fresh fruit and vegetables, meat and alcohol from American suppliers.

“Unfortunately for most Canadians and for the economy as a whole, we’re … dependent on the U.S.,” Reitzes says.

He adds the silver lining in trade could be that since the loonie has largely “outperformed” currencies excluding the U.S. dollar, businesses and consumers could find they’re coming out on top buying from China and other overseas markets.

Ashworth agrees, and adds that global shipping rates have come down “very considerably” in the past six to 12 months compared with the headline-grabbing supply chain disruptions seen last fall.

Cheaper costs for trucking and freight shipping on the global stage could offset the Canadian dollar’s weakness compared to its U.S. counterpart, Ashworth says.

“Overall, I think you probably argue it’s slighter better, although the stronger U.S. currency is the one thing that is adding a bit to inflationary pressure there.”

How low will the loonie go?

All eyes in global markets will be watching Wednesday’s interest rate decision from the U.S. Federal Reserve for signals on how much higher its benchmark rate will rise.

Rising rates are generally a good thing for currency values, notes Ashworth, as investors are attracted to markets where they’ll get better returns based on higher interest rates.

“As you push up your interest rate in a country, you would normally expect to see the currency strengthen,” he says.

1:44
Experts say there are ways to make rising interest rates work in your favour

The Bank of Canada’s relative hawkishness on this front has been a boon for the loonie, Reitzes says.

“On a relative basis, we’re not doing all that bad because Canadian interest rates are rising as well. The Bank of Canada has been among the more aggressive central banks,” he says.

Canada’s lower-than-expected inflation print on Tuesday, then, is one possible reason the loonie edge down 0.8 per cent on the day, as Reuters notes some economists view the data as opening the door for lower rate hikes to come.

But following an unexpectedly high U.S. core inflation print in August, Ashworth says that money markets are baking in a 75-basis-point rate hike from the Fed on Wednesday, with a minority of voices calling for a full percentage-point increase.

What is ‘core inflation’? This key figure could gauge future interest rate hikes

From that perspective, he says markets could view a 0.75 percentage point hike as “dovish” — a move that discourages higher rates and could sink the U.S. dollar somewhat.

But a 100-basis-point increase from the Fed is “certainly not impossible,” Janzen notes.

In addition to the number, economists will be listening to Fed Chair Jerome Powell’s language on how high rates will need to go and how quickly it will need to get there. These are all factors that could drive the U.S. dollar even higher.

Reitzes says this is yet another factor pushing the Bank of Canada to, if not fully keep pace with U.S. interest rate decisions, at least continue raising its own policy rate and keep the loonie competitive.

The Federal Reserve is expected to deliver its benchmark interest rate decision on Wednesday at 2 p.m. ET.

— with files from Reuters