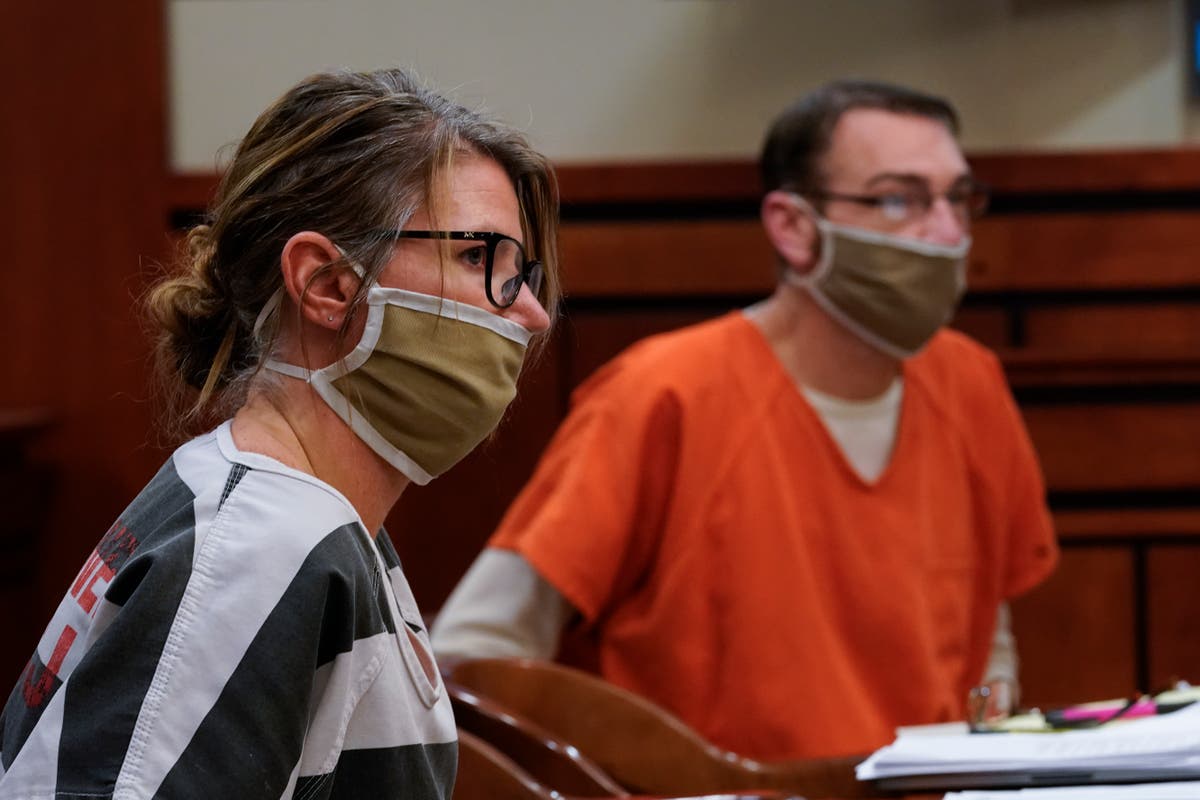 The parents of Michigan school shooting suspect Ethan Crumbley have asked a judge to throw out the manslaughter charges against them, as they continue to argue that they played no role in the mass murder of innocent students.

Attorneys for James and Jennifer Crumbley filed an appeal with the Michigan Court of Appeals late on Monday night, claiming that they should never have been charged over the 30 November mass shooting at Oxford High School.

The parents are also arguing that – should the charges stick and the case proceed to trial – damning text messages sent from their son to a friend should not be presented to the jury.

The Crumbleys are each charged with four counts of involuntary manslaughter in the brutal shooting deaths of Hana St. Juliana, 14, Tate Myre, 16, Madisyn Baldwin, 17, and Justin Shilling, 17.

Prosecutors set precedent in charging the parents of a mass shooter for the first time as they said that the Crumbleys bought their then-15-year-old son the gun used in the massacre, left it accessible to him, ignored multiple warning signs about his disturbing behaviour and poor mental health in the lead-up to the shooting, and failed to warn the school that he had access to a gun when they were called in about his disturbing behaviour.

They have both pleaded not guilty to the charges.

In Monday’s court filing, the Crumbleys argue that prosecutors are trying to make an example out of them and use them to reform gun control measures – something they say belongs in the Legislature.

“[Ethan Crumbley’s] criminal conduct was the sole cause of harm to the victims,” the filing states.

“Certainly, if the prosecution could directly link Mr or Mrs Crumbley to the mass shooting, they would be prosecuted for first-degree murder as if they had directly committed the offense.

“However, because the prosecution cannot support such a claim, they are left attempting to fit a square peg into a round hole.”

Their legal team claims that the Crumbleys had no idea their son would go on to carry out such a massacre and that the charges “are borne out of a desire to hold persons accountable for criminal acts, where no legal justification exists to do so”.

“However, to extend the law in such a way involves important policy decisions of broad social consequences, reaching far beyond this single case. Such a task, then, should be resolved through the legislative process, and not judicial innovation,” the filing states.

If the case proceeds to trial, the Crumbleys are asking the appeals court to exclude text messages sent by their son eight months before the massacre, arguing that they are irrelevant to the case.

In the messages, Ethan tells his friend that he has confided in his parents about hearing voices but that they fail to take him seriously.

“I am going to ask my parents to go to the doctor’s tomorrow or Tuesday again … But this time I am going to tell them about the voicees [sic],” reads one message.

In another message, he writes: “They make me feel like I’m the problem. My mom makes everyone feel like a piece of s***. I actually asked my dad to take me to the doctor the other day, and he just gave me some pills and said to ‘suck it up.’ My mom laughed when I told her.”

As well as the text, the Crumbleys also don’t want jurors to see their son’s 22-page journal where he detailed his plans to carry out the “biggest school shooting in Michigan’s history” and how he wanted his first victim to be “a pretty girl with a future so she can suffer like me”.

In the journal, the alleged mass killer made repeated mentions of his parents’ lack of support for his struggles, saying that they “won’t help” or “listen to me”.

“I have zero help with my mental problems and it’s causing me to shoot the school. My parents won’t listen to me,” he wrote.

“I have fully mentally lost it after fighting my dark side. My parents won’t help me.”

He added: “I hope my parents can forgive me for what I do.”

In June, the Crumbleys’ legal team announced that they planned to call the teenager to testify at their trial.

The Crumbleys are due to stand trial in October after a judge ruled back in February that there was enough evidence to proceed with the charges against the parents.

The parents bought their son the firearm as an early Christmas present on Black Friday – just days before the attack, according to prosecutors.

One day before the shooting, they were reportedly contacted by staff at Oxford High School after a teacher found Ethan searching for ammunition on his phone.

They ignored attempts from the school to reach them, while Ms Crumbley jokingly texted her son about the incident: “LOL. Just don’t get caught.”

On the morning of the mass shooting, the parents were then called into the school for a meeting with staff, counsellors and Ethan after a teacher found the teenager with a drawing of a shooting victim, gun and bullet and the phrase “the thoughts won’t stop, help me”.

Prosecutors said the parents were told that their son needed urgent mental health support and asked them to take him home from school. They refused and left.

Ethan, who has since turned 16, was able to return to class.

Hours later, he allegedly opened fire in the hallways and a bathroom of the school, killing four students and wounding six students and a teacher.

Days after their 15-year-old son allegedly opened fire inside his high school, the Crumbleys went on the run.

A huge manhunt was launched to find the couple before they were tracked down hours later to an art studio in Detroit where they were hiding out.

They have been held behind bars ever since.

Their attorneys have insisted that the couple were not on the run but were going to arrange a time to hand themselves in to police.

Ethan is charged as an adult with 24 counts including terrorism and first-degree murder. His attorneys have said he plans to plead insanity.

His trial has been moved to January.