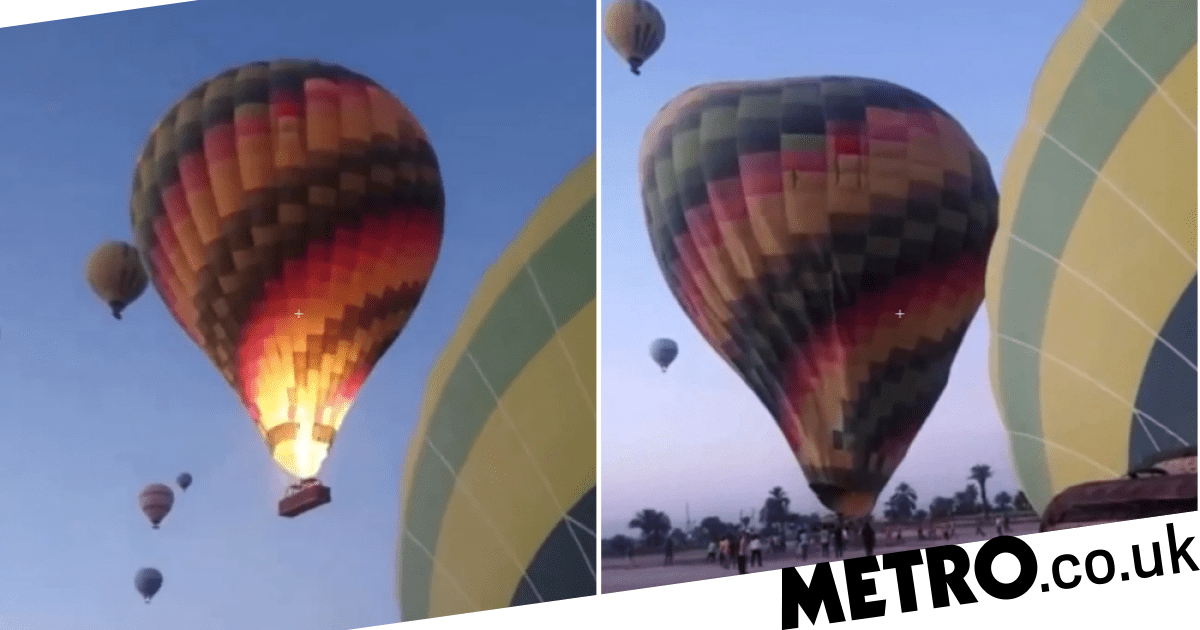 A hot air balloon packed with tourists lost control and fell to the ground leaving two injured after a terrifying mid-air crash at 200ft high.

Footage of the drama shows the balloon heading toward the ground with 28 tourists on board after it collided with another balloon in mid-air above the ancient city of Luxor in Egypt.

As the balloon falls too quickly, its pilot can be seen desperately firing up the burner to create hot air aimed at slowing the fall.

The video goes on to show the balloon’s basket hitting the ground with a hard bump and almost taking off again.

It only stays on the ground because dozens of people throw themselves onto the edge of the basket to keep it from flying away.

Local media report that the balloon had been blown off course over Egypt’s historic Luxor City on a sightseeing flight.

Hot air balloon rides over the city were suspended after the incident on July 18.

According to officials, the balloon’s fabric was ripped open in the collision causing to lose height too quickly.

Egypt’s Ministry of Civil Aviation said two people suffered minor injuries in the incident and were taken to a nearby hospital.

The ministry did not provide any information on the nationality of the tourists or what injuries they sustained in the crash landing.

Following a preliminary investigation, the authorities established that the balloon was affected by varying wind speeds while it was taking it from the ground.

The wind increased from around three knots (3.5mph) on the ground to about seven knots (8mph) when the balloon was at a height of around 60 metres (197 feet) high.

As a result, the ministry said the hot air balloon collided with another one, causing the nylon to tear and sending the basket crashing to the ground.

Hot air balloon rides are a popular way for tourists to view Luxor’s landmarks from the air.

However, accidents are not uncommon and 19 tourists were killed in a balloon crash in 2013.

In 2009, 16 tourists were injured when a hot air balloon veered off course and crashed into a telecommunications tower.