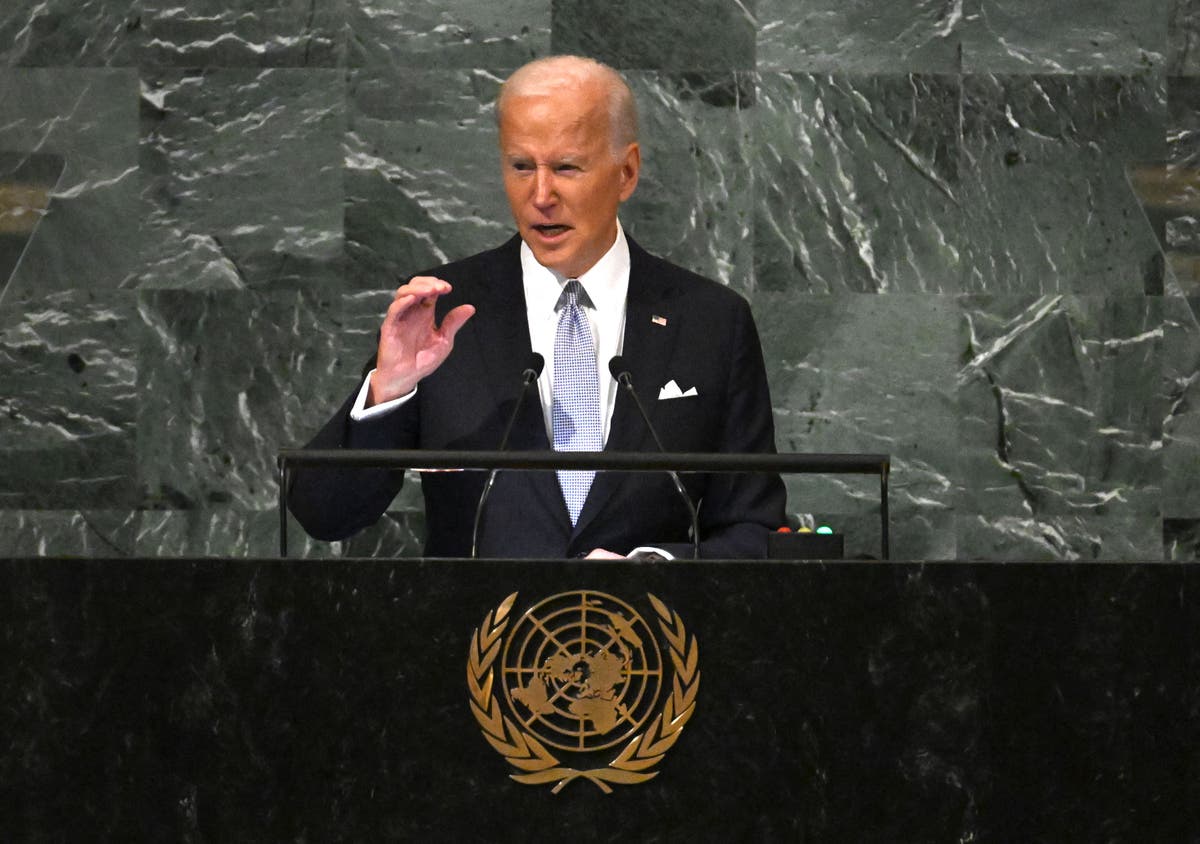 Mr Biden said the war was “chosen by one man, to be very blunt”.

“President Putin has made overt nuclear threats against Europe, and a reckless disregard for the responsibilities of a non-proliferation regime. Now Russia is calling up more soldiers to join the fight, and the Kremlin is organizing a sham referendum,” Mr Biden said.

The president said the referendums in the east of Ukraine in areas controlled by Russia were an attempt to “annex parts of Ukraine, an extremely significant violation of the UN charter”.

“This world should see these outrageous acts for what they are. Putin claims he had to act because Russia was threatened, but no one threatened Russia, and no one other than Russia sought conflict,” Mr Biden said.

“This war is about extinguishing Ukraine’s right to exist,” he added.

“If nations can pursue their imperial ambitions without consequences … we put at risk everything this very institution stands for,” Mr Biden said. “Every victory on the battlefield belongs to the courageous Ukrainian soldiers. But this past year, the world was tested, as well, and we did not hesitate. We chose liberty. We chose sovereignty. We chose principles to which every party to the United Nations charter is beholden.”

“We will stand in solidarity to Russia’s aggression,” he added.

Mr Biden called the war in Ukraine “brutal” and “needless”.

Mr Biden’s speech came after Mr Putin increased his stake in the war on Wednesday, announcing that around 300,000 reservists would be called to join the ranks of the military. He also rebuked the West for its support of Ukraine, and issued an ominous threat of using nuclear weapons, according to The New York Times.

In a speech, Mr Putin declined to announce a full national draft, instead revealing a “partial mobilisation” of Russians with experience in the military.

Despite massive setbacks as Ukraine has retaken large swaths of land, Mr Putin claimed that his goals remain unchanged. He said the mobilisation effort was “necessary and urgent” as the West had “crossed all lines” in providing Ukraine with advanced weaponry.

The Russian president claimed that Europe and the US were committing “nuclear blackmail” and noted that Russia has “lots of weapons” as well.

“To those who allow themselves such statements about Russia, I want to remind you that our country also has various means of destruction, and some components are more modern than those of the NATO countries,” he claimed.

He added that Russia would be willing to use any means necessary to protect what they see as their territory, which includes parts of Ukraine.

“If the territorial integrity of our country is threatened, we will certainly use all the means at our disposal to protect Russia and our people,” he said, according to The New York Times. “This is not a bluff.”

At the end of his speech, Mr Biden encouraged all countries to work towards a “nuclear nonproliferation regime through diplomacy.”

“No matter what else is happening in the world, the United States is ready to pursue critical arms control measures,” he said. “A nuclear war cannot be won and must never be fought.”