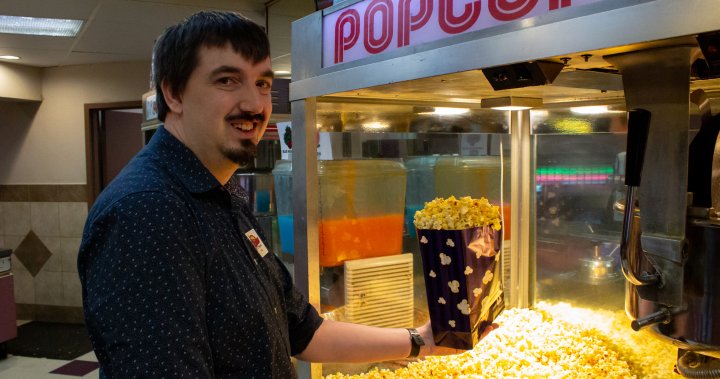 The final Toonie Tuesday has come and gone for the Rainbow Cinemas in Regina as it joins the growing list of small movie theatres closing across North America.

After the announcement came last month that the theatre would be closing, Sunday, Sept. 25 will be their final day.

“I’m sad we are closing and sad the staff will have to find other things to do. But with the news, we have definitely seen an influx in people. So it’s been really fun and good to see large crowds again coming through the doors and everybody getting their last movie in.”

To celebrate the history of the theatre, Rainbow Cinemas will be reducing ticket prices to what they were back in 1998 when the theatre opened.

Over the last month, Hendricksen said he has spent a lot of time reflecting on his 15 years working at the Rainbow, as well as the years he came to the theatre as a kid.

“I remember days running from the ticket office, selling tickets and then scooting back to serve popcorn, ripping tickets, helping the kids clean and it just was never ending. People were flowing through those doors constantly,” he said.

The theatre is known for its retro vibe and for showcasing independent films and that is certainly the case in its final week as they showcase the film Brotherhood.

Based on the true story, the movie follows of a group of boys in 1926 as they attempt to survive a night on Balsam Lake in Ontario. It will be the final Canadian film shown at the theatre, something director Richard Bell is forever grateful for.

Red carpets are back at TIFF, but big questions loom about the future of cinema

“It’s sad because so much right now that we’re experiencing in global events and in Canada feels like end-of-an-era sort of stuff,” Bell said.

“I feel really badly for the cinema because Brotherhood is also an independent film and I know how hard it is to run something small and defiantly independent. So I feel very sad but also kind of honored,” Bell explained.

For both Hendricksen and Bell, the sad truth is that people always appreciate things more when they are ending than when they were a staple.

“It’s sort of human nature that we appreciate something as it disintegrates, as it’s no more,” Bell said. “We do truly kind of miss things more when they’re about to go or they’re gone.”

While the theatre may be closing Sunday, Hendricksen said there is one thing has made the journey a little bit easier.