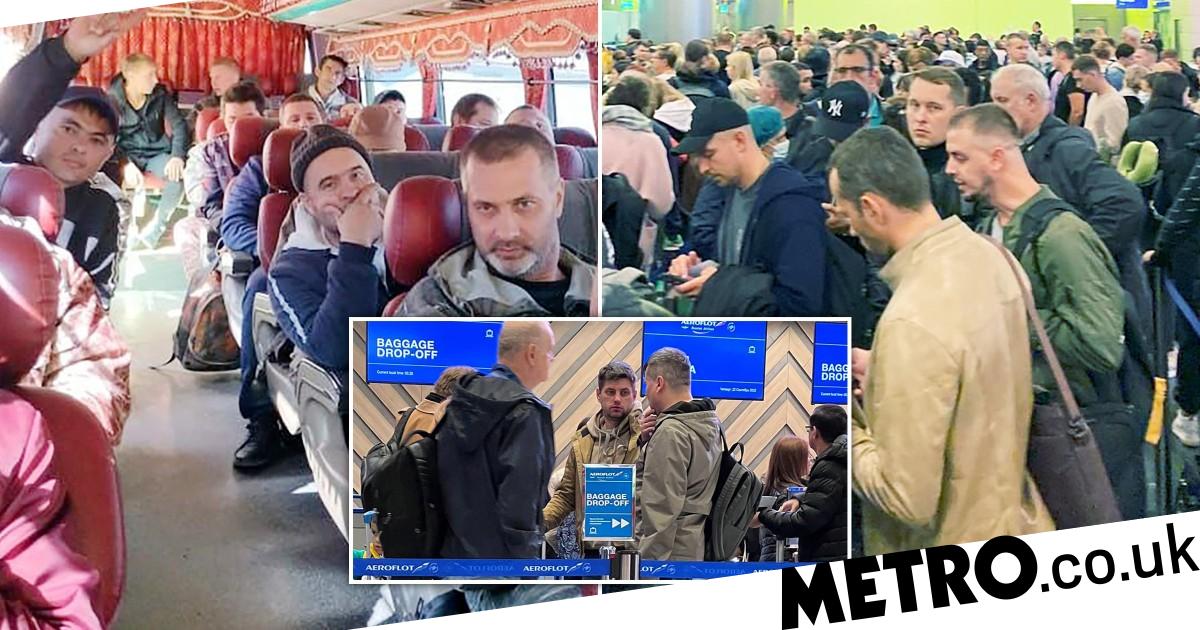 The first Russian reservists who will be forcibly sent to the frontline as part of Vladimir Putin’s partial mobilisation were given just four hours to pack their bags.

Tens of thousands of others have sought to flee the country, with five-hour long queues at the borders to Finland, Georgia, and Mongolia.

At airports, those lucky enough to purchase a one-way flight abroad before they sold out were filtered into sinister queues to make sure they were not eligible to fight.

If so, they were being blocked from departing even if they had tickets and visas for another country.

Women reservists have not been summoned to military training.

The partial mobilisation is the latest sign Putin’s invasion is not going according to plan after nearly seven months of fighting.

One man who was able to leave Russia said: ‘All men are now stopped at Sheremetyevo airport in Moscow, their documents are taken away.

‘They are all asked if they served in the military, and when they bought their tickets.

‘Next is either an interrogation, or they are left to go in 15 or 20 minutes after a thorough document check.’

The price of plane tickets skyrocketed after the announcement, with flights to Serbia selling out completely.

In an emotional video, men called up from a small town in Yakutsk were filmed tearfully saying goodbye to their families before being loaded onto a bus to taken off for military training.

Others in the far east have been filmed beginning their journey to Ukraine after being conscripted and sent for military training.

There have also been reports of those who do not qualify being summoned to war.

In Ussuriysk, a 62-year-old trauma doctor, who in theory does not qualify for mobilisation, was told he had four hours to pack his belongings by military officials posing as patients in the clinic where he works.

Others were awoken in the middle of the night, and those who did not open their door were handed their orders when they arrived for work this morning.

Traffic jams have also been seen as people attempt to flee the country by road.

A 75-vehicle backlog could be seen at Torfyanovka-Vaalimaa, while queues of 35 cars were seen in Brusnichny, and 60 in front of the Imatra checkpoint.

At the frontier with Kazakhstan, an escapee said: ‘We left Saratov at 6pm to Uralsk in Kazakhstan.

‘It was a bad road, and a giant jam at the border.

‘Nearly everyone I managed to speak said they were running away from mobilisation.’

In Dalnegorsk, in the eastern Primorsky region, mobilised reservists were videoed on a bus as an officer took a roll call, whilst in the regional capital Vladivostok, men were seen reporting to an enlistment office with their belongings.

There were reports of desperate women threatening to break their husbands’ bones so they were unfit to serve, prompting the authorities to threaten recruits with legal sanctions if they self-harm.

Men who have three or more children have been spared from conscription, leading some to frantically propose.

Anna, a Muscovite, said: ‘A friend, a single mother of five was proposed to today.

‘She laughed so hard when she told me about it, and said it looks like she will be super popular in the near future.

‘It seems men with three of more children will not be mobilised.’

There were reports of ‘brutal’ officers using batons to control crowds in Moscow.

Large protests have not been seen in Russia for five or six months after the Kremlin introduced new laws to silence dissent.

Furious Russians used social media to demand MPs should be the first to be mobilised, but according to MP Dmitry Vyatkin, he has the hardest job at his desk.

He said: ‘Sometimes it seems that writing a statement and going to the from is probably the easiest decision, but MPs must convey the importance and criticality of the current situation to everyone.’