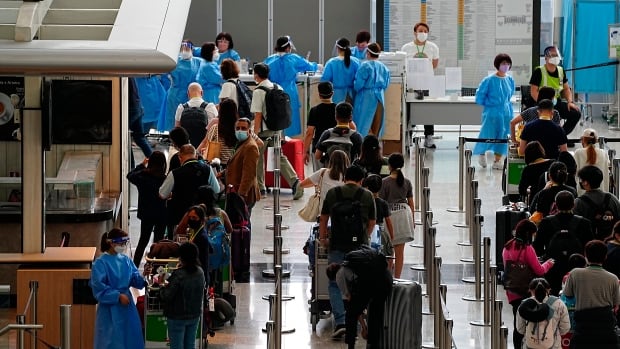 Hong Kong’s leader announced the city would no longer require incoming travellers to quarantine in designated hotels as it seeks to remain competitive and open up globally after nearly two years.

Incoming travellers will also no longer need a negative PCR test within 48 hours before boarding a plane to Hong Kong, the city’s chief executive, John Lee, said Friday at a news conference. Instead, they will need to present a negative COVID-19 result from a rapid antigen test conducted within 24 hours before the flight.

The measures will come into effect Monday.

“While we can’t control the trend of the epidemic, we must allow the maximum room to allow connectivity with the world so that we can have economic momentum and to reduce inconvenience to arriving travellers,” said Lee, who also said that authorities will not roll back the measures announced Friday.

He said that there must be a “balance between risks and economic growth.”

From Monday, travellers into Hong Kong will have to undergo three days of home monitoring. If they test negative for COVID-19 after three days, they will be allowed into venues such as restaurants and bars. They must also undergo several mandatory PCR tests, including one on arrival, as well as on their second, fourth and sixth days in Hong Kong, coupled with daily antigen rapid tests every day for their first week.

China’s Global Times reported that hours after the announcement, Canada was among the top locations for searches of international flights to Hong Kong on the online travel agency platform Qunar.

Cathay Pacific’s website “experiencing high traffic” after the announcement was made. Visitors to the site had to wait in a virtual queue to enter.

The city’s daily COVID-19 infections have fallen to below 6,000 cases a day, from over 10,000 daily cases early this month. A large majority are local infections.

For nearly two years, Hong Kong required overseas arrivals in the city to serve a period of mandatory quarantine in designated hotels. At one point, the city had among the world’s longest quarantine periods, at 21 days of mandatory isolation.

Neighbouring Taiwan is expected to do the same next month. This leaves mainland China as one of the only places in the world that will still require travellers to quarantine on arrival.

Hong Kong has for most of the pandemic aligned with China’s “zero-COVID” strategy.

Over the past 2½ years, Hong Kong authorities have imposed strict social distancing measures and locked down residential buildings with confirmed COVID-19 infections to mass-test residents.

An outbreak there earlier this year forced Air Canada to cancel flights to Hong Kong for a period of several weeks. Earlier in the pandemic, some Canadian flight staff were getting ensnared in the strict quarantines after testing positive for COVID-19 despite departing after testing negative at home.

As the rest of the world reopened borders, businesses urged Hong Kong authorities to come up with an exit strategy to the pandemic in order to remain competitive amid a brain drain as tens of thousands of residents left the city.

Several companies also moved their offices to countries like Singapore as they sought relief from the city’s restrictions.

Singapore had eased travel curbs and relaxed coronavirus restrictions months before Hong Kong, sparking concerns that Hong Kong may lose out in competitiveness as an international financial centre and regional business hub.

The easing of measures comes as Hong Kong prepares to hold several high-profile events, including the Rugby Sevens tournament in November and an international banking summit.