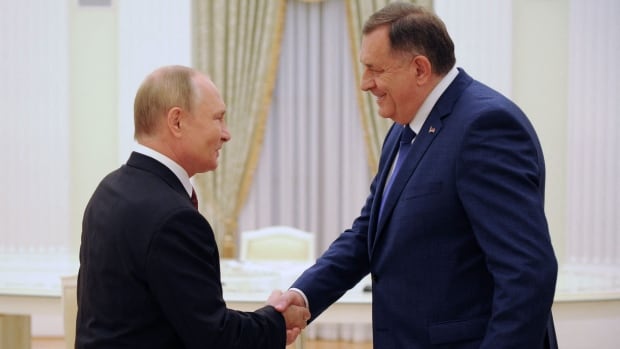 The day before Russian President Vladimir Putin ordered the mobilization of reserve troops in an escalation of the war in Ukraine, he took time from his day for an unusual visit.

Separatist leader Milorad Dodik, the Serb member of Bosnia and Herzegovina’s three-person presidency, became one of few European politicians to break Putin’s isolation by visiting the Kremlin on Tuesday.

The trip was all the more unusual as Dodik is in the midst of an election campaign for leadership of Bosnia’s ethnic Serbian enclave, Republika Srpska, which he has repeatedly threatened to take out of its union with Bosnia’s other ethnic groups.

Smiling and shaking hands for the state press, Putin wished Dodik success in the campaign. “I hope that the results will strengthen the position of the patriotic forces in the country,” an official transcript of the conversation reads.

It’s revealing that Putin took time in the midst of a historic mobilization to boost the campaign of a politician elected in 2018 with fewer than 400,000 votes.

Dodik and his power base of Serb nationalists are at the centre of a long-running power game that Russia and the West have been playing in the Western Balkans for decades.

Now, with ethnic tensions rising, some analysts are worried Russia will seek to use its influence with figures like Dodik to disrupt the delicate peace that has held in the region since the devastating Yugoslav Wars of the 1990s.

“The situation has changed dramatically” since Russia invaded Ukraine in February, said Lirim Bllaca, a former captain in the Kosovo armed forces and a security consultant for the Kosovo government. “There’s been more attempts by Russia to instigate conflict in the Balkans.”

“Having closer ties and influence, that’s always been Putin’s goal,” said Andi Hoxhaj, a lecturer in international law at University College London and an expert on the Western Balkans, which encompasses Bosnia and Herzegovina, Albania, Kosovo, Serbia, Montenegro and North Macedonia.

But “in parts where he cannot achieve it,” Hoxhaj said, “[Putin will] destabilize it.”

Russia’s influence in the Balkans is nothing new. Since Serbia first fought for independence from the Ottoman Empire in the 19th century with Russia’s support, it has been a key ally of ethnic Serbs in the region.

But with NATO’s bombing of Yugoslavia in the late 1990s and its recognition of Kosovo’s independence from Serbia in 2008, many Serb nationalists adopted a hostile attitude toward Western powers and instead emphasized their historic connection to Russia.

“Russia’s allure is that … [it is] perceived as someone who stands up to the West,” said Vuk Vuksanovic, a Balkans analyst with the Belgrade Centre for Security Policy and an associate of LSE IDEAS, a foreign policy think-tank at the London School of Economics.

Throughout the 2010s, it delivered on its reputation, exerting its influence on the United Nations Security Council to stymie Kosovo’s bid for international recognition and advocating for Serb autonomy in Bosnia.

Experts say Russia’s influence campaign in the Western Balkans accelerated after its 2014 invasion and subsequent annexation of Crimea from Ukraine, when it began to act aggressively to check the advance of the North Atlantic Treaty Organization across eastern Europe.

In 2017, Montenegro’s government even accused Russia of orchestrating a plot to assassinate a former prime minister and stage a coup to prevent the country from joining NATO. It became a member in June of that year.

One year later, Russian diplomats were implicated in efforts to bribe Orthodox priests in Greece to speak against an agreement with North Macedonia that would pave the way for the latter’s membership in NATO.

In Bosnia, experts say Russia has increasingly worked to block reforms that would bring it closer to NATO and European Union membership. At the same time, it has voiced strong support for Dodik’s Serb nationalists, who have heightened tensions by stalling national-level institutions and threatening to secede.

“With Russian help, the [Republika Srpska] has de facto become much more independent,” said Paul Stronski, a senior fellow at the Carnegie Endowment for International Peace. “Russia … really treats [Dodik] as if he is an independent head of state.”

Meanwhile, observers say Russia has poured money into training and arming the Republika Srpska’s police force and nurtured connections between Serbian and Russian ultra-nationalists. It has threatened to veto an extension of the UN-mandated peacekeeping mission to Bosnia, EUFOR, and locally broadcast a documentary featuring Serb nationalist leaders calling for the “denazification” of the country.

“It actively works to complicate the reconciliation process between Bosnians, Croats and Serbs in the country,” said Stronski. “And … keeps Bosnia in a limbo, where there is constant potential for tension.”

The goal of this disruption, analysts say, is to keep the West on alert for renewed conflict in the Balkans and prevent Western powers from exerting greater influence.

“Russia has long resisted the United States and Europe’s engagement with countries in the former Soviet space,” Stronski said. “Russia, by engaging in the Balkans, is sort of doing the opposite — it is trying to engage in what it considers Europe’s backyard.”

But increasingly, said Balkans analyst Vuk Vuksanovic, “local power holders don’t want to be sacrificed for the sake of Russia.”

In Serbia, a pro-Russian policy is still a prerequisite for nationalist politicians, like its president, Aleksandar Vucic. Just a month before his re-election in April, his supporters took to the streets in the thousands to endorse Russia’s war in Ukraine. T-shirts bearing Putin’s face were reportedly a bestseller.

Analysts say a preferential pricing agreement with the Russian company that controls Serbia’s energy supply was essential to Vucic’s victory. After Russia’s invasion of Ukraine, he became one of the few European leaders to oppose sanctions.

But Vucic has often tried to balance his support for Russia with entreaties to Western powers. He used his second inaugural address to recommit his country to pursuing EU membership. In the past, pro-government tabloids have blamed Russian disinformation for violent anti-lockdown protests and for undermining agreements with Kosovo that would bring more stability to relations.

“Vucic is playing his own game,” Vuksanovic said, “balancing and playing Russia and the West against each other.”

For Predrag Rajic, a Serbian political analyst who also acts as an adviser to Serbia’s minister of foreign affairs, this is just common sense, since Serbia is deeply dependent on the EU economically — with its trade dominated by Germany, Italy and other EU states.

“Our connections with the West are very deep,” he said. “You will not find anyone in Serbia who saves his money in rubles. And when Serbs are buying cars or flats, they are telling you the price in Euros.”

Yet the EU has been slow to capitalize on its own influence. Membership talks have been stalled in many Balkan countries for years.

When the EU granted Ukraine candidate status this summer in response to Russia’s invasion, while imposing more conditions on Bosnia, many in the region saw it as unjust, according to Rajic.

“If you ask me, that decision from Brussels has created much more instability in the region than Russian influence ever has,” he said.

Lirim Bllaca, the Kosovar army captain, said that as the influence of pro-EU politicians wanes, a new wave of “right-wing sentiment” is filling the vacuum.

“When the war in Ukraine started, you could feel it,” he said, particularly in Kosovo’s Serb communities, where many are veterans of past wars. “I think we all had flashbacks of the last conflict.”

WATCH | What does Russia’s massive troop mobilization mean for war in Ukraine?

Putin’s massive troop mobilization: What does that mean for war in Ukraine?

Vladimir Putin is pressing another 300,000 Russians citizens to fight in Ukraine, who will likely be stationed in Eastern Ukraine where Russia has lost tens of thousands of troops. But very few of the new recruits actively trained for war.

But Bllaca and other analysts are in agreement that for now, open conflict remains unlikely.

With its resources tied up in Ukraine, “Russia’s capability for mischief is, at this moment in time, limited,” Vuksanovic said.

While there “is no doubt that Russia will try to score a few political points in any political chaos,” he said, ethnic leaders like Dodik have so far been able to maintain their grip on power without resorting to violence.

“There are certainly more problems in the Balkans than 10 years ago,” Vuksanovic said. “But it is still better to be in Belgrade or Sarajevo rather than in Kharkiv or Odesa.”