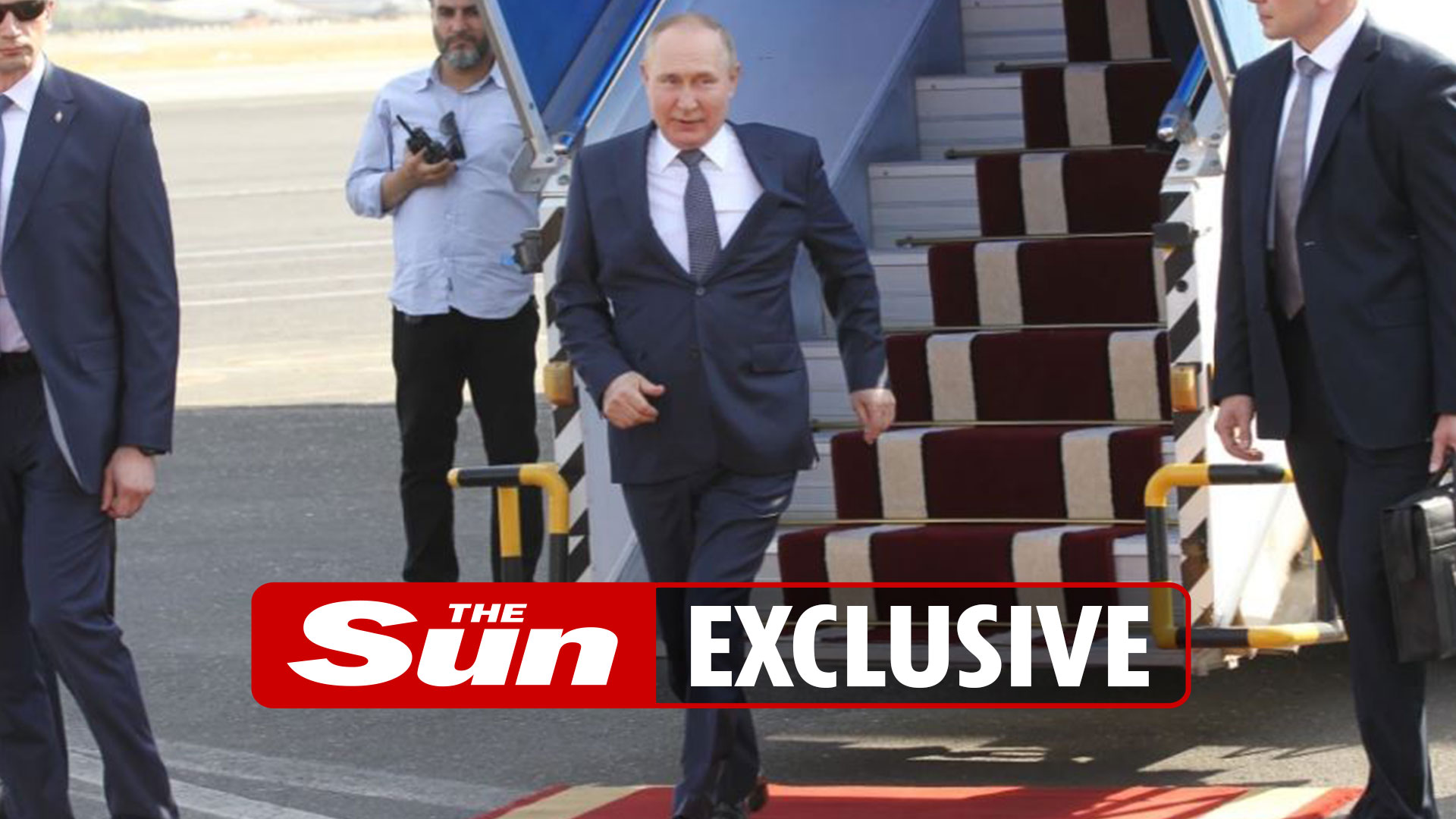 LIMPING Vladimir Putin appeared to lose control as he stumbled on the last steps of his jet after landing in Iran, a body language expert said.

Putin, 69, was seen hobbling along the red carpet with his arm hanging limp by his side as he arrived in Tehran to meet fellow global terror master Ayatollah Ali Khamenei on Tuesday.

With his right arm limp by his side, the leader was seen looking unsteady on his feet as he walked down a long red carpet rolled out for him at the capital’s airport.

He briefly waved to the gathered crowds before being whisked into his presidential convoy to the city.

But Professor Erik Bucy, a body language expert from Texas Tech University, described Putin’s arrival as “one of the shortest deplanings of an arriving head of state I’ve ever seen”.

He said the dictator seemed to lose control as he almost “ran” off the last few steps of the airstairs. 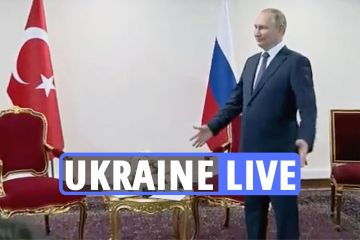 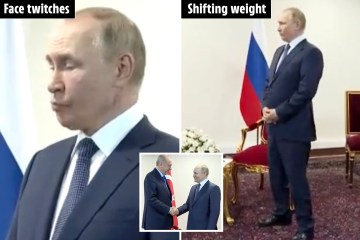 The arrangement of the airstairs was also carefully set up to hide any help Putin might have had getting down the steps, Mr Bucy said.

Mr Bucy told The Sun Online: “He appears to limp when he walks, indicating an injury or just general weakness in his legs.

“The problem appears to be with his right leg, causing him to limp.

“Second, his right arm seems immobile and remains down and dangling at his side. Something has definitely affected the functioning of his arm and leg.

“While limping on its own could be caused by any number of factors, the combination of a compromised leg and arm is a telling sign of physical compromise.”

Mr Bucy also pointed out how Putin only emerged on the stairs of the jet for the last few steps, which was a “heavily choreographed” decision.

“The arrangement of the airstairs and waiting limousine is heavily choreographed, as well,” he said.

“The stairs are covered until the last few steps, concealing any struggle or assistance Putin may have had coming down the stairs.

“Two awaiting dignitaries are there to greet him just a few steps later so he does not have to walk any distance on his own.

“After a brief rest and greeting he then makes his way another few feet to the open car door and slips back into visual obscurity.

“It’s one of the shortest deplanings of an arriving head of state I’ve ever seen, both in terms of the number of steps taken and length of Putin’s outdoor appearance.”

Putin and hardline Islamist tyrant Khamenei were set to discuss war plans and weapon exchanges in their coordinated campaign against the West.

It was Putin’s first trip outside the boundaries of the former Soviet Union since the invasion of Ukraine in February.

The Russian president has become a shadow of his former strongman self in recent months, amid claims he is suffering from Parkinson’s or terminal cancer.

And he struggled to stand and twitched as he was forced to wait an excruciating 48 seconds to greet the Turkish President.

The frail leader appeared visibly uncomfortable as Erdogan kept him waiting ahead of their sit down in Tehran.

After slowly striding into the room, the tyrant seemed to become unsteady on his feet within just a matter of seconds.

His continuous fidgeting and twitching face further highlighted his instability, sparking rumours the warmonger’s health has took a turn for the worse.

Putin’s jaded appearance in Iran comes after he struggled to keep his eyes open during a crunch meeting with his defence minister earlier this month.

The Russian leader, rumoured to be undergoing debilitating cancer treatment, was seen slumped over and bleary-eyed in the footage.

Rumours of Putin’s ill health have continued to swirl after the leader was spotted looking unwell at public gatherings and was pictured with a thyroid cancer doctor.

It’s even been claimed that Putin could already be using tricks such as pre-recorded appearances and body doubles to stage manage his health.