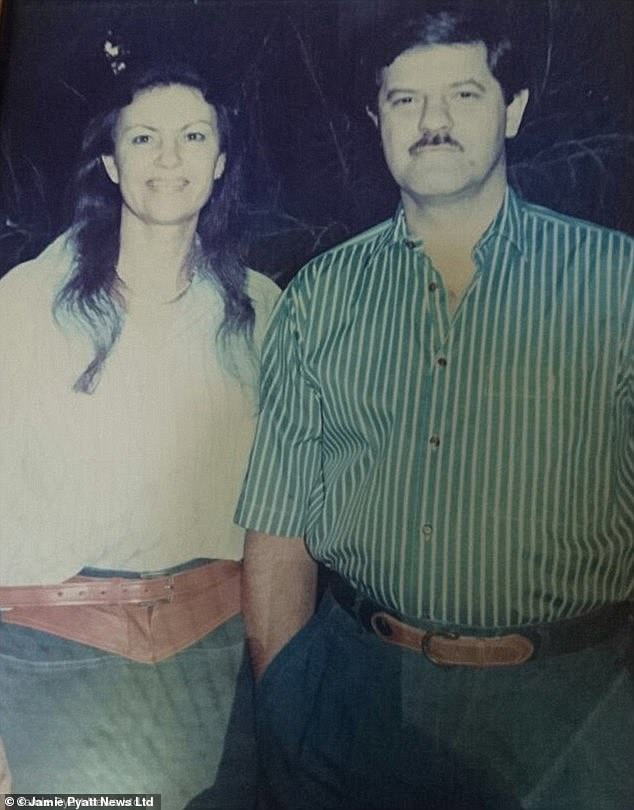 Two men have been sentenced to 37 years in prison for the 2017 murder of a British woman in South Africa, who died after she and her husband were tortured.

Masked raiders tied up and brutally attacked Susan Howarth, 64, and Robert Lynn, 66, on their farm in Dullstroom, in South Africa’s eastern Mpumalanga province.

The couple were shot, stabbed and tortured with a blowtorch by three men who broke into their home. Ms Howarth – originally from Southsea, Hampshire – died during the attack in February 2017 after suffering horrific injuries.

Her husband miraculously survived, with his account being used in court. In his victim impact statement, he told the court: ‘I am in my own prison of fear and total sadness,’ five years on from the ordeal.

The assailants were from Bergendal farm, near Belfast in South Africa. According to the National Prosecuting Authority (NPA) in Mpumalanga, they were both sentenced on June 30 to 37 years in prison for the attack.

‘The three broke into farmhouse of Marchlands in Dullstroom, in the district of Belfast and found the couple sleeping,’ NPA spokeswoman Monica Nyuswa said.

‘They attacked them with a blowtorch, and shot Susan in the head who later succumbed to injuries.’ 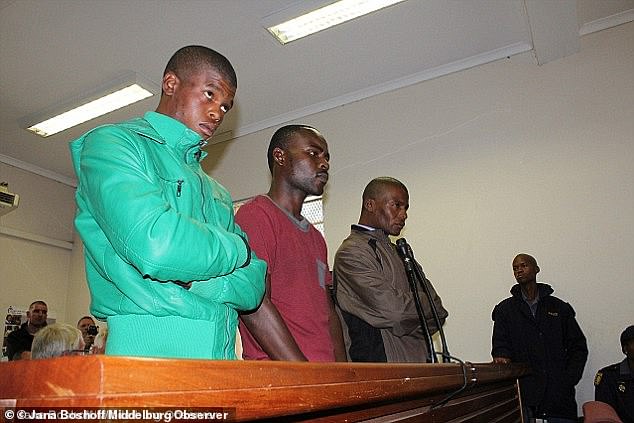 Brothers Meshack Nkosinathi Yika (centre), 28, and Themba William Yika (left), 38, were originally charged along-side a third man – Lucas Makau (right) – who died during the trial. The brothers were sentenced to 37 years in prison on June 30 over the attack and killing

Nyuswa described how the home invaders shot Mr Lynn once in the neck and dragged the couple to the living room where the demanded money from them.

‘They continued to assault the complainant until he opened the safe and took an amount of R320, two cellphones and a camera,’ the spokeswoman said.

‘They further burnt him with blowtorch several times on his body. He gave them his bank card and the PIN number with the hope that they would leave him.

‘Instead, they covered his face with a plastic bag and forced both the deceased and the surviving victim in their van and drove away.

‘They then threw them out along the road. The matter was reported to the police and the investigations led to their arrest,’ Nyuswa said.

During the trial, prosecutor Adv Eric Sihlangu shared Mr Lynn’s account of what happened during the terrifying 2am home invasion, which saw the three men enter in through a window and tie the couple up.

It revealed that Mr Lynn was stabbed once in the shoulder, taken from his home and forced to kneel down in scrubland. He was then shot another time in the neck.

But incredibly retired Mr Lynn survived the brutal attack and managed to free himself and find his terribly injured wife nearby after being left for dead.

Police said at the time she was unrecognisable from her injuries and was in a coma. Her husband raised the alarm she was rushed to hospital but died 48 hours later. 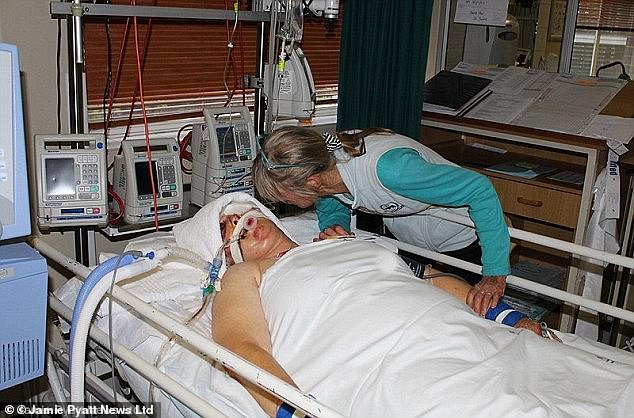 At the time, close friend Claire Taylor invited local paper the Middleburg Observer into the hospital to photograph Sue in bed to show the full horror of what local farmers are going through. She said: ‘She would have wanted the world to see what happened to her’ 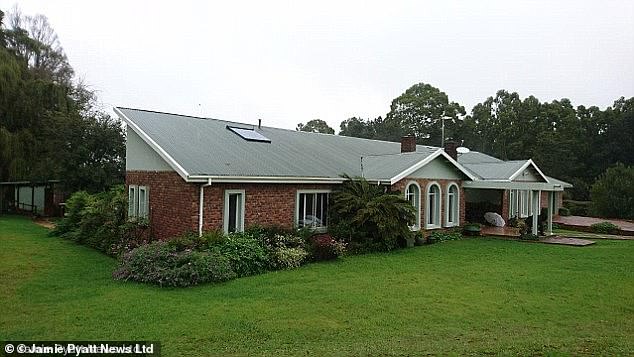 During the trial, prosecutor Adv Eric Sihlangu shared Mr Lynn’s account of what happened during the terrifying 2am home invasion, which saw the three men enter in through a window and tie the couple up. Pictured: The couple’s bungalow

It was reported in 2017 that she had multiple fractures to her her skull, gunshot wounds and horrific burns from the blowtorch to her breasts.

Judge Lineo Liphoto at Mpumalanga High Court found the brothers guilty of six offences: murder, attempted murder, kidnapping, housebreaking, robbery and possession of an unlicensed firearm – for a total of more than 50 years.

However, the court ordered that some of their sentences would run concurrently, meaning they will each serve a maximum of 37 years in prison.

In a victim impact statement read out in court, Mr Lynn said before the sentencing that he ‘will never have peace again’ after the attack.

‘Due to the trauma of the incident, I had to pack up my whole life and leave the country because I no longer felt safe,’ his letter said, according to Maroela Media.

‘I will never have peace again. Our friends and family are just as traumatized as I am. I am in my own prison of fear and absolute sadness because of the acts of violence against me and Sue.’ 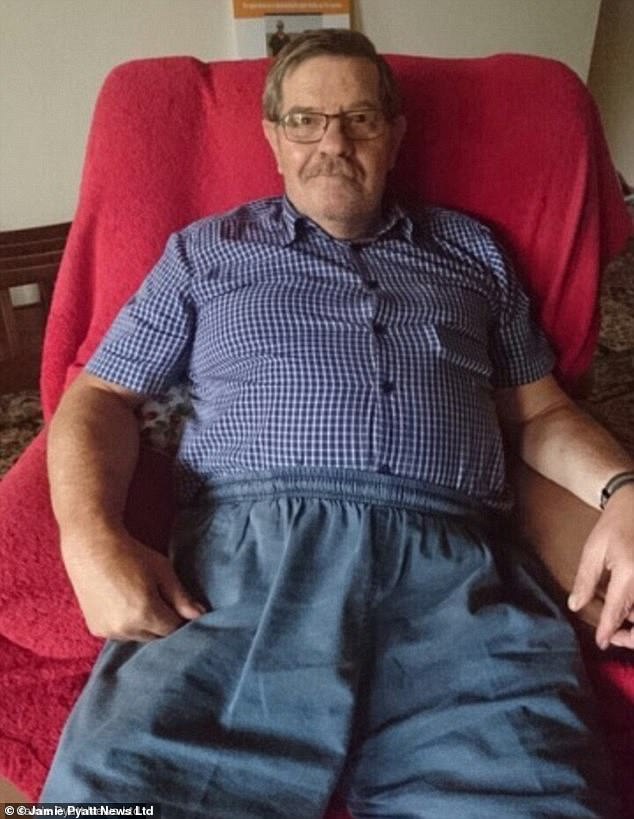 In a victim impact statement read out in court, Mr Lynn (pictured) said before the sentencing that he ‘will never have peace again’ after the attack 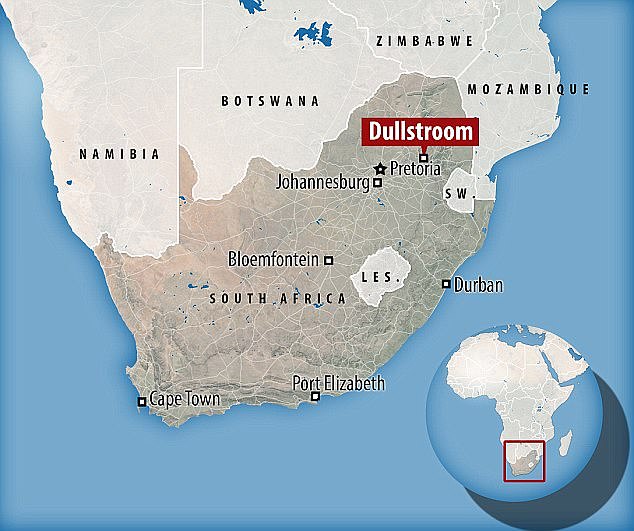 He said ahead of the sentencing that he hoped those responsible will be sentenced to live in prison without the possibility of parole.

‘They have proven that they are professional criminals. I myself will be in prison for the rest on my life without a chance of parole.’

Ms Howarth moved to Dullstroom in 1996 and started the Dullstroom Stables before the farm Marchlands – where she was attacked – became her home.

After her funeral in 2017, her ashes were set be flown to Southsea in England where she would be buried with her parents. She was an only child.

The attack sparked anger in South Africa, which has a high rate of violent crime, with attacks on farmers in relatively isolated areas fuelling anger in the community.