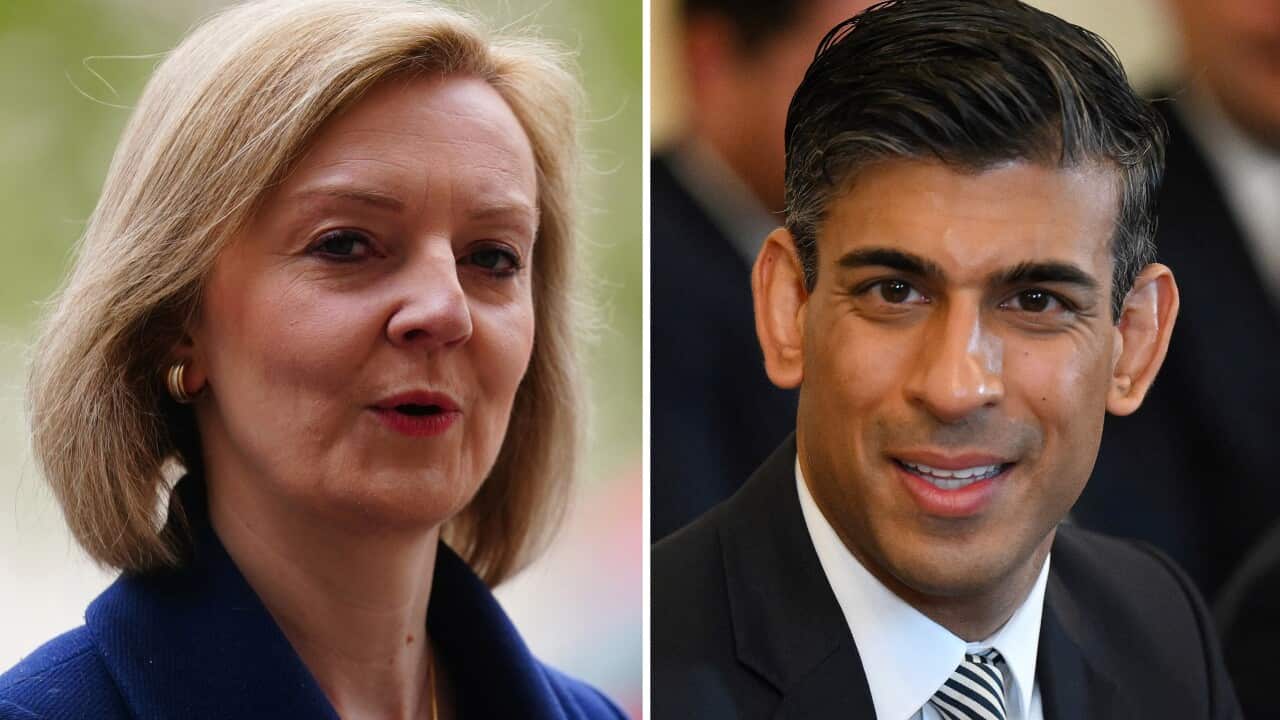 The crucial race for second place was narrowly won by Foreign Secretary Truss, on 113 votes, against 105 for trade minister Penny Mordaunt.

Mr Sunak and Ms Truss now take their case to Conservative party members, who will decide the new leader and prime minister after a dozen nationwide hustings and several televised debates over the next six weeks.
The result will be announced on 5 September. But the UK is already guaranteed to get either its first prime minister of colour or its third woman leader.

The economy will be a key battleground in the coming weeks. But they also have differing views on other policy areas.

Former finance minister Mr Sunak is vowing to stick with a host of recent tax rises in a bid to balance the books following record government borrowing during the COVID-19 pandemic.
He has said curbing inflation, which is at a 40-year high, is his priority and criticised Ms Truss’s “fairytale” plans on tax.
Foreign Secretary Truss has accused Mr Sunak of pulling the UK to the brink of recession, and vowed to “start cutting taxes from day one” including corporation tax paid by businesses.

She also wants to review the Bank of England’s mandate to set interest rates.

As chancellor of the exchequer, Mr Sunak in May implemented a £15 billion (A$26 billion) package of support to help Britons through the worst cost-of-living crisis in decades.
However, his leadership rivals criticised it as insufficient, with energy prices set to surge anew in October.

Ms Truss has vowed to use economic growth fuelled by her promised tax cuts as the primary way to tackle the crisis.

Ms Truss backed remaining in the European Union in Britain’s 2016 referendum, before becoming a zealous convert to the Brexit cause. Since December, she has led negotiations with Brussels over subsequent frictions.

She is pushing new legislation that would unilaterally rewrite the UK’s post-Brexit commitments to the EU over Northern Ireland, which opponents say breaches international law.

Mr Sunak, a rising Tory star in 2016, came out early for Brexit, to the despair of then leader David Cameron.

He has said he backs the controversial proposals on the “Northern Ireland Protocol” and, as chancellor, promoted “freeports” around Britain as one way of profiting from Brexit.

Under pressure to curb waves of migrants crossing the Channel from France, the Conservative government has been pushing a plan to send asylum seekers to Rwanda for processing and resettlement.
The policy, which has been stalled by legal action, is backed by both candidates. Ms Truss has called it “completely moral”.

But Mr Sunak has faced anonymous briefings to newspapers claiming he opposed it in cabinet over its £120 million (A$208 million) costs.

Mr Sunak has declined to set “arbitrary targets” on military spending following the war in Ukraine.
But he views NATO’s target — for member states to spend 2.0 per cent of GDP on defence — as a “floor and not a ceiling”.

He wants Britain’s defence budget to rise to 2.5 per cent of GDP “over time”. Ms Truss has been more forthright, this week committing to spending 3.0 per cent by 2030.

Mr Sunak has vowed to stick with the UK’s legally binding targets to reduce carbon emissions to net zero by 2050.
He would maintain “green levies” on energy bills earmarked to help the renewable sector grow.

Ms Truss has vowed to scrap the levies, but says she is committed to the 2050 target.