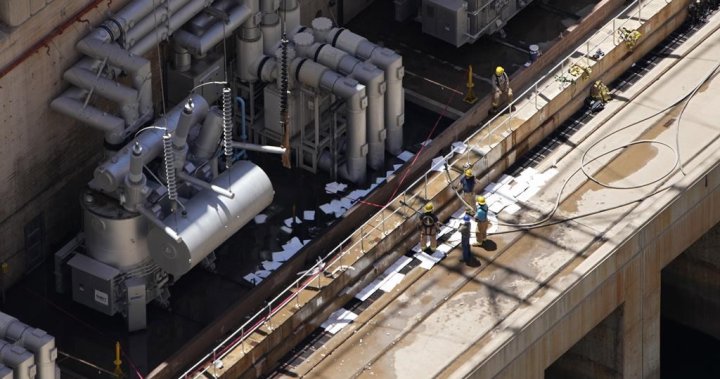 Equipment failure caused a transformer at the Hoover Dam to explode, causing a fire that lasted about a half-hour and sending plumes of black smoke swirling through the air.

Crews quickly extinguished the fire Tuesday morning. Doug Hendrix, public affairs specialist for the U.S. Bureau of Reclamation, emphasized that the fire was isolated to the single area, which limited damage to the facility, and that investigators would soon know what caused it.

“We’ve got engineers and some of our senior leadership down there taking a look now, also with some inspectors to see exactly what happened,” Hendrix told KTNV in Las Vegas. Hendrix did not respond Wednesday to emails from The Associated Press.

What is Hoover Dam?

Hoover Dam, about 40 kilometers southeast of Las Vegas on the Nevada-Arizona border, is one of the tallest concrete dams in the U.S. at 221 meters. It supplies hydroelectric power for about 350,000 homes in Arizona, California and Nevada.

To create hydropower, a renewable energy source, water from the Colorado River flows into the dam, then into a pipe, which spins into a generator that ultimately creates electricity, before it goes into the transformer.

An explosion happened just after 10 a.m. Tuesday on one of the dam’s 17 transformers that generate electricity. The explosion caused a thick cloud of black smoke and flames that was caught on camera by visitors but was extinguished by fire crews within a half hour. Officials said equipment within the transformer failed, causing the fire, but they have not yet said what caused the equipment to fail. There were no injuries.

Where does the investigation stand?

An investigation into the specifics of what caused the fire is ongoing with no specific timeline for its findings, said Michelle Helms, public affairs officer for the Bureau of Reclamation, in an emailed statement to the AP.

“These investigations take some time,” she said.

0:47
Police respond after man with weapons barricades himself in truck near Hoover Dam

Police respond after man with weapons barricades himself in truck near Hoover Dam – Jun 15, 2018

Is power supply reduced at the dam?

Officials have not said how much power generation was lost.

Hendrix told KTNV the power grid is not affected because the fire was contained to the site of one transformer of 17 total _ and remained isolated until fire crews extinguished it.

“All of our protection equipment kicked right in, so it was isolated to that (transformer),” Hendrix told the TV station. “So we were very fortunate.”

What is a transformer?

All power plants have transformers, which are mainly used to increase the voltage of electricity generated to send over transmission lines, said Jordan Kern, an assistant professor of natural resources at North Carolina State University.

Hoover Dam has 17 transformers— nine on its Nevada side and eight on its Arizona side. The fire was extinguished on the fifth Arizona transformer.

How rare is a power plant fire?

A fire at a power plant is rare, though there’s always a risk, Kern said.

“I think most commonly, it’s other electrical equipment,” that can cause a fire at a power facility, he said. “It’s not transformers themselves that are causing the fires.”

“But you can imagine there’s just an enormous amount of electrical cable in power plants. And if there are any malfunctioning equipment that ignites a fire, I think that can then spread.”