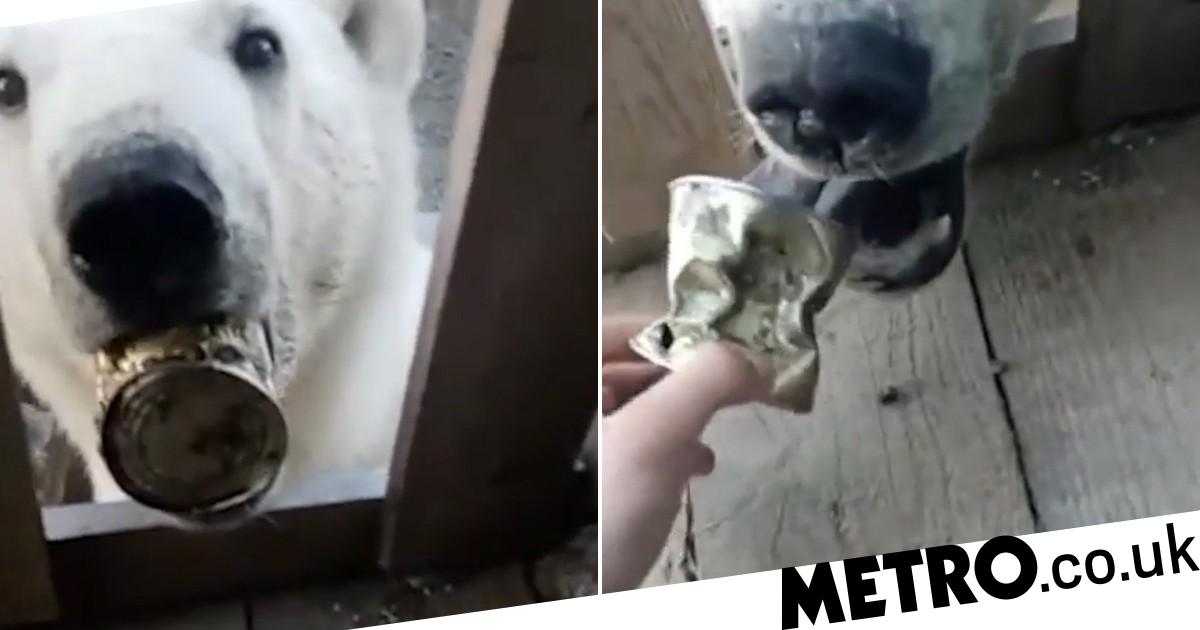 Heartbreaking video has shown an exhausted polar bear ‘close to death’ pleading with humans for help.

The footage was taken in the Arctic outpost of Dikson, in the Krasnoyarsk region of Russia.

It is rare for polar bears to venture close to humans, so residents were initially wary when the wild animal padded past homes.

But it soon emerged the creature was in huge distress.

It had sought help from the humans after failing to remove a tin can from within its mouth.

The tin seemed to be entirely wedged over the polar bear’s tongue, with a sharp edge causing further pain.

Residents tried in vain to help the bear before they were forced to give up.

But they raised the alarm, and a brave team of vets are now battling difficult weather conditions to try reach the village.

The bear cannot eat or drink due to the tin, which means its a race against time to save it.

Svetlana Akulova, general director of Moscow Zoo, said: ‘The plan is to sedate the bear, set it free and move it further away from the settlement.

‘We’ve prepared 50kg of fish for the bear to help its recovery.’

Svetlana Radionova, head of the federal service for supervision of natural resources, added: ‘A young polar bear with a condensed milk tin can stuck in its mouth came to seek help from people in the village of Dikson, in the north of Krasnoyarsk region.

‘We have already found specialists, a team of vets from Moscow, who will fly there to help the emaciated predator.

‘We’ll do everything possible to rescue the bear.’

Bad weather initially stopped the vets getting to Dikson after they flew to Norilsk.

The bear’s health is clearly deteriorating fast, according to experts, with its hind legs shaking from what they think is thirst and hunger.

‘The bear got so exhausted with the can it was coming to us and sticking its tongue out,’ said a resident.

‘But it was impossible to help without traumatising the bear, so people gave up.’

The bear probably found the tin can at a rubbish dump while scavenging for food.