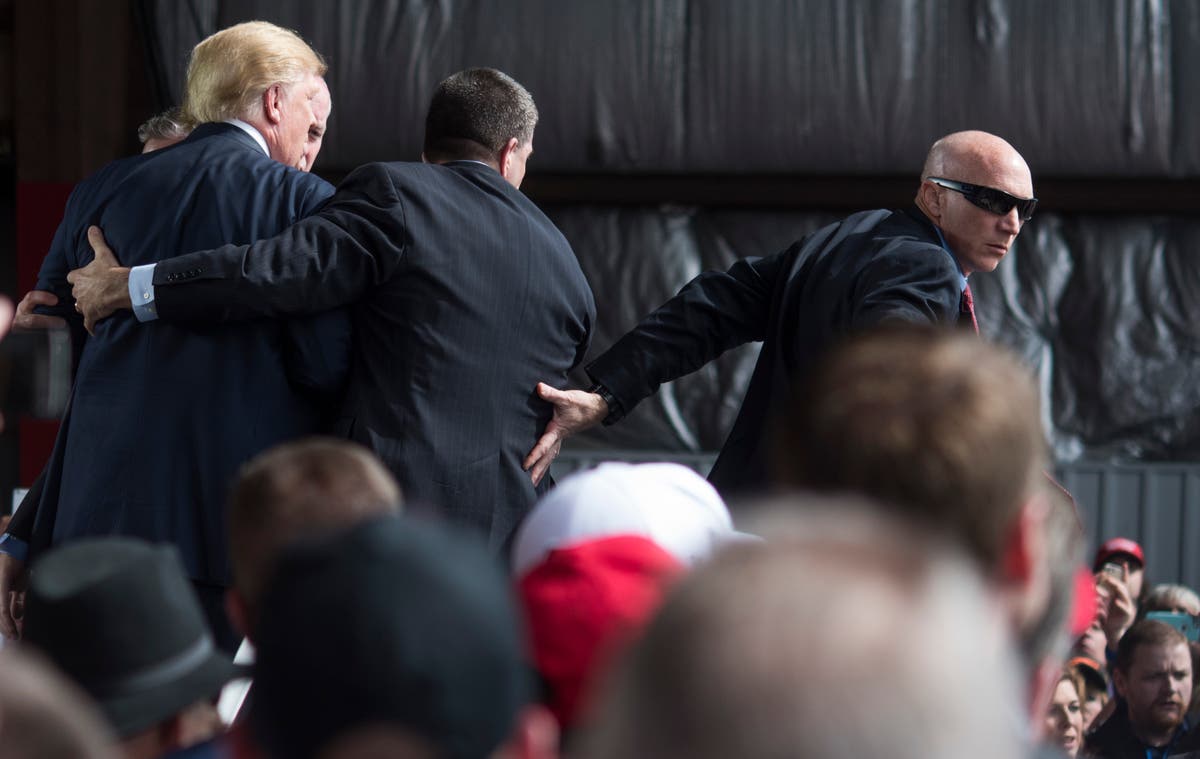 It was perhaps the most jaw-dropping testimony on a day when many jaws dropped.

President Donald Trump was so angry when he was told he could not go to to the US Capitol on January 6 2021 that he tried to grab the steering wheel of his SUV and lunged at the throat of one of Secret Service agents protecting him.

“I’m the f***ing president. Take me up to the Capitol now,” he reportedly said.

Cassidy Hutchinson, a former senior assistant to Trump’s chief of staff Mark Meadows, had not witnessed the incident first hand, she testified before the Jan 6 committee, but had been told it by Tony Ornato, then the White House deputy chief of staff, and himself a former officer with the US Secret Service (USSS).

He, in turn, had been told of the events by Robert Engel, the Secret Service agent in charge and one of those in Trump’s car.

The day after Hutchinson’s appearance, “sources close to the agency” started pushing back, telling ABC News and NBC News that Engel was prepared to testify that Trump never grabbed at the wheel.

As part of the broader inquiry into the events of January 6, the USSS was asked to provide documents and data to the committee.

The agency then revealed it had completely deleted all but one text from the days of January 5 and January 6, something it claimed was part of a “pre-planned, three-month system migration”, in which some data was lost.

The controversy has placed fresh scrutiny on the nation’s oldest federal law enforcement agency, founded in 1865 by Abraham Lincoln in the final days of the US Civil War.

Initially, the agency’s primary job was to combat the economic threat of counterfeit currency and the agency was part of Department of Treasury.

Now there are calls for a broader investigation into the actions of the agency, and even questions about whether some agents felt more of a loyalty to Trump, than to the oaths they swore.

Already, the National Archives, the senior record-keeping body in the country, has requested the agency, which since 2003 has been part of the Department of Homeland Security (DHS), provide a report within 30 days as to how the texts went missing.

The DHS’s own watchdog, Joseph Cuffari, head of the Department of Homeland Security’s Office of Inspector General, has claimed the texts were deleted only after his office requested them, and were part of a pattern of “resistance”.

The fallout has led to demands for greater accountability at the agency, which employs approximately 3,200 special agents. For three years it has been headed by Director James Murray, but this month Biden announced the agent was stepping down.

“There has to be a massive inspector general investigation and heads need to roll,” Andrew Weissmann, a former top official in the FBI, told MSNBC.

“Even if you assume that this was not, sort of, intentionally trying to keep documents from this committee, the sheer incompetence of it.”

The presidential historian Michael Beschloss suggested that any deletion of text messages by agents could be illegal.

“Aside from the vanished Secret Service records, what other crucial evidence potentially revealing Presidential and Executive Branch misbehaviour during period around January 6, 2021, has somehow “disappeared?” And who is to blame for the ’disappearance?’,” he wrote on Twitter.

Beschloss, whose books include Kennedy and Roosevelt: The Uneasy Alliance, said it was “essential to discover whether plotting for January 6, 2021, attack and insurrection included deliberate plots against lives of US elected officials.”

He said the deletion of records could be illegal and that the circumstances called for a “prompt investigation”.

He added: “With crucial evidence now reported to have been destroyed, the potential physical danger to President-elect Biden and Vice President-elect Harris from actions (or lapses) of US Secret Service on January 6 (and the period around that date) must now be investigated immediately.”

While the agency has long had something of a reputation for seeing itself in a class of its own, with a history of scandals, the most recent controversy has led to questions being asked about whether some agents felt a personal loyalty to Trump, someone who started his presidency by suggesting he would make use of privately-contracted security officers.

After Joe Biden defeated Trump in November 2020, it emerged that the president-elect was being assigned a new protective detail, containing some officers who already knew him, and replacing some on Trump’s team. The move was taken after it was feared some agents might have personal political loyalty to Trump.

Also adding to the questions, was evidence presented during a recent hearing of the Jan 6 committee in which it emerged vice president Mike Pence, who Trump had demanded stop the certification of Biden’s victory and who some protesters chanted they wanted to “hang” declined to leave the Capitol that day after it was stormed.

The committee was told by Pence aide Greg Jacob, that the then-vice president declined to get into his Secret Service vehicle, telling Tim Giebels, his lead Secret Service agent: “Tim, I know you, I trust you, but you’re not the one behind the wheel.”

After Hutchinson’s appearance, investigative reporter Carol Leonnig of the Washington Post, and author of Zero Fail: The Rise and Fall of the Secret Service, told MSNBC that both Ornato and Engel were both very close to the president.

She said a very large contingent of Trump’s detail “were personally cheering for Biden to fail, and some of them even took to their personal media accounts to cheer on the insurrection and the individuals riding up to the capital as patriots”.

Asked about Pence’s refusal to get in his car, she said he feared he would be “whisked off” away from the Capitol.

“Vice president Pence…and other aides, were also incredibly suspicious of the sort of “the palace guards” so to speak, and their alignment with Donald Trump and whether or not they were the ones pulling the strings if Vice President Pence climbed into that car,” she said.

“And Pence was absolutely determined, I trust you, Tim is what he said to his secret service detail leader, but you’re not the one driving the car and I’m staying here, and finishing the job.”

Heather Cox Richardson, an an American historian and professor of history at Boston College, wrote this week that the new information “raises questions about the role of Secret Service members in the events of January 6”.

She added: “Trump blurred the lines between the Secret Service and the presidency when he appointed Secret Service assistant director Anthony Ornato his deputy chief of staff in December 2019.”

Ornato returned to the agency after Trump left office, and currently serves as an Assistant Director in the Office of Training. He has not commented publicly.

The agency did not immediately respond to inquiries from The Independent.

In a statement, Guglielmi the spokesperson, added: “The Secret Service has been fully cooperating with the Department of Homeland Security Office of Inspector General in every respect – whether it be interviews, documents, emails, or texts.”