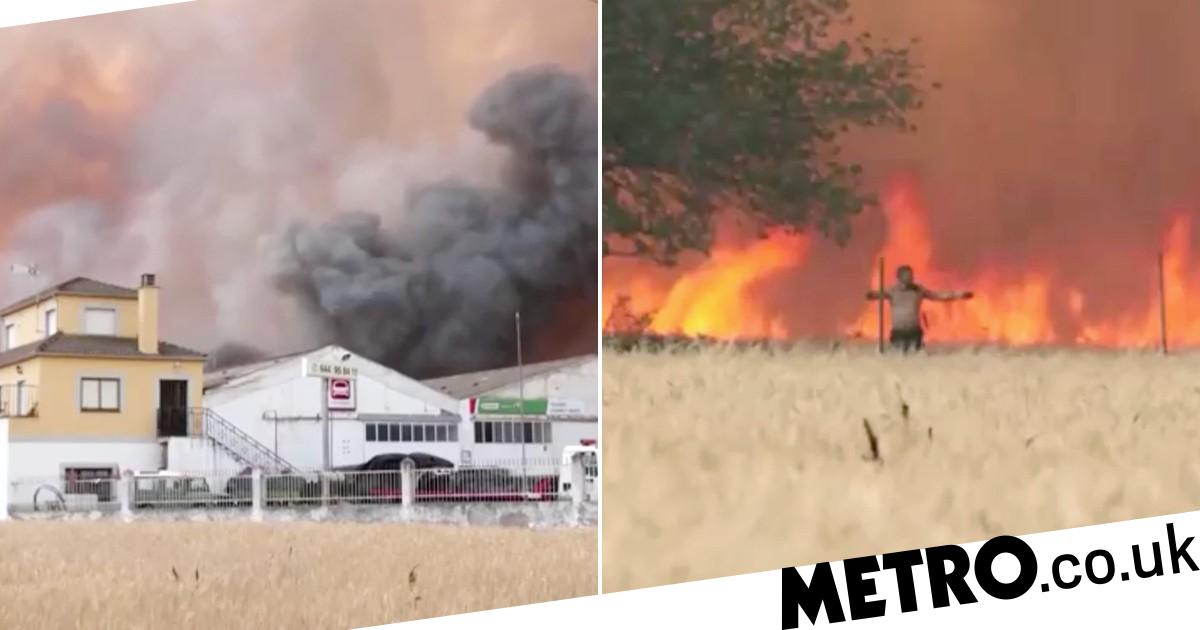 This is the unbelievable moment a Spanish man escaped a wildfire with his clothes ablaze.

Angel Martin Arjona was filmed running out of the towering flames after trying to dig a trench to protect homes near the town of Tábara in the Zamora province.

His excavator was suddenly engulfed when the wind changed the direction of the fire, and he quickly disappeared from view in the sea of smoke.

Miraculously, the 50-year-old warehouse owner then runs out of the blaze while patting out the flames on his clothes.

He was rushed to hospital in a helicopter with serious burns after the dramatic escape.

According to family friend Jose Taba, he is in a serious condition in a specialist burns unit in Valladolid, but has spoken to his wife this week.

‘He is in a very serious condition but he is conscious. He has spoken to his wife or made gestures to her,’ he said.

‘We will have to take things step by step, it’s a very complex situation.’

Although temperatures in Spain are slowly decreasing, they have remained high for the last two weeks.

This has left the country under a warning for ‘extreme danger’ of fires.

Thousands of residents and tourists have been evacuated, while firefighters and volunteers to keep dozens of fires in tinder-dry forests under control.

The fire around Tabara was brought under control while others raged nearby, including around a wind farm.

‘If it is a small, controllable fire just starting, we should try to put it out with earth, sand, water or by cutting some green branches and trying to suffocate it by hitting the base of the flames,’ he told local TV station Antena 3.

It comes after fires raged across the UK on Tuesday – officially the hottest recorded day ever, with several brigades declaring major incidents.

In London, crews had their busiest day since the Second World War tackling fires, which destroyed 41 homes in a matter of hours.