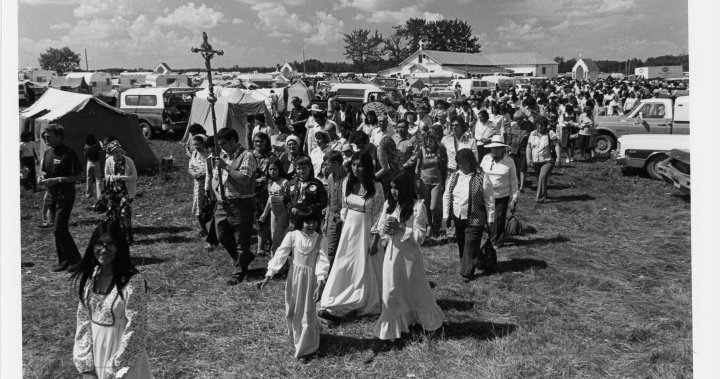 On Tuesday, Pope Francis will accept a longstanding invitation to take part in an annual pilgrimage to Lac Ste. Anne.

While he is only attending now, the pilgrimage has occurred for more than 130 years.

It began when a chief from what is now North Dakota followed a vision and the sound of drumming all the way to the lake.

“When they got here, they thought that this would be the place because in the treetops you could hear the drumming,” Alexis Nakota Sioux Nation Chief Tony Alexis told Global News.

Alexis says the chief and his grandson crafted a raft so they could go out on the lake. The story goes it was misty and the water was rough, but it cleared as they neared a small island.

“As they approached, in the middle of the island was this beautiful woman with her hair down. There was feathers in her hair. She had a full buckskin,” Alexis explained.

“And all around the perimeter of this island were children who were the ones hitting the drum. And then it went into one beat. And they say that after that, they all went into her hand and that was the last they heard of it.”

The Nakota people settled on the land. They came to know the lake as Wakamne, or God’s Lake.

Years later, in 1841, a Métis man invited the Catholics to send a priest to live on the land.

But by 1887 the area had been mostly deserted and Father Joseph Lestanc decided to close the mission.

First, he prayed on it and God instructed him to instead build a shrine to St. Anne and begin a pilgrimage to the site.

“Grandma is very important for Indigenous people,” Lac Ste. Anne Parish pastor Father Les Kwiatkowski explained. “And as we know, St. Anne is the grandma of Jesus. So that’s why people come here — to pray and to be with grandma.”

The first official pilgrimage was held in 1889. It began as a two-day gathering with the Métis, Indigenous and First Nations people attending a Cree sermon on one day, and an English sermon the following day.

Over the century, the gathering has grown from several hundred people to a weeklong event now attracting upwards of 40,000 each year.

All ages, all abilities and all faiths are welcome.

“What our elders will say is that we’re praying to one God and then all of our prayers are the same,” said Alexis.

Early on, pilgrims discovered the lake has healing powers.

People who are hard of hearing or sight would come, as would those with illnesses or people relying on crutches, wheelchairs or walkers.

It is said that some would leave without those aids, hanging crutches, wheelchairs and glasses in the Lac Ste. Anne shrine as they left the site.

The water is also said to heal mental wounds.

“People carry so much pain, sometimes anger and they simply come to that place and they leave this behind,” said Kwiatkowski.

The Pope’s visit is expected to heal mental wounds for some, while it could exacerbate pain for others.

Either way, his participation in the pilgrimage is expected to bring international attention to the National Historic Site.

Upwards of 100,000 people are expected to take a trip to the sacred shore over the next week with many more expected to visit in the future.

Alexis says he hopes they stop and listen for the drums which first brought his people there so many centuries ago.