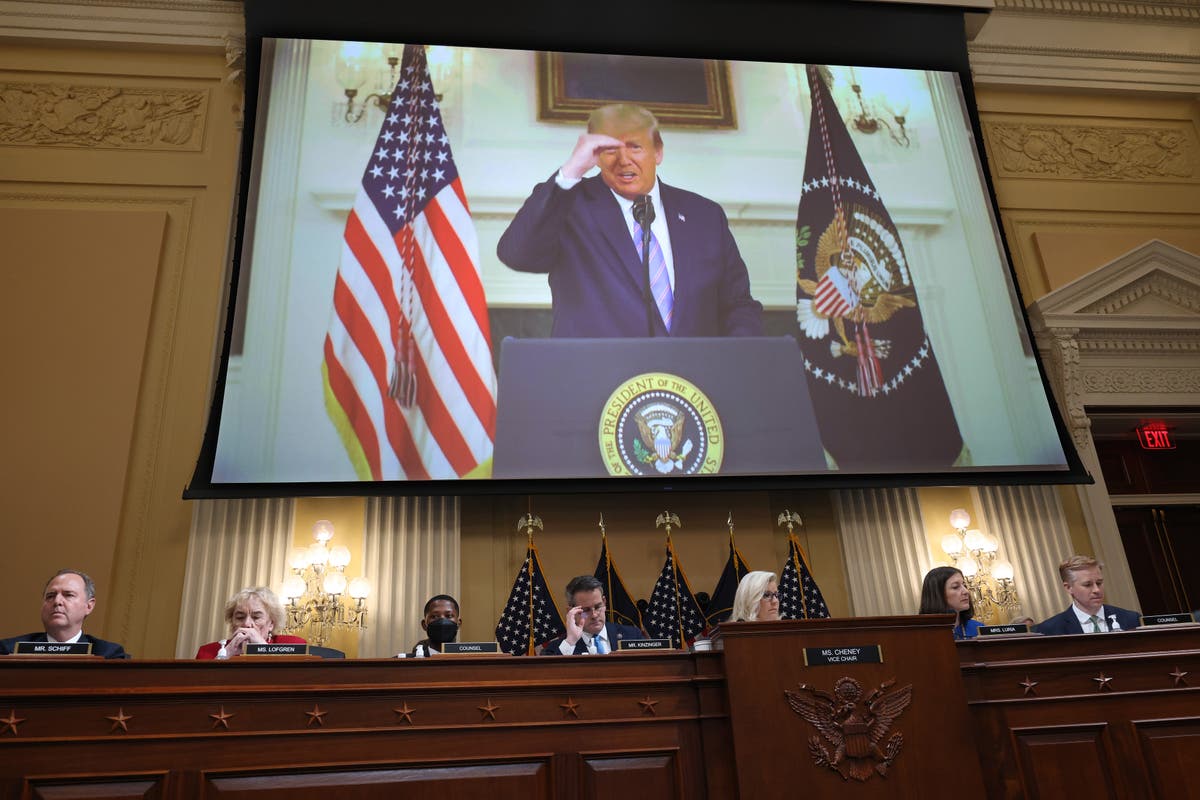 The latest of the January 6 committee’s hearings concluded after close to three hours focusing on Donald Trump’s refusal to call off the mob of supporters who violently attacked Congress.

Alongside the details of Mr Trump’s inaction during the attack on Congress, the panel screened outtakes from a speech the then-president gave on 7 January, and two administration staffers who resigned after the Capitol riot testified in person.

The committee began proceedings by revealing there would be further hearings in September. They also covered the efforts by White House staff to try and get Trump to act as the rioters began to breach the Capitol and desperate radio communications from Mike Pence’s security detail.

Meanwhile, prosecutors have rested their case against far-right agitator and Trump ally Steve Bannon, who is in court facing a charge of criminal contempt of Congress. The Department of Justice argues he simply “decided he was above the law” when refusing to comply with a subpoena from the 6 January select committee.

In other news, former first lady Melania Trump has lashed out at her former chief of staff, Stephanie Grisham, claiming she was not informed about the Capitol riot.

Manhattan District Attorney Alvin Bragg Jr apparently balked on indicting former President Donald Trump over fears he’d lose the case, according to a special prosecutor who resigned from the legal team this year.

The comments were made by Mark Pomerantz, the special prosecutor who quit the case, during an episode of The Cutting Edge podcast, which covers legal matters. The podcast is hosted by Columbia Law School professor John C Coffee Jr and US District Judge Jed S Rakoff.

Graig Graziosi has the details.

‘The rule of law is supposed to extend to the rich and poor alike, to the vulnerable, to the powerful,’ the retired prosecutor said

Voices: I was at the Capitol on January 6. Here’s what the committee hearings missed out

I have reported on political violence and extremism in the Middle East as a foreign correspondent. My experience there taught me that for extremists to survive and operate successfully, they need a base of support among the wider public. The attack on the Capitol felt like a threshold had been crossed.

I was at the Capitol on January 6. Here’s what the committee hearings missed out

I have reported on political violence and extremism in the Middle East as a foreign correspondent. My experience there taught me that for extremists to survive and operate successfully, they need a base of support among the wider public. The attack on the Capitol felt like a threshold had been crossed

Former first lady Melania Trump says she “would have immediately denounced the violence” during the January 6 riot at the US Capitol, but a top aide committed a “dereliction of duty” and failed to brief her about what was happening soon enough to make a public statement.

Donald Trump is seen literally unable to say he lost the 2020 election in a newly released video presented by the Jan 6 committee.

As the committee probing the attack on the US Capitol held its eighth presentation, it played video of the then president repeatedly rehearing a speech condemning the violence, that his staff had urged him to make.

“I don’t want to say the election’s over,” Mr Trump is heard to say in an outake of a video his staff filmed on Jan 7.

Andrew Buncombe watched the hearings for The Independent.

Donald Trump watched his supporters storm the US Capitol on television while his senior staff begged him to call the rioters off, the January 6 committee has claimed.

Democratic congresswoman and committee member Elaine Luria introduced a prime-time hearing on Thursday by saying the committee would present evidence to show Mr Trump failed to act while the attack unfolded.

“This hearing is principally about what happened inside of the White House that afternoon, from the time when President Trump ended his speech until the moment when he finally told the mob to go home. A span of 187 minutes, more than three hours,” she said.

Video footage released by the January 6 committee shows Republican senator Josh Hawley running away from pro-Trump protesters just hours after he was pictured raising his fist in solidarity with them.

Democratic congresswoman Elaine Luria revealed the video at a prime-time hearing on Thursday after first showing a photograph of Mr Hawley showing his support to protesters before Congress met to certify the presidential election.

Members of the US Secret Service were unsure of their ability to successfully protect Mike Pence during the January 6 attack and left emotional messages for their families as the riot drew closer, the Jan 6 committee revealed on Thursday.

The shocking revelation is one of the most damaging of the hearings so far: The vice president’s own security team was fleeing in terror from the president’s supporters through the Capital as those same supporters who voted for Mr Pence in November chanted death threats against him.

John Bowden reports from the hearing.

Chaotic scenes were witnessed after an armed man attempted to attack Lee Zeldin, the Republican candidate for New York governor, during his campaign speech.

He was giving a speech when a man climbed onstage and appeared to begin wrestling with the congressman, said Katie Vincentz, a spokesperson for Mr Zeldin’s campaign.

Mr Langworthy said that Mr Zeldin had “just a little scrape” but it is not something that anyone would consider an injury.

The attacker was taken into custody after he was overpowered by a crowd and the congressman continued his speech.

He is challenging incumbent Democratic Governor Kathy Hochul this November.

More hearings to come in September

The co-chairs of the January 6 select committee have confirmed that their investigation would continue throughout the summer, and the panel will reconvene for a second round of public hearings in September.

Congressman Bennie Thompson, the committee chair, and vice-chair Liz Cheney made the announcement at the outset of Thursday’s hearing after noting in previous meetings that more witnesses continue to come forward and offer testimony to lawmakers.

Recap: Pence’s bodyguards said goodbye to family as Trump ‘chose not to act’ during Capitol attack

The violence that unfolded as a pro-Trump mob stormed the Capitol on the day Congress certified Joe Biden’s 2020 election victory so alarmed the Secret Service agents charged with protecting then-vice president Mike Pence that some of them called their family to say goodbye, all while then-president Donald Trump did nothing, according to testimony delivered before the House January 6 select committee on Thursday.

The prime-time session, the eighth in a series of hearings the nine-member panel has used to present what it has learned about the Capitol attack over its year-long investigation, revealed that Mr Trump’s inaction during the 187 minutes between when he finished a speech at a rally on the Ellipse that day to when he took to the White House Rose Garden to film a now-infamous video in which he told his supporters to go home after calling them “very special”.

Andrew Feinberg reports for The Independent from the latest shocking January 6 hearing.