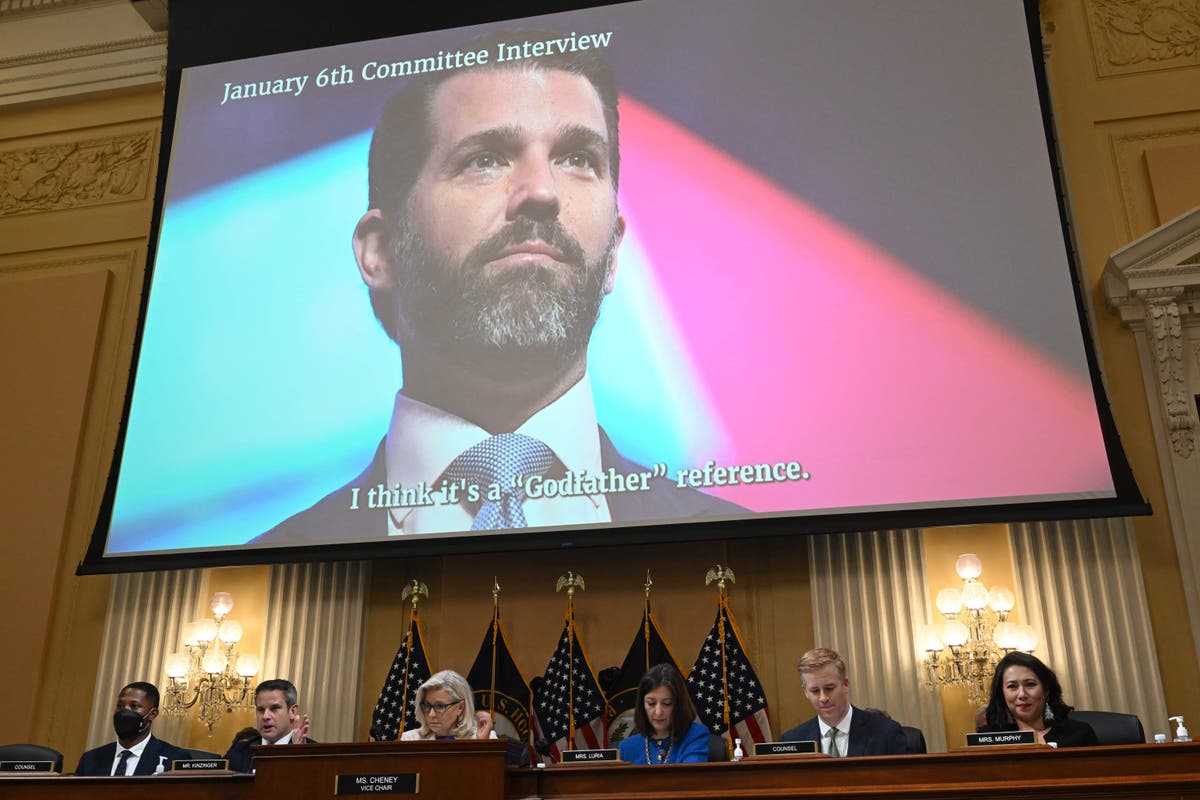 Donald Trump Jr was ridiculed on social media after he was asked to explain what he meant by “go to the mattresses” in texts with the White House chief of staff during the final hearing of the January 6 committee.

The pre-recorded testimony of the former president’s eldest son was played during Thursday’s hearing.

In his texts to Mark Meadows, Mr Trump Jr appeared to implore him to force his father, Donald Trump, to stop the attack at the Capitol by his followers.

“He’s got to condemn this shit. Asap. The Capitol police tweet is not enough,” Mr Trump Jr said in one of the text messages to Mr Meadows which was displayed on the screen.

Mr Meadows replied: “I am pushing it hard. I agree.”

“This (is) one you go to the mattresses on,” Mr Trump Jr shot back. “They will try to (expletive) his entire legacy on this if it gets worse.”

In his interview with January 6 committee, the former president’s son was particularly asked what he meant by the phrase ”go to the mattresses”.

Mr Trump Jr was heard saying that it was a “Godfather” reference that urged Mr Meadows to “go all in” to have his father condemn the riots.

“Just a reference for going all in. I think it is a ‘Godfather’ reference,” he said.

The explanation by Mr Trump Jr has elicited humorous reactions from viewers who questioned if even understood the phrase in the movie and said the “mafia families” reference is perfect for the Trumps. The phrase, used in the context of Mario Puzo’s classic novel, means to prepare for a lengthy war.

“Junior’s ‘going to the mattresses’ Godfather reference makes absolutely no sense in the context he said it. That refers to people sleeping on mattresses in hideouts and not going home during a war between mafia families. Figures his scrambled mind couldn’t even get that right,” Twitter user Ron Filipkowski said.

“Is there anything more ’Donald Trump Jr’ than using a phrase from The Godfather and having no idea what it means?” another user Linka Banks said.

A Twitter user also noted that “the room laughed mockingly at his answer” when Mr Trump Jr said “go all in” was a Godfather reference.

The hearing also showed Mr Trump refusing to say he “lost the election” in new footage in which he was seen rehearsing his speech.

It also showed radio transmissions from terrified Secret Service agents worried about their own safety and that of Mike Pence; according to an anonymous official, some agents even left messages for family members worrying that they would not return.