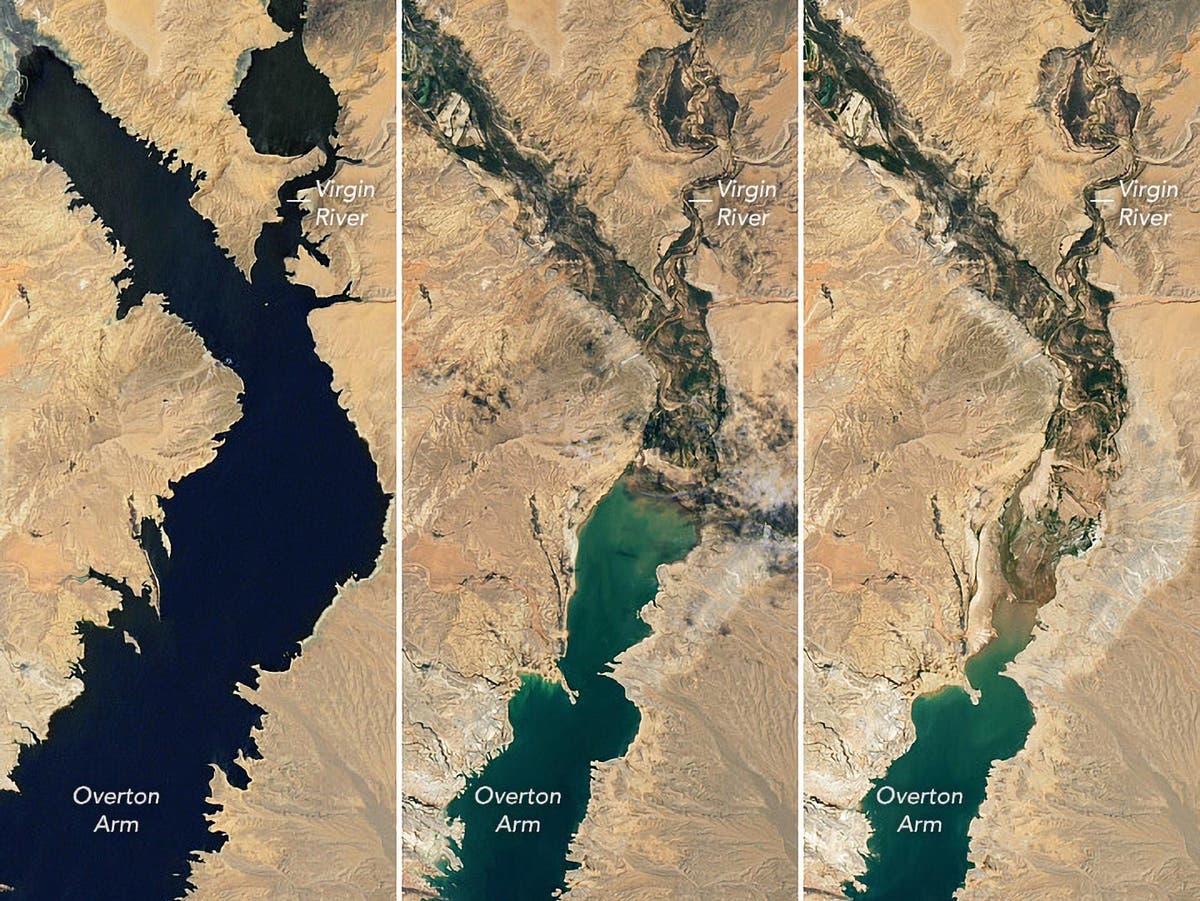 Satellite images released by Nasa have shown water levels at historic lows in Lake Mead, the US’s largest reservoir, as a result of a severe 22-year drought in the American southwest.

Images released by Nasa in recent days show the extent of the drought’s effects on Lake Mead, which is now at a historic all time low of 1,043ft above sea level, or 27 per cent capacity, as the agency said this week.

In 2020, when the first of the three images from Nasa’s Landsat satellites was taken, Lake Mead was as high as 1,199.97ft above sea level.

Water levels have dropped dramatically in the two years since 2020 with a fall of more than 150ft, leaving the surface area of America’s largest reservoir far smaller than before.

Reports said the remains of a human body and boats have been recovered as Lake Mead water recedes.

The lake has itself been on a 22-year downward trend since the summer of 1999, when it last reached full capacity of 1,220ft, Nasa added.

The agency, which said the record-low water level was recorded by the US Bureau of Reclamation on 18 July, said the images from its Landsat satellites provided “a stark illustration of climate change and a long-term drought that may be the worst in the US West in 12 centuries.”

A warming climate in recent decades has seen both a reducton in rainfall and an increase in drought conditions, as well as higher demand for irrigation and household water use, meaning reservoirs such as Lake Mead are unable to build-up supplies during winter months, causing long-term decline.

States such as Colorado have been experiencing a years long drought in fact, with 35 per cent of nine Western US sates currently facing extreme drought and 74 per cent facing some drought, which according to The Los Angeles Times has seen water restrictions enforced.

Lake Mead serves about 25 million people and has done so since its creation in 1937 along with the opening of the Hoover Dam, which requires a water elevation of 1,000ft to continue operating hydropower turbines at normal levels.

Nasas Earth Observatory added of the images: “The light-coloured fringes along the shorelines in 2021 and 2022 are mineralised areas of the lakeshore that were formerly underwater when the reservoir was filled closer to capacity,

The phenomenon is often referred to as a “bathtub ring” because of the light-coloured “ring” created by mineral compounds left behind when a lake falls below its usual waterline, with calcium carbonate creating a white colour for example.

“The only time the bathtub ring is not visible is when the lake is completely full,” says the US Geological Survey of the phenomenon.