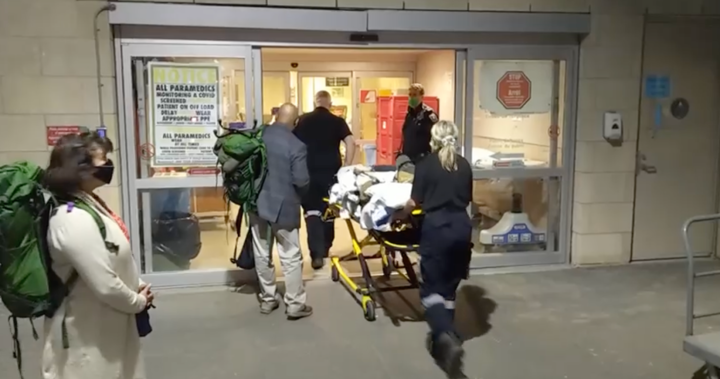 A Canadian veteran badly wounded while serving with the Ukrainian armed forces is recovering at an Ottawa hospital after being evacuated from the war zone.

The retired member of the Canadian military told Global News he was taking part in an operation with Ukraine’s international legion when he hit a Russian anti-tank mine.

In an exclusive interview, he said he didn’t know how he survived the explosion, which left him with a broken neck, fractured ribs, burns, a concussion and nerve damage.

The 50-year-old spent two months receiving treatment in six Ukrainian hospitals until Canadian military veterans extracted him to Warsaw and flew him to Toronto last week.

He was then taken to Ottawa Civic Hospital.

The Canadian veterans organization Aman Lara worked with Can-Aid and the non-profit Smart Medical Aid to orchestrate his return.

“This really was a Canadian team effort,” said Brian Macdonald, the executive director of Aman Lara, whose mission is to “get good people out of bad places.”

“He was stuck,” Macdonald said. “You’ve got a wounded guy in Ukraine. There’s no government support available. So how do you get somebody back from a situation like that?

“And we were able to pull together a team of professionals, medical specialists, logistics specialists, and we built that team and we got him home successfully with really minimal discomfort to him.

“So it’s a huge success story.”

The wounded volunteer, who asked to be identified only as J.T., said he was moved by the help he received from all those who worked to bring him home.

“Their level of coordination and professionalism was beyond anything I could even … thought of,” he said.

Following Russian President Vladimir Putin’s Feb. 24 invasion of Ukraine, J.T. was moved by scenes of families torn apart by Russia’s war. As a recently-retired Canadian Forces combat engineer, who had served in Afghanistan, Bosnia and Macedonia, he felt he had skills to offer.

He arrived in Ukraine in mid-March and joined the International Legion, a branch of the armed forces of Ukraine. After training, he was sent into combat in the Zaphorozia region.

He said his unit included British and American veterans, and he met four of the Canadians who make up a significant proportion of the internationals fighting in Ukraine.

In May, he was clearing mines for a Ukrainian strike force that was preparing to attack a Russian position.

An observation team sent forward in advance of the assault triggered a mine. He got into a pickup truck to help extract them but it was stuck on railroad tracks, he said.

“So I took over the driver’s seat and I said, ‘OK, I’m just going to back this truck down beside the train tracks.’ At which point, that was the last thing I remember.”

For weeks, he was moved from hospital to hospital, undergoing skin grafts and reconstructive surgery. He said he could only communicate with medical staff using Google translate.

Meanwhile, his friend Erica was trying to get him home. She spoke to the federal government, looked into medical evacuation flights and organized an online fundraising campaign.

“It was pretty stressful. In the end, we ended up having some people step forward to offer to help,” she said. “So that felt like a miracle to me. That was incredible.”

“I’m beyond grateful for their help.”

Macdonald said he did not know J.T. personally but members of his team did. “And we sort of wondered, if we don’t do this for this guy, who else is going to do it?”

“We were uniquely suited to do it because of all the things we learned in Afghanistan, and the missions that we’ve run in Ukraine and Poland. So when this came up, we said this is absolutely something we can help with.”

But first they had to find J.T.. Unbeknownst to the Canadians, he was not registered in the Ukrainian health system under his real name. Instead, he was listed as “Jack Daniels.”

Global in Ukraine Exclusive: Interview with family of Russian soldier killed in Ukraine

Canadian veterans entered Ukraine and took him by ambulance to the western city of Lviv, and then to Poland, said Greg Lawlor, who organized the mission.

He was stable enough to fly on a commercial aircraft, which simplified the process. “He’s one of us,” Lawlor said of J.T., who had served in his brigade. “I mean, you know, no man left behind.”

Erica said she was “overjoyed” he was back in Canada. “I wish it could have been sooner, but it is what it is,” she said. “He’s been really well taken care of by the hospital here. The staff are all incredible.”

“The doctors have found some issues we didn’t know about until he arrived back in Canada. So that’s been a little bit stressful, trying to process new injuries and issues,” she said.

“But he’s here getting great care, so I’m thrilled.”

4:01
U.S. official says Ukraine’s Donbas ‘not lost yet’ as Russia says goals not limited to region