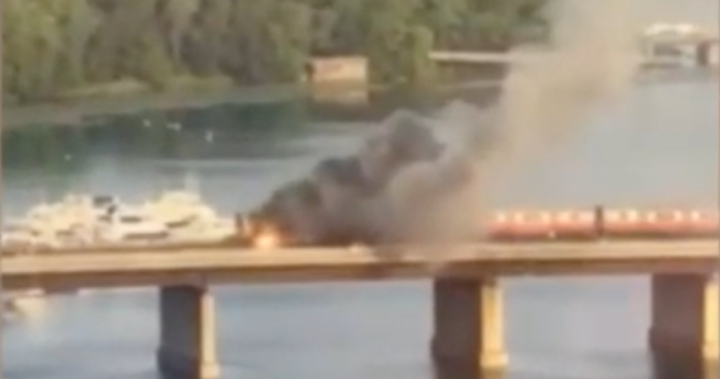 A train bound for Boston caught fire during the Thursday morning commute prompting a frantic evacuation, with passengers climbing out of windows to escape the smoke and one person even leaping into the river below.

The MBTA’s Orange Line train was on a bridge crossing the Mystic River north of Boston as it approached Assembly Station around 7 a.m. when flames and smoke were spotted billowing out of the lead car, according to an MBTA statement.

About 200 passengers were on board at the time and most were evacuated by MBTA personnel. No injuries were reported and the person who jumped into the water swam to safety and declined medical attention, as reported by CBS News.

No injuries after fire breaks out on P.E.I.-Nova Scotia ferry

The unnamed woman who leapt into the Mystic River recalled thinking, “I think I’m safer in the water right now than walking down the tracks,” she told CBS Boston.

“I was very scared for all of us,” she added. “We had no idea what was happening. It was like pandemonium.”

Jennifer Thomson-Sullivan, 42, told The Boston Globe she was one of the passengers in the lead car that caught on fire. She recounted seeing flames licking both sides of the train car.

“That’s when everyone started freaking out,” she said. “In my brain at that moment, I thought, ‘Oh my god.’ People rushed to the back of the car where I was sitting. There was a gentleman frantically trying to open the emergency exit. But the door would not open.”

Thomson-Sullivan said when the man couldn’t get the door open, he kicked a window out instead.

“From that point on, people started throwing themselves out the window,” she said. “They didn’t stop to consider the third rail or what if another train was coming in the other direction… People just went for it.”

The fire was likely caused when a piece of metal came loose from the underside of the Orange Line train and made contact with the third rail, which conducts electricity along train tracks.

MBTA general manager Steve Poftak said in a press conference Thursday afternoon that “a metal sill which runs along the base of the vehicle, approximately one foot by six foot in dimension, came loose on car 1251. This sill came loose and then made contact with the third rail, resulting in the sparking.”

Within two minutes of the fire breaking out, Poftak said, a train in the oncoming direction was halted and a call went in to cut power to the burning train.

“Some folks made the decision to self-evacuate, which I understand, but we also did have an evacuation through the rear of the train,” Poftak said, adding that “there were a number of people who self-evacuated through several windows on the train.”

Four windows were removed during the chaos, according to Poftak.

Despite the influx of criticism about the MBTA’s infrastructure, Poftak said he remains confident in the transit system.

“I took the Orange Line here,” he said. “I’ll take it back. I regularly take public transportation.”

Boston Mayor Michelle Wu said the fire was “evidence of an aging transit system in crisis,” adding that she is working towards “rapid systemwide upgrades.”

For the safety of our community & future of our city & region, it’s time for transformation at the @MBTA. Boston is ready to help lead. pic.twitter.com/TwOqwpCclM

The train that caught on fire first went into service in 1980 and was last inspected on June 23, according to Poftak. The MBTA is conducting inspections on all Orange Line vehicles in the wake of the fire.

Poftak apologized to riders, calling Thursday’s fire “a very frightening event and not the service that the MBTA wants to provide.”