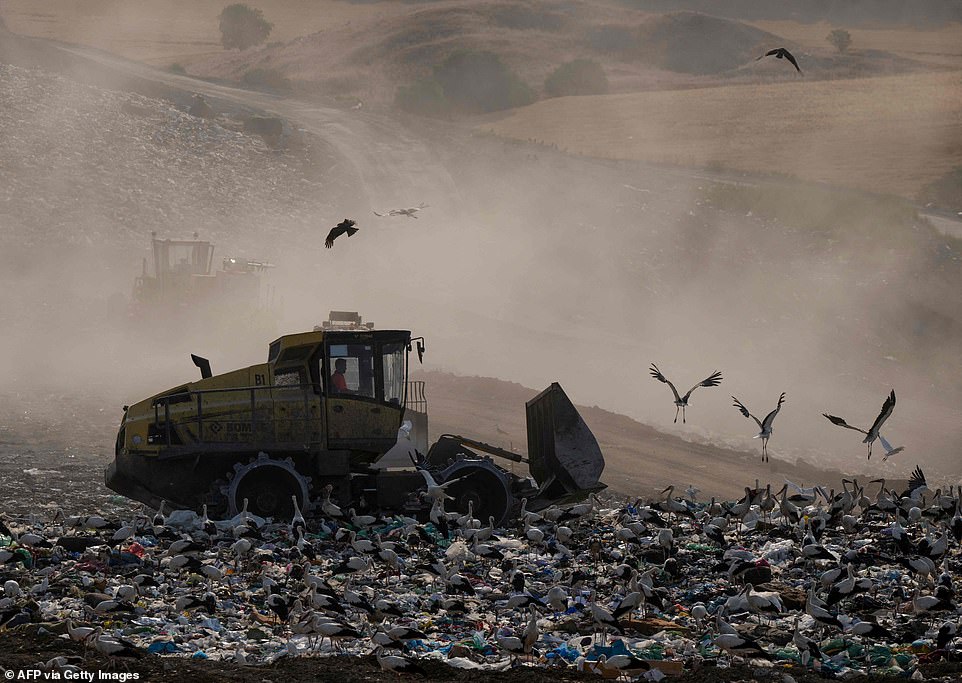 Hundreds of white storks dodge garbage trucks as they look for scraps of food among the mountains of multicoloured garbage bags at a sprawling landfill near Madrid.

The long-legged birds have traditionally flown from across Europe to African pastures for the winter and returned in the spring.

But the abundant food found in landfills combined with warmer weather are making growing numbers of storks skip this arduous journey and stay in Spain for the winter.

‘For us they are part of the landscape,’ said Carlos Pinto, a sanitation worker at a landfill in Pinto roughly 18 miles south of Madrid.

The landfill receives between 200 tonnes and 300 tonnes of food waste per day and the storks head immediately to the zones ‘where there is fresh garbage,’ he added.

The scene is repeated across Spain, with many storks opting to nest close to landfill sites where they live year-round.

Hundreds of storks surround a truck at a landfill in the outskirts of Pinto near Madrid on July 14, 2022 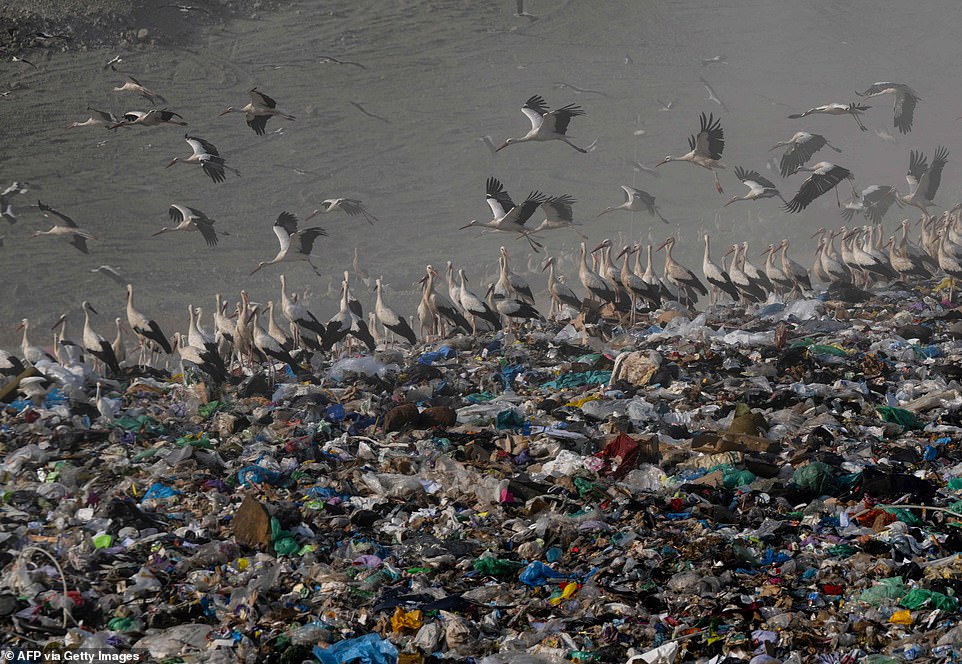 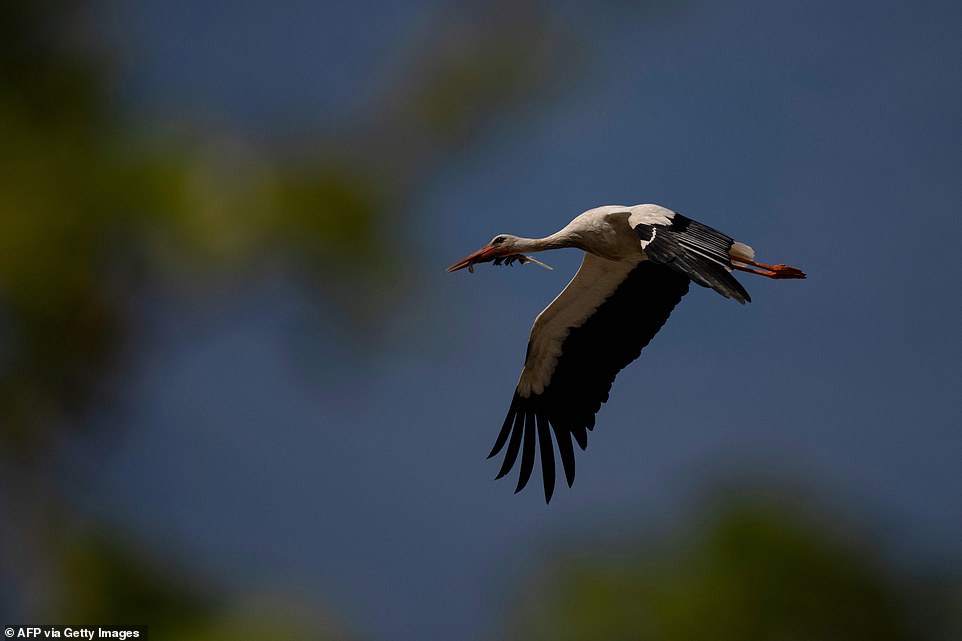 A stork flies in Rivas Vaciamadrid near Madrid on May 24, 2022, clutching what appears to be a feather in its beak 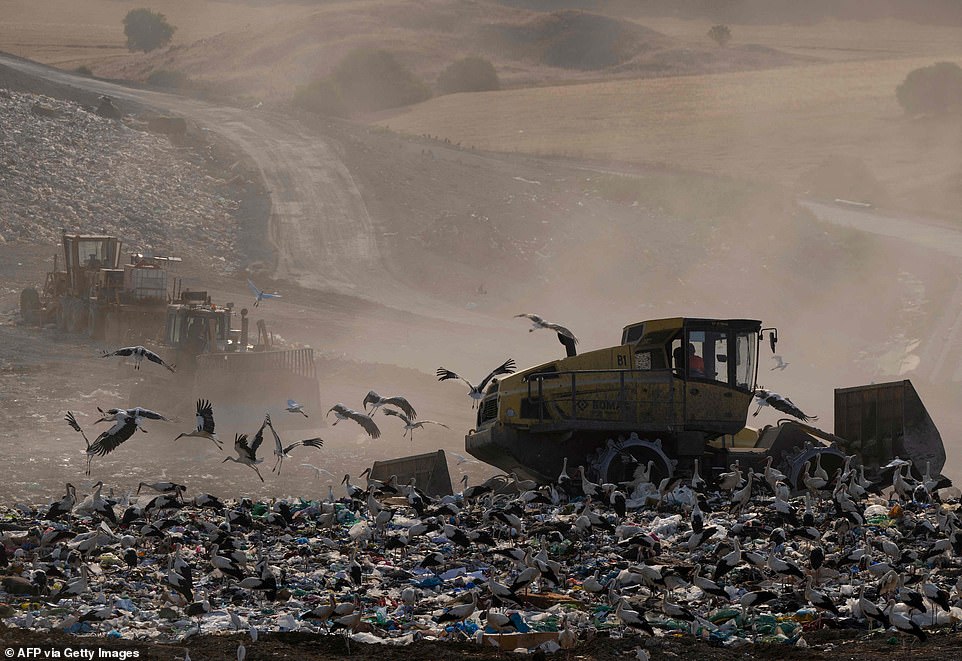 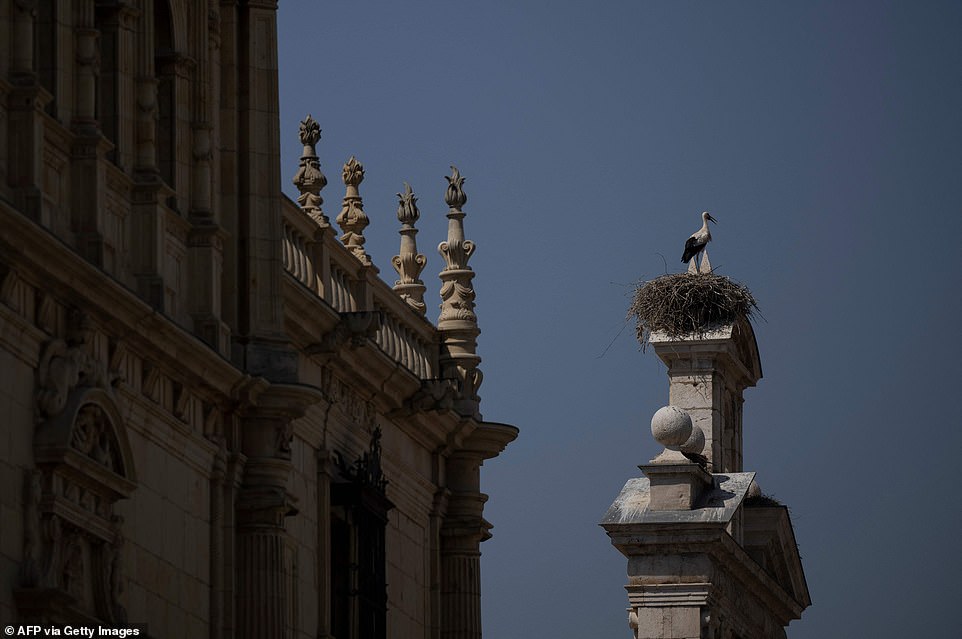 A stork stands on its nest in front of the university of Alcala de Henares near Madrid on July 16, 2022

In Alcala de Henares, the birthplace of ‘Don Quixote’ author Miguel de Cervantes near Madrid, white storks have become a symbol of the town because they have become so numerous.

‘Wherever you look, there are storks,’ said Almudena Soriano, the town’s veterinarian.

Stork nests crown the Alcala’s bell towers and the clattering sound they make with their long beaks can be heard throughout the town.

Soriano estimates that ‘about 70 percent of storks no longer migrate’ to Africa, mainly because of the easily available food they can find in Spain in landfills.

This allows them to avoid the dangerous crossing of the Strait of Gibraltar separating Spain from Morocco which measures just nine miles but is often battered by strong winds.

‘Many die on the way. The adult storks who have already made the trip do not want to repeat the experience,’ said Soriano.

‘And since they move to find food, an open dump for them is an all-you-can-eat buffet. There is no need to leave anymore.’

Before, Spain was just a stop on the birds’ annual migration to Africa but now a significant number of white storks spend the winter in the country, according to the NGO.

This includes storks born in Spain as well as those that come from European nations further north like Denmark, Germany and the Netherlands.

Some storks return to northern Europe after winter while others remain permanently in Spain.

Younger storks still have the instinct to migrate to Africa but they make the trip without their parents, said SEO Birdlife ornithologist Blas Molina. 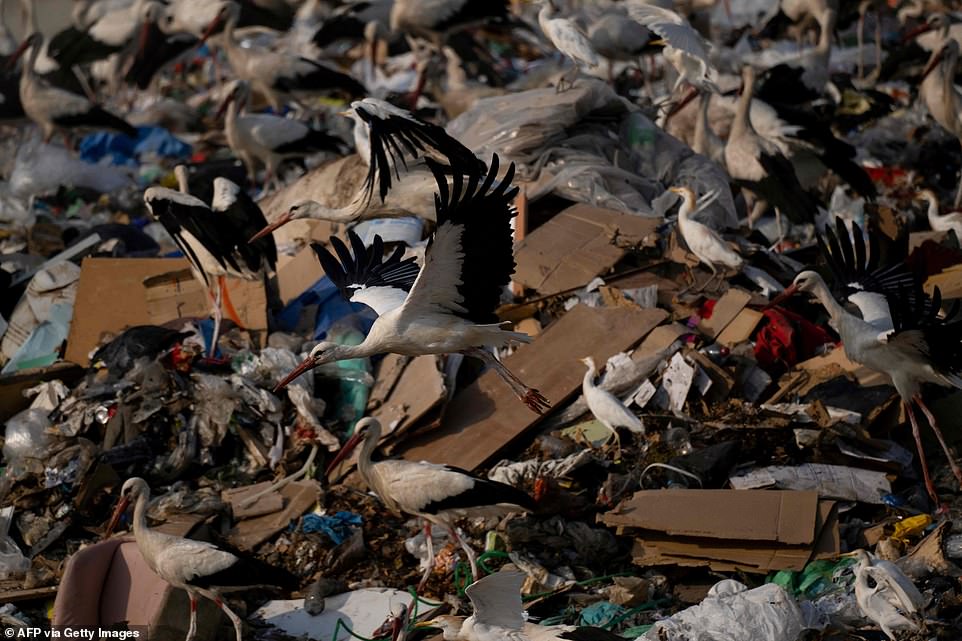 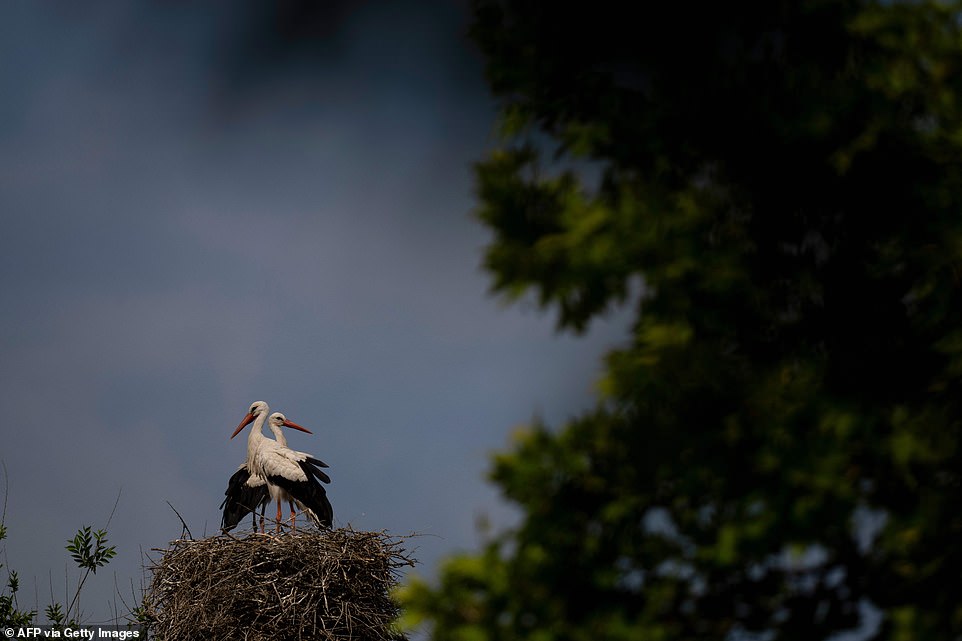 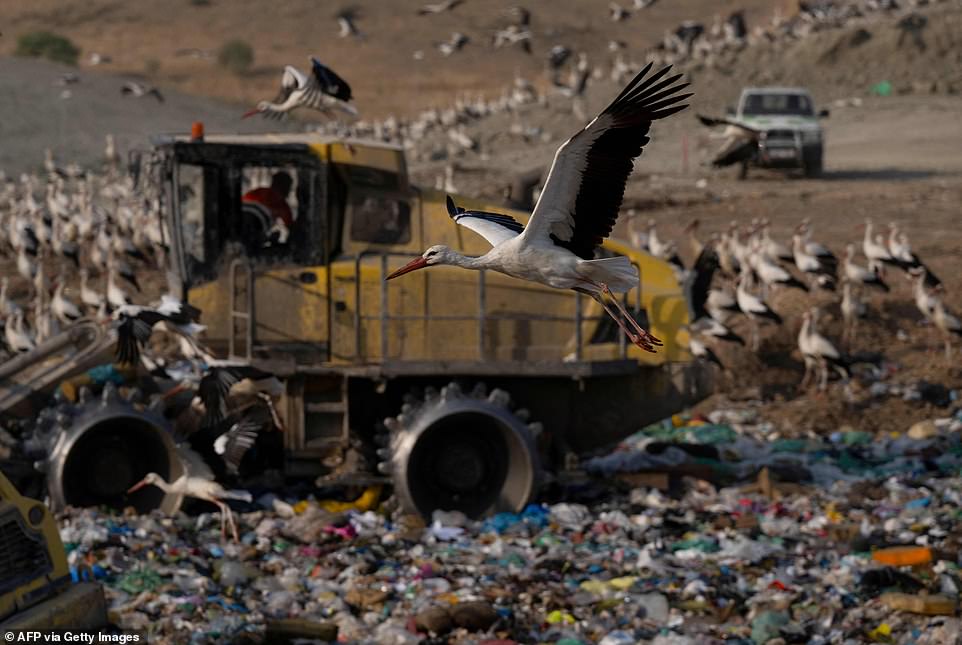 Before, Spain was just a stop on the birds’ annual migration to Africa but now a significant number of white storks spend the winter in the country 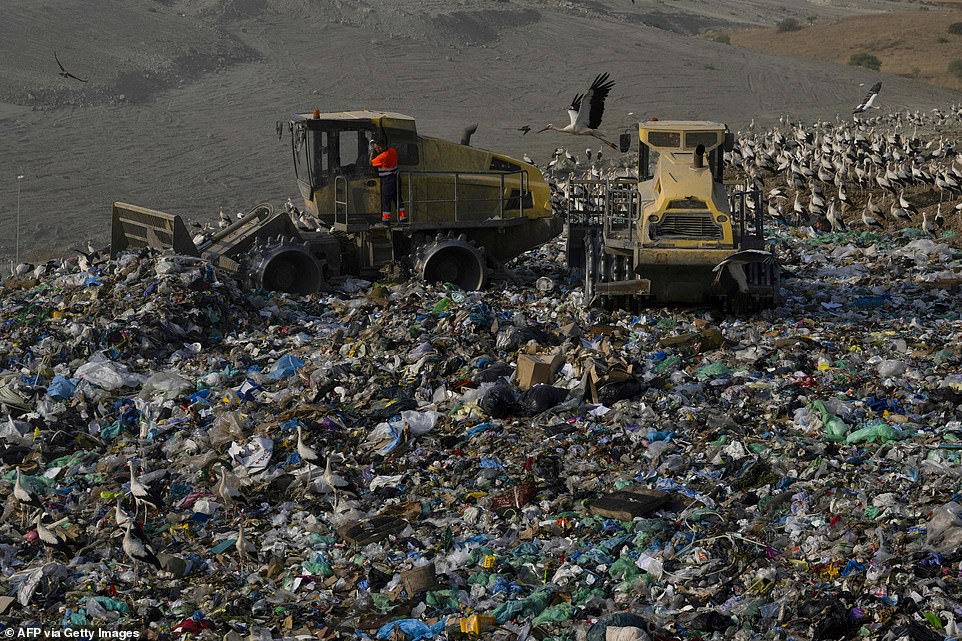 Some storks return to northern Europe after winter while others remain permanently in Spain, as the landfill offers such a rich variety of sustenance and material with which to build nests 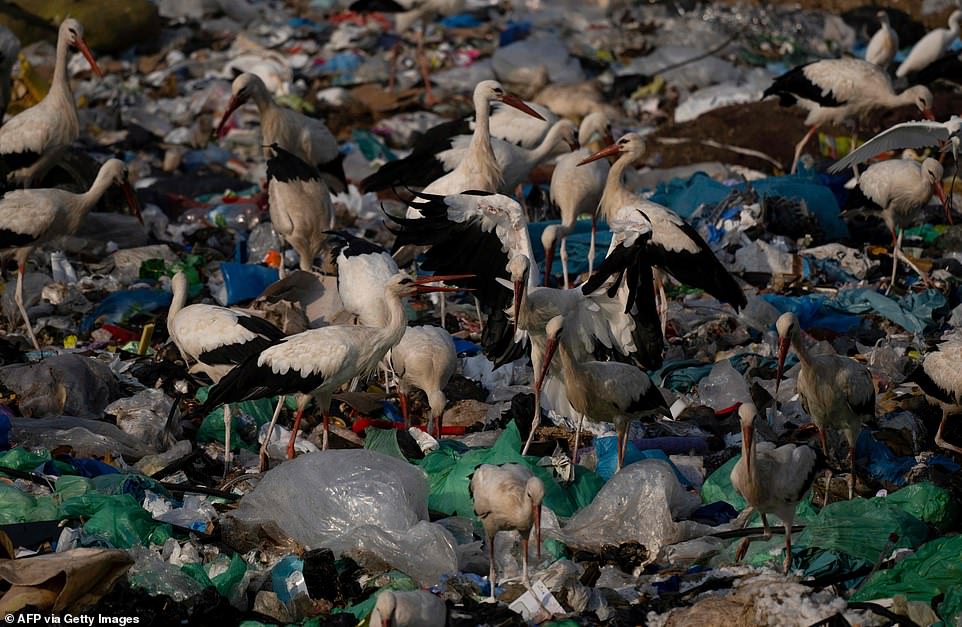 The change in the stork’s migratory habits is a clear example of the ‘effects of human activity on biodiversity,’ said SEO Birdlife ornithologist Blas Molina

While the easy availability of food at landfills is the main reasons storks have stopped migrating, it is also ‘probably due to tendency towards higher temperatures’ caused by climate change, the NGO said in a recent report.

Adult storks are staying ‘a little bit further north’ within the Iberian Peninsula whereas before they stopped off in the southeastern region of Extremadura and Andalusia in the south, said Molina.

The change in the stork’s migratory habits is a clear example of the ‘effects of human activity on biodiversity,’ he added.

The municipality of Pinto is considering covering its landfill site to prevent storks from swallowing plastic and other potentially harmful items. If it does, the storks may leave.

Alcala closed its landfill last year but set up giant feeding stations to ensure the storks had enough to eat and stayed in the town.

The scheme appears to be working as the town’s stork populations has held steady.