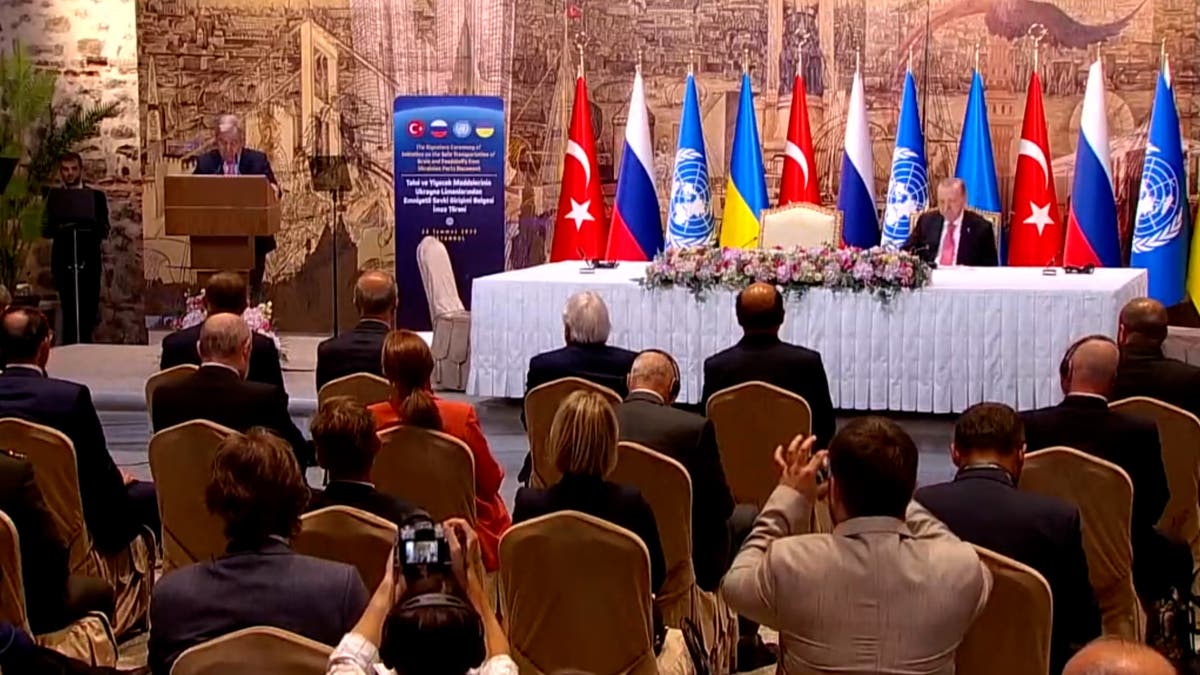 At the signing in Istanbul, Russian and Ukrainian government ministers signed the deal separately, did not sit at the same table, and avoided shaking hands.

Turkish president Recep Tayyip Erdogan said that the deal that he helped oversee – to restore exports to the pre-war level of 5 million tonnes a month – would be central to alleviating hunger in developing countries.

He said the deal would “prevent billions of people from facing famine”, while UN secretary-general Antonio Guterres – who also oversaw the agreement – hailed it as a “beacon of hope”.

The UN expects the deal to be fully operational in a few weeks. Under the plan, Ukrainian officials will guide ships through safe channels across mine-ridden waters to three ports in the Black Sea, including the hub of Odesa.

The ships will then be loaded with grain before they exit Ukrainian territorial waters, enter the Bosphorus strait to a Turkish port for inspection, and later head to their destinations.

Russia and Ukraine signed a key agreement to allow grain shipments to resume through the Black Sea.

UN secretary general Antonio Guterres and Turkish president Recep Tayyip Erdogan oversaw the signing of an agreement that would allow Ukraine to resume its shipments and Russia to export grain and fertilizers.

Speaking after the agreement was signed in Istanbul, Mr Erdogan said the deal would “prevent billions of people from facing famine”.

Justin Trudeau said that the G7 would ensure a deal to resume Ukrainian grain exports through the Black Sea does not “put Ukraine further at risk of being further invaded and attacked by Russia”.

The Canadian prime minister spoke after Ukrainian and Russian government ministers signed a deal in Turkey that would allow Ukrainian grain shipments to resume to help alleviate global hunger.

He said: “The G7 is working closely with partners like Turkey and others to ensure that we can get that grain out of Ukraine and to places around the world where it’s needed without putting at risk Ukraine‘s sovereignty and protection.”

US ‘will hold Russia accountable’ over Ukraine grain deal

The US said it will work to hold Russia accountable for implementing the UN-led deal it agreed with Ukraine to allow grain exports in the Black Sea to resume.

This is according to Linda Thomas-Greenfield, the US ambassador to the UN.

The US also wants China to stop stockpiling grain and distribute it across the world to help alleviate global hunger, James O’Brien, head of the US State Department’s Office of Sanctions Coordination, told reporters.

UK says deal to resume grain exports ‘must be implemented’

The UN-brokered agreement to resume grain exports from Ukraine “must be implemented”, the UK said.

Foreign secretary Liz Truss commented after the deal was signed by Ukrainian and Russian government ministers in Istanbul. The UN said it expects the deal would be fully operational in a few weeks.

She said: “Putin’s barbaric invasion of Ukraine has meant some of the poorest and most vulnerable people in the world are at risk of having nothing to eat.

It is vital that Ukrainian grain reaches international food markets, and we applaud Turkey and the UN secretary-general for their efforts to broker this agreement.

“The UK and our allies have been pushing hard to reach this point. Now, this agreement must be implemented, and we will be watching to ensure Russia’s actions match its words.

“To enable a lasting return to global security and economic stability, Putin must end the war and withdraw from Ukraine.”

Which countries does Ukraine supply with grains?

Ukraine was one of the main exporters of grains and vegetable oils until Russia invaded it in February.

According to figures provided by the UK foreign office, Ukraine provided about 30 per cent of Egypt’s grain and wheat last year.

Other figures show that many countries in Africa, Asia, and the Middle East have been big importers of Ukrainian grain.

European Commission vice-president Josep Borrell said that the EU “remains committed to helping Ukraine bring as much of its grain into global markets as possible.”

He said that the UN-brokered deal between Ukraine and Russia to allow the resuming of grain shipments through the Black Sea is a “critical step in overcoming the global food insecurity caused by Russia’s aggression against Ukraine.”

Russia said it will stick by its promise to allow Ukraine to resume its grain exports as per the deal struck by the two countries in Turkey today.

Defence minister Sergei Shoigu vowed that Russia would not “take advantage” of the de-mining and opening of Ukrainian ports in the Black Sea.

The promise was made by defence minister Sergei Shoigu

Boris Johnson has spoken to Volodymyr Zelensky today about the deal agreed between Russia and Ukraine to allow Ukrainian grain to be exported to developing countries amid their ongoing war.

A Downing Street spokeswoman said: “The Prime Minister welcomed today’s announcement of UN-brokered deal to get grain out of Ukraine via the Black Sea and end Russia’s blockade.

“Both the Prime Minister and President Zelensky stressed the need for the deal to be implemented in full by all parties.”

Grain deal ‘only possible because of Ukraine’s military wins’

A Ukrainian government minister who signed the UN-led deal to unblock Ukraine’s ports for grain exports said the agreement was only possible thanks to his country’s military successes.

Infrastructure minister Oleksandr Kubrakov, speaking on television, said the recapture from Russia of Snake Island, a small strategically-located island in the Black Sea near several key Ukrainian ports, was an “important moment.”

He also said that Ukraine does not see the risk of Russian ships reaching Ukrainian ports through safe corridors that have been agreed by the deal, as they would be fired upon by Ukrainian missiles in such an event.

The safety of crews on ships navigating mine-ridden waters in the Black Sea has been raised as an issue after Ukraine and Russia signed a UN-brokered deal to resume Ukrainian grain exports.

Guy Platten, secretary general of the International Chamber of Shipping (ICS), said: “This is a long-needed breakthrough for the millions of people who rely on the safe passage of grain to survive.

“But although this is an important step, lots of work remains to be done.

“Ensuring crew safety will be crucial if we are to get this agreement moving quickly.

“Questions remain over how ships will navigate heavily mined waters, and how we can effectively crew the ships in the region to meet the suggested deadline.”