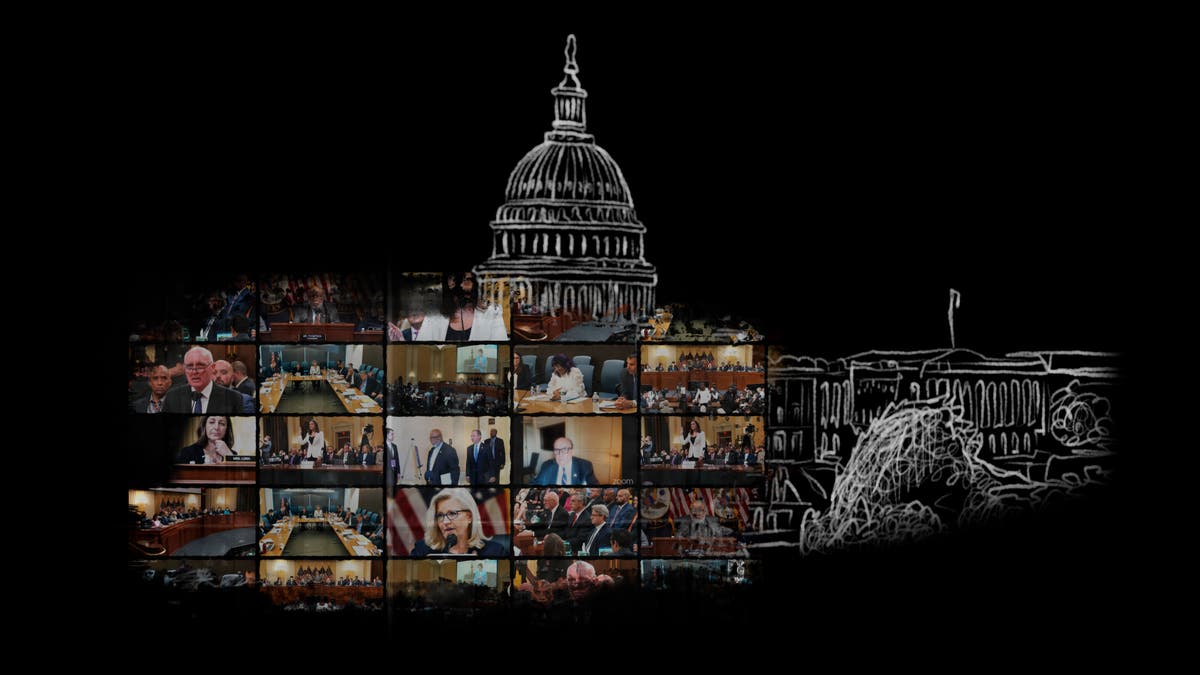 Through eight hearings, 20 live witnesses and dozens of hours of recorded testimony, the House Jan. 6 panel has focused its case squarely on former President Donald Trump.

The panel has unveiled stunning evidence about the Capitol insurrection over six weeks of hearings, laying out in vivid detail what the panel calls an “attempted coup” by Trump as he desperately sought to overturn Joe Biden’s election. Culling material from more than 1,000 witnesses, lawmakers have shown that officials inside the government fought Trump’s schemes at every turn, calling them “nuts” and “unhinged.”

From jaw-dropping testimony, to shocking video, to never-before-seen documents, revelations came fast during the tightly scripted hearings. Here are the moments that stood out:

The first hearing, aired in prime time and watched by more than 20 million viewers, set the stage for the next seven.

It laid out the conclusion that the panel would come back to in every hearing: that Trump conspired to overturn his own defeat, taking actions that sparked the violent insurrection at the Capitol, when hundreds of his supporters beat police and broke through windows and doors to interrupt the certification of President Joe Biden’s victory.

“January 6th was the culmination of an attempted coup, a brazen attempt, as one rioter put it shortly after January 6th, to overthrow the government,” said Mississippi Rep. Bennie Thompson, the Democratic chairman of the panel. “The violence was no accident. It represents seeing Trump’s last stand, most desperate chance to halt the transfer of power.”

‘CARNAGE’ AT THE CAPITOL

Capitol Police Officer Caroline Edwards, one of two witnesses at the first hearing, described what she saw outside the Capitol on Jan. 6 as a “war scene.” As some Republicans, including Trump, have tried to downplay the violence of the insurrection, calling it “peaceful,” Edwards recalled the brutality she experienced on the front lines. She suffered a traumatic head injury that day as some of the first protesters barreled through the flimsy bike rack barriers that she and other officers were trying to hold.

“I couldn’t believe my eyes,” Edwards testified. “There were officers on the ground. You know, they were bleeding. They were throwing up. … It was carnage. It was chaos.”

The committee has used clips of its interview with former Attorney General Bill Barr in almost every hearing, showing the public over and over his definitive statements that the election was not stolen by Biden — and his description of Trump’s resistance as he told the president the truth.

At the second hearing, the panel showed a clip of Barr recalling how he told Trump to his face that the Justice Department had found no evidence of the widespread voter fraud that Trump was claiming. Barr said he thought Trump had become “detached from reality” if he really believed his own theories and said there was “never an indication of interest in what the actual facts were.”

One question going into the hearings was what Trump and Vice President Mike Pence talked about in a phone call the morning of Jan. 6. The conversation came after Trump had pressured his vice president for weeks to try and somehow object or delay as he presided over Biden’s certification. Pence firmly resisted, and would gavel down Trump’s defeat — and his own — in the early hours of Jan. 7, after rioters had been cleared from the Capitol.

While only Trump and Pence were on the Jan. 6 call, White House aides filled in some details at the committee’s third hearing by recounting what they heard Trump say on his end of the line.

“It was a different tone than I’d heard him take with the vice president before,” said Ivanka Trump.

Encouraged by Trump’s tweet, after the attack had started, that Pence “didn’t have the courage to do what should have been done,” rioters at the Capitol singled out the vice president. Many chanted “Hang Mike Pence!” as they moved through the building. Pence evacuated the Senate just minutes before the chamber was breached, and later was rushed to safety as rioters were just 40 feet away.

Greg Jacob, the president’s lawyer, testified at the third hearing and said he had not known they were that close.

Jacob said Secret Service agents wanted them to leave the building but Pence refused to get in the car. “The vice president didn’t want to take any chance” that the world would see him leaving the Capitol, Jacob said.

‘I WILL NOT BREAK MY OATH’

At the committee’s fourth hearing, state officials detailed the extraordinary pressure the president put on them to overturn their states’ legitimate and certified results. Rusty Bowers, Arizona’s House speaker, told the committee how Trump asked him directly to appoint alternate electors falsely stating that he had won the state of Arizona and not Biden.

Bowers detailed additional calls with Trump lawyer Rudy Giuliani. “I will not do it,” Bowers told him, adding: “You are asking me to do something against my oath, and I will not break my oath.”

Georgia election workers Wandrea “Shaye” Moss and her mother, Ruby Freeman, also testified before the panel in the fourth hearing, describing constant threats after Trump and his allies spread false rumors that they introduced suitcases of illegal ballots and committed other acts of election fraud. The Justice Department debunked those claims.

The two women said they had their lives upended by Trump’s false claims and his efforts to go after them personally. Through tears, Moss told lawmakers that she no longer leaves her house.

In videotaped testimony, Freeman said there is “nowhere I feel safe” after the harassment she experienced.

When his efforts to overturn his defeat failed in the courts and in the states, Trump turned his focus to the leadership of the Justice Department.

Richard Donoghue, the acting No. 2 at the time, testified about his resistance to entreaties by another department official, Jeffrey Clark, who was circulating a draft letter recommending that battleground states reconsider the election results. Trump at one point floated replacing then-acting Attorney General Jeffrey Rosen with Clark, but backed down after Donoghue and others threatened to resign.

“For the department to insert itself into the political process this way, I think would have had grave consequences for the country,” Donoghue testified. “It may very well have spiraled us into a constitutional crisis.”

‘THEY’RE NOT HERE TO HURT ME’

In a surprise sixth hearing, former White House aide Cassidy Hutchinson recounted some of Trump’s actions on Jan. 6, including his dismissive response when told that some in the crowd waiting for him to speak outside the White House were armed.

“I was in the vicinity of a conversation where I overheard the president say something to the effect of, ‘I don’t effing care that they have weapons,’” Hutchinson said. “’They’re not here to hurt me. Take the effin’ mags away. Let my people in. They can march to the Capitol from here.’”

Upset that the crowd didn’t appear larger, Trump told his aides to take the metal-detecting magnetometers away. In the coming hours, he would step on the stage and tell them to “fight like hell.”

Hutchinson also described Trump’s anger after security officials told him he couldn’t go to the U.S. Capitol with his supporters after he had told them he would. She said she was told that the president even grabbed the steering wheel in the presidential SUV when he was told he couldn’t go.

For the president to have visited the Capitol during Biden’s certification, and as his supporters descended on the building, would have been unprecedented.

At its seventh hearing, the committee painstakingly reconstructed a Dec. 18 meeting at the White House where outside advisers to Trump pushing election fraud claims clashed with White House lawyers and others who were telling him to give up the fight.

The six-hour meeting featured profanity, screaming and threats of fisticuffs, according to the participants, as Trump lawyer Sidney Powell and others threw out conspiracy theories, including that the Democrats were working with Venezuelans and that voting machines were hacked. Pat Cipollone, the top White House lawyer, testified that he kept asking for evidence, to no avail.

The final hearing focused on what Trump was doing for 187 minutes that afternoon, between his speech at the rally and when he finally released a video telling the rioters to go home at 4:17 p.m.

They showed that Trump was sitting at a dining room table near the Oval Office, watching Fox News coverage of the violence. But he made no calls for help — not to the Defense Department, the Homeland Security Department nor the attorney general — even as his aides repeatedly told him to call it off.

In the video released at 4:17 p.m., as some of the worst of the fighting was still happening down the street, Trump told rioters to go home but said they were “very special.”

The committee showed never-before-seen outtakes of a speech Trump released on Jan. 7 in which he condemned the violence and promised an orderly transition of power. But he bristled at one line in the prepared script, telling his daughter Ivanka Trump and others in the room, “I don’t want to say the election is over.”

Follow AP’s coverage of the Jan. 6 committee hearings at https://apnews.com/hub/capitol-siege.