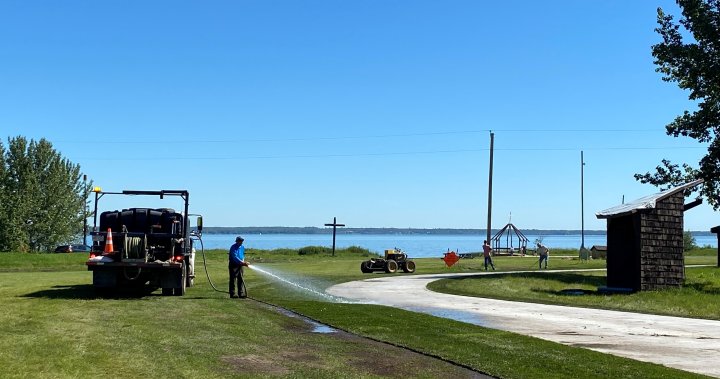 In just under two weeks, the small community of Lac St. Anne will be inundated with visitors from around the world.

July 26 is the annual gathering on the sacred shore of the lake which became a pilgrimage site in 1889.

The pilgrimage has grown to see about 40,000 people take part over the course of a week in pre-pandemic times.

This year, more than 100,000 people could attend as the Pope joins in the day as part of his reconciliation visit to Canada.

His visit will follow a mass at Commonwealth Stadium.

“But I think when everybody understands that there was an apology made and we can hopefully slowly move on and move on together, that it’ll be a better thing for, I think for Alberta, probably for Canada.”

The visit is expected to put tremendous pressure on the area.

Alberta Beach typically has a population of about 1,000 people. On sunny days, it will swell up to 5,000 but the Pope’s visit will be an entirely new level of attention.

Officials from multiple jurisdictions are meeting regularly to go over plans for the day.

At the pilgrimage site, new sod and a new sidewalk have been laid.

Range Road 40 is being repaved a year ahead of schedule. Other roads leading up to the sacred shore are also being improved.

On Tuesday, RCMP members could be seen on site taking part in a planning meeting. Audio visual staff were also present.

Police presence is expected to be increased in the area starting this weekend and stretching until after the Pope departs.

The Alberta Beach boat launch will be closed during the Pope’s visit so that police can use it — meaning they will have officers on the water, on the ground and in the air in their helicopter.

Multiple roads will also be closed to visitors.

There will be no access to the pilgrimage site through Alberta Beach from Sunset Point to the west.

Highway 633 — the main way to get to the area — is also expected to be closed to vehicles for at least part of the papal visit with only pedestrians and shuttles allowed.

A pass has been given to Alberta Beach residents to allow them to get in and out of the area with more ease. However, they are being told not to expect to park in the community or travel easily on that day.

“Most of our local residents will probably stay in their homes during the week,” said Mayor Duncan. “Those who have to work are a little bit nervous about getting in and out of the village.”

Free tickets will be necessary to get onto the pilgrimage site. Those are expected to be available soon though they will be in limited quantities.

Anyone wanting to be in the area is being told to plan to come early and be ready to walk quite a distance.

“We want you to come here, we just don’t have enough room,” Blakeman said.

“The Pope’s the only guy to out sell Garth Brooks.”

Blakeman is glad to see work being done on the pilgrimage site. It is a National Historic site and he said he believes it’s past time the federal government helped improve the area.

He hopes the work done will benefit the area for years to come.

“I think because it’ll be broadcast nationally, and not only nationally but across the world, that might draw some more people and give everybody a better understanding of what’s happened here over the years and what truth and reconciliation is.”

Officials are expected to release more details on road closures, tickets and shuttles in the coming days.