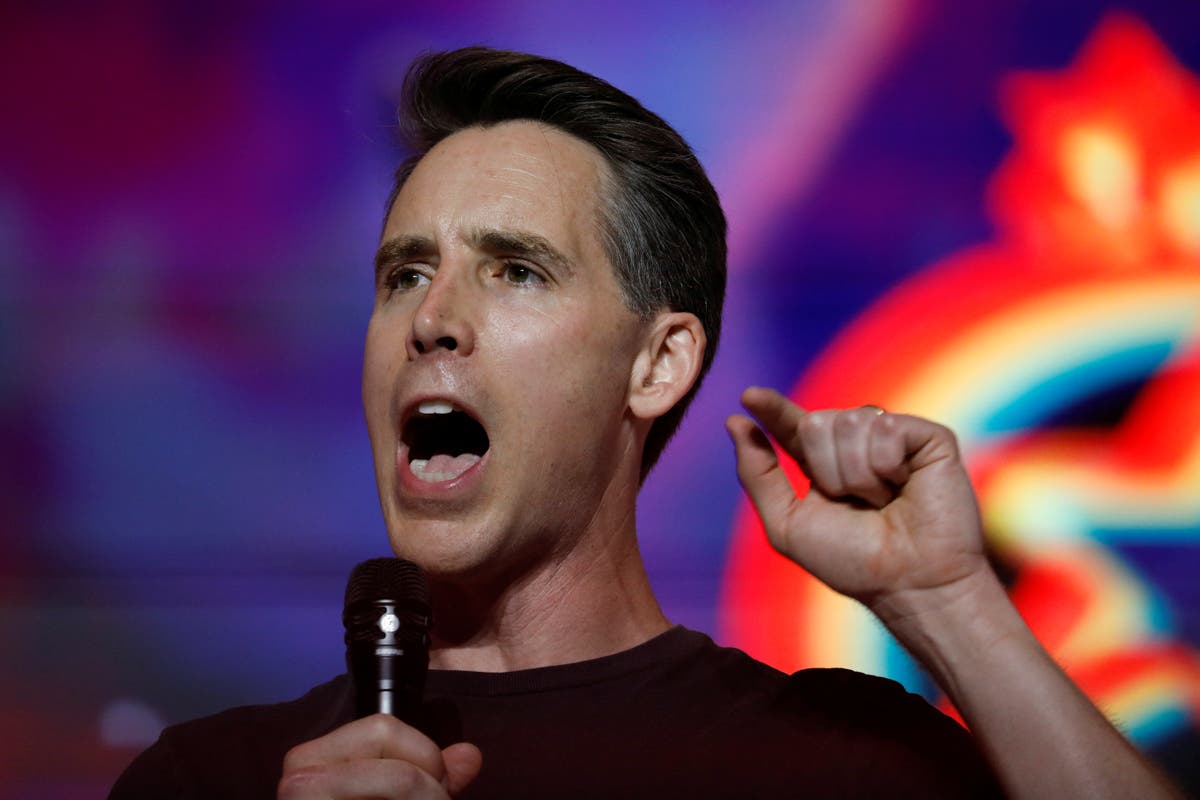 In his first public remarks following a wave of criticism over surveillance footage that showed him fleeing the US Capitol on 6 January 2021 after raising his first in solidarity with the mob that would later break into the building, Josh Hawley says he “is not backing down”.

The Missouri Republican was the first US senator to announce his objection to the chamber’s certification of the Electoral College vote count, triggering debate in Congress and stoking a mob fuelled by Donald Trump’s baseless narrative that the 2020 presidential election was “stolen” from him.

Several House Republicans, pledging their loyalty to Mr Trump, announced that they would object to the slate of electors in Congress on 6 January, but their objections need both a member of the House and Senate to move forward. Mr Hawley – amplifying spurious claims that Pennsylvania’s “failed to follow” its election laws – defied Senate GOP Leader Mitch McConnell and announced that he would also object.

As he entered the Capitol that day, Mr Hawley – in an image that his campaign continues to use for fundraising – raised his first to the crowd, signalling his support. But in footage released by the House select committee investigating the attack, aired during a primetime hearing on 21 July, Mr Hawley can be seen running away from the rioters he greeted hours earlier, according to the committee.

“And I just want to say to all of those liberals out there and the liberal media: just in case you haven’t gotten the message yet: I do not regret it, and I am not backing down,” he told a crowd at Turning Point USA’s Student Action Summit in Tampa, Florida on 22 July.

During Thursday’s hearing, Democratic US Rep Elaine Luria shared images of Mr Hawley raising his fist towards the mob as he entered the Capitol for a joint session of Congress on 6 January, 2021.

“As you can see in this photo, he raised his fist in solidarity with the protesters already amassing at the security gates,” she said.

The committee then played video footage appearing to show Mr Hawley running at a brisk pace through the Capitol building, then jogging down some stairs.

The hearing room – full of reporters, members of Congress and staff, appearing surprised with the video in contrast with Mr Hawley’s ongoing and well-publicised defense of his “fist” moment – erupted in laughter.

Ms Luria said members of the US Capitol Police testified to the committee that Mr Hawley’s actions had “riled up” the crowd that day.

“We spoke with a Capitol police officer who was out there at the time,” she said. “She told us that just Senator Hawley’s gesture riled up the crowd. And it bothered her greatly because he was doing it in a safe space, protected by the officers and the barriers.”

She added: “Think about what we’ve seen … Undeniable violence at the Capitol. The vice president being evacuated to safety by the Secret Service. Senators running through the hallways of the Senate to get away from the mob.”

Earlier this week, a proposal from Republican Senator Susan Collins and Democratic Senator Joe Manchin – joined by more than a dozen other senators from both parties, after months of planning – would update an archaic 19th century law that Mr Trump and his allies sought to exploit by pressuring Mike Pence to block the certification process.

The Electoral Count Reform Act would clarify the vice president’s role presiding over the Electoral College vote count and raise the threshold for members of Congress to object.

The measure clarifies that the vice president has a “solely ministerial” in presiding over the vote.