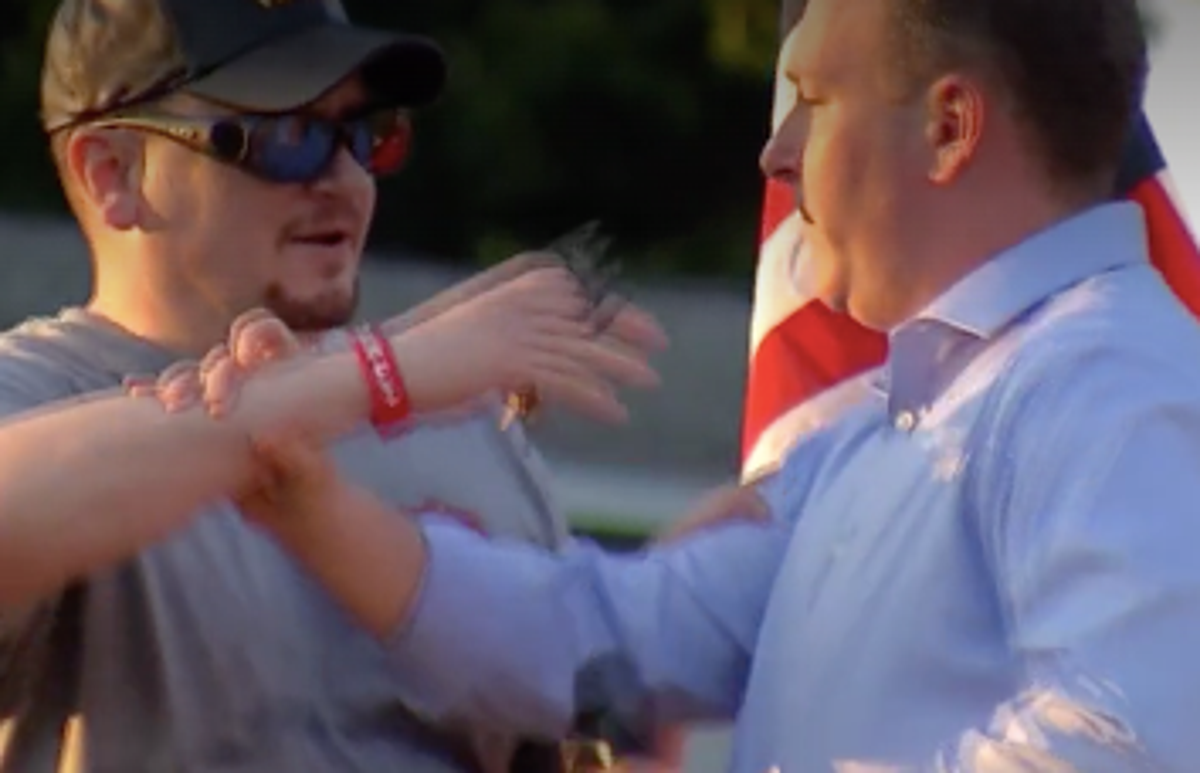 The man who attacked New York Republican gubernatorial candidate Lee Zeldin during a campaign stop near Rochester on Thursday evening was arrested on Saturday on a federal assault charge, reports say.

David Jakubonis is set to make a court appearance in front of US Magistrate Judge Marian Payson later in the day according to ABC7.

FBI, New York State police officers, and the Monroe County Sheriff’s Office personnel took him into custody before midday, according to The Daily Mail.

A motorcade of six vehicles arrived at the apartment complex in Fairport, New York, where Mr Jakubonis lives, and after a short time departed with him in custody.

He was previously charged at the state level with attempted assault in Monroe County, but was already out of jail by Friday morning.

On Thursday night he was wrestled to the ground by bystanders as he confronted Mr Zeldin at a campaign event for his campaign against incumbent New York Governor Kathy Hochul.

Mr Zeldin was not harmed in the incident, which occurred as he was speaking outside a Veterans of Foreign Wars post in Fairport.

“Someone tried to stab me on stage during this evening’s rally, but fortunately, I was able to grab his wrist and stop him for a few moments until others tackled him,” the Republican representative said on Twitter, thanking people for reaching out.

Mr Zeldin was addressing a crowd when he was interrupted by an audience member who walked up close to him and said, “Okay, you’re done”, according to a video of the incident.

The man had a pointed weapon with him, an onlooker in the video is heard saying, and dragged Mr Zeldin to the ground before being subdued by several other men. The members of the audience managed to disarm the man after a brief tussle until authorities arrived and detained the attacker.

Mr Zeldin was on his “Unite to Fire Hochul” bus tour stop in Perinton, New York.

“Far more must be done to make New York safe again. This is very much getting out of hand in this state. Unfortunately, Congressman Zeldin is just the latest New Yorker whose life has been affected by the out-of-control crime and violence in New York. This needs to stop! Thankfully, we still have exceptional men and women in law enforcement answering the call to protect our streets.”

In a statement, Governor Hochul condemned the attack and said she was “relieved to hear that Congressman Zeldin was not injured and that the suspect is in custody.”

President Joe Biden also released a statement on the incident.“I condemn the attack on Congressman Zeldin in the strongest terms,” he said. “As I’ve said before, violence has absolutely no place in our society or our politics. I am especially grateful for the courage of those who immediately intervened, and that he is unharmed and was able to continue his speech. I also want to thank the law enforcement officers who quickly took action and are investigating this attack that defies our fundamental democratic values.”

Mr Zeldin has questioned why Mr Jakubonis was released from his initial custody at 3 am on Friday morning — a time of the night when there was no access to mental health resources.He said he should have been held until the morning when he could receive help.

The New York Times reports that Monroe County district attorney — Sandra Doorley, co-chair of Mr Zeldin’s campaign — could have chosen to charge Mr Jakubonis with a violent felony that would’ve required bail and pushed to keep him locked up, but chose not to.

A spokesperson for Ms Doorley said she would recuse herself from the case.