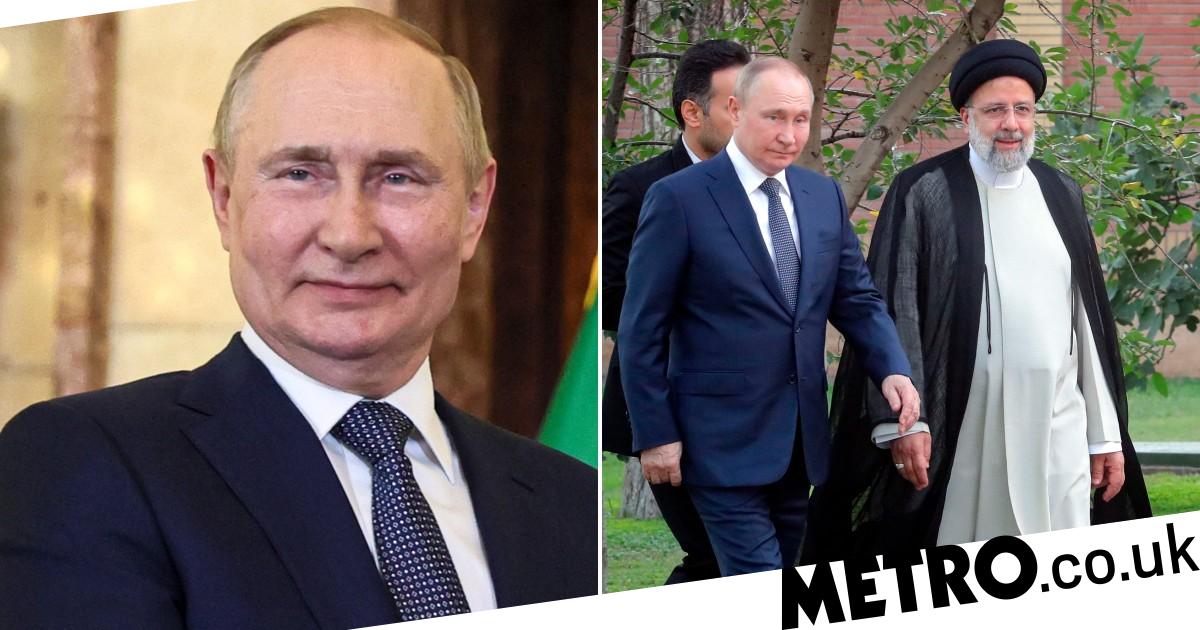 Vladimir Putin may have used a body double during his visit to Tehran, according to the head of Ukrainian military intelligence.

The Russian leader looked awkward as he came down the steps of his flying Kremlin presidential plane, says Major-General Kyrylo Budanov.

He added that Putin seemed to move unusually quickly on his trip to the Iranian capital, and looked more alert than in previous public appearances.

Another unusual display was when the president appeared animated while greeting guests, rather than his usual neutral face.

Talking about his suspicions on Ukraine’s 1+1 news channel, Budanov said: ‘I will only hint.

‘Please look at the moment of Putin’s exit from the plane. Is it Putin at all?’

Ukrainian reports said Budanov believed ‘a Putin lookalike flew to Tehran to meet with the presidents of Iran and Turkey’.

During his visit, he met Turkey’s President Recep Tayyip Erdoğan, as well as Iran’s leadership.

While in Erdoğan’s presence, Putin is accused of looking visibly uncomfortable and could be seen making strange facial expressions.

However at the time, Ukraine did not suggest he was a body double.

During the visit official Anton Gerashchenko posted on Telegram: ‘Erdogan made Putin wait during the meeting in Tehran.

‘The whole spectrum of emotions of the humiliated and insulted Führer is on his face.

‘The bunker is indeed the best place to stay with such a face.’

Ukrainian news agency UNIAN commented: ‘The dwarf doesn’t like to be disrespected.’

Putin two years ago admitted that officials had considered using doubles, but he claimed the idea was rejected. He added: ‘I discarded the idea of any doubles.’

He was advised in the early 2000s when Russia was hit by terrorist attacks that a lookalike should take his place at events where the head of state might be at risk, he said.

‘This was during the toughest time of our war against terrorism,’ he said.

Meanwhile, a Russian source expert on Putin has strongly disputed a CIA claim that the Kremlin leader is ‘too healthy’ and showing no evidence of multiple medical problems.

There are also claims Putin is suffering from serious illnesses including cancer, Parkinson’s disease and a schizoaffective disorder.