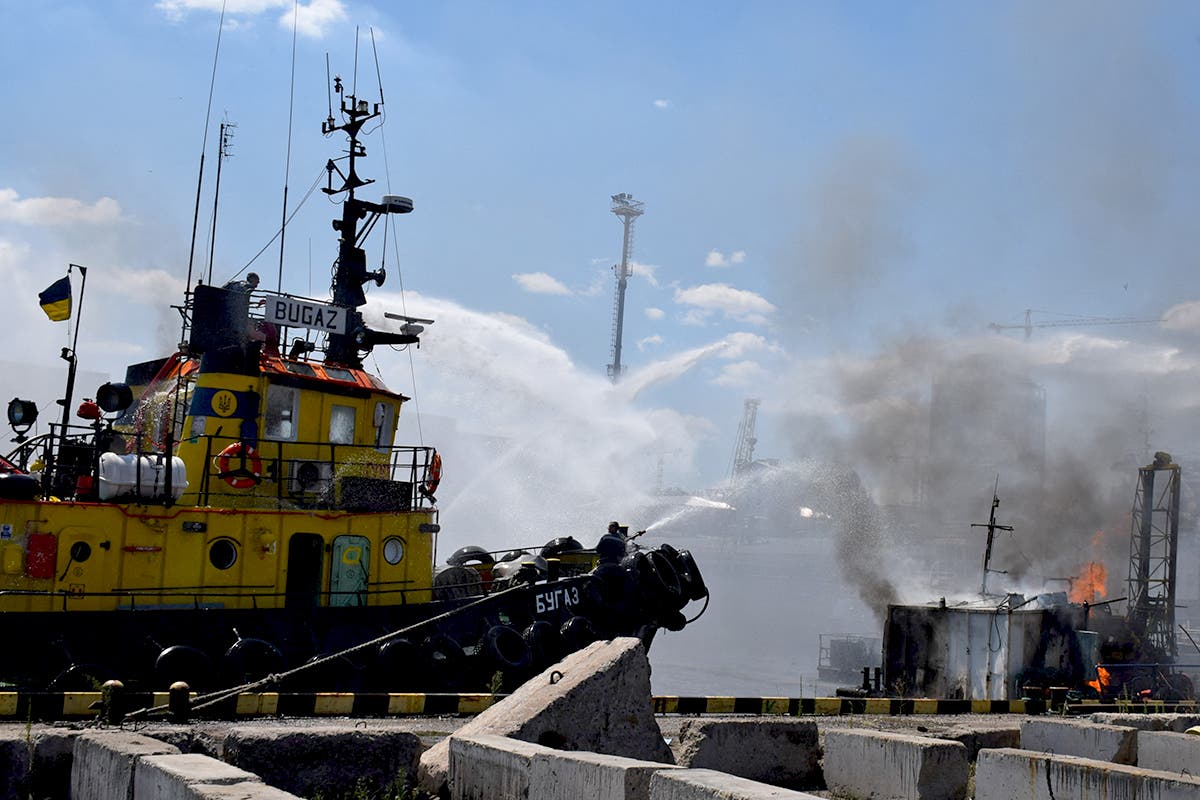 Volodymyr Zelensky slammed Russia for carrying out a missile attack on Ukraine’s Odesa port on Saturday, calling it an act of blatant “barbarism”, and cast doubts over whether Moscow will honour a freshly-signed grain deal critical to the mounting food crisis globally.

“Today’s Russian missile attack on Odesa, on our port, is a cynical one, and it was also a blow to the political positions of Russia itself,” the Ukrainian president said in his nightly address late on Saturday. “If anyone in the world could still say that some kind of dialogue with Russia, some kind of agreements are needed, see what is happening.”

The Russian missiles, he said, have destroyed the very possibility for such statements from Moscow aimed at reassuring constructive global agreements.

“And we see the absolute unanimity of the world’s reaction to this strike. The occupiers can no longer deceive anyone,” he said.

Pointing to the damage caused by the strike, Mr Zelensky said that the building of the Odesa Art Museum was hit.

“The missiles hit very close to historical objects of Odesa – something that is an asset not only for Ukrainian culture, but also for the culture of Europe,” he said. “This apparent Russian barbarism brings us even closer to obtaining the very weapons we need for our victory.”

The missiles were reportedly fired from Russian warships in the Black Sea near Crimea, Ukrainian air force spokesperson Yuriy Ignat said. The grain stock in the storage area was not hit and remains unimpacted.

Odesa regional governor Maksym Marchenko said the strike resulted in damage to the port’s infrastructure. “Unfortunately there are wounded,” he said.

Visuals released by Ukraine showed firefighters putting out a fire on an unidentified boat moored near a tug boat.

Russian officials have denied responsibility for the attack and told Turkey that the Kremlin had “nothing to do” with the strikes.

Additionally, Russia has not mentioned anything about the strikes in Odesa in any of its defence ministry statements or the military’s evening summary.

The missile strikes have been widely condemned by the United Nations, the European Union, the United States, Britain, Germany and Italy.

The Ukrainian foreign ministry denounced the strikes as a “spit in the face” of Turkey and the United Nations, who had brokered the deal to allow grain exports to resume from Odesa.

However, Kyiv, which has been gripped in the quagmire of war for 150 days now, has pushed for making efforts on Sunday to resume grain exports from Odesa and other Black Sea ports.

Ukrainian infrastructure minister Oleksandr Kubrakov said that the battered country will “continue technical preparations for the launch of exports of agricultural products from our ports”.

According to UN officials, who along with Turkey brokered the deal between Ukraine and Russia, the agreement will help restore grain shipments from three reopened ports to pre-war levels of five million tonnes per month.

Russia’s invasion of Ukraine in February has left millions at risk of hunger. It has also caused food prices to soar as much of the grain remains stuck in Ukraine.

Collectively, Russia and Ukraine are responsible for more than a quarter of global wheat exports and for around 80 per cent of the world’s supply of sunflower oil.

Along with the strikes on Odesa, Russia’s military fired a barrage of missiles on Saturday at an airfield and a railway facility in central Ukraine, killing at least three people, while Ukrainian forces struck a river crossing in the Russian-occupied southern region of Kherson.

The attacks on key infrastructure marked new attempts by each of the warring parties to tip the scales of the grinding conflict in their favour.