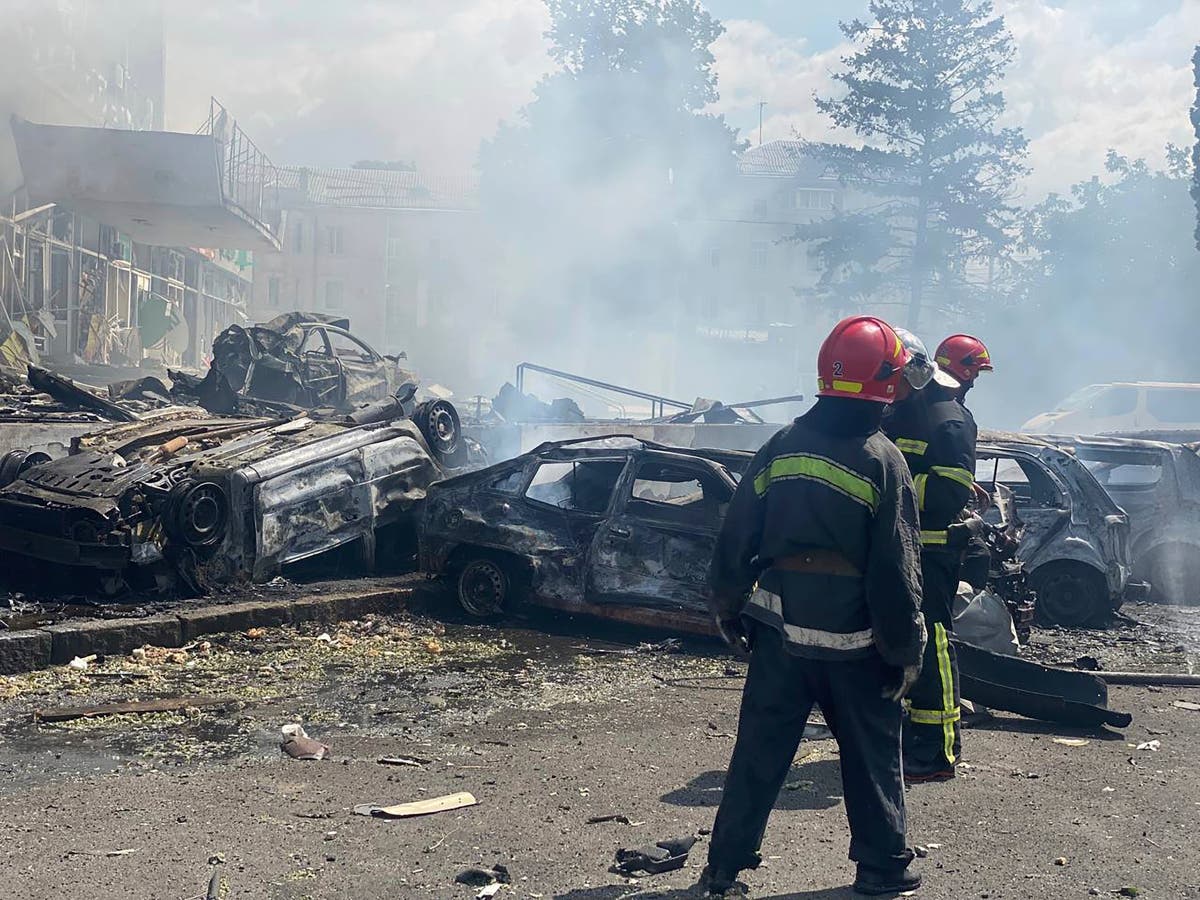 At least 17 people, including a child, have been killed in a rare Russian strike on the central city of Vinnytsia, Ukraine’s State Emergency Services have said.

Another 90 people were injured said officials.

He added the firefighters were at the scene fighting a blaze which had set around 50 vehicles on fire.

“There are wounded and dead, among them a small child,” Ukrainian President Volodymyr Zelensky wrote on the Telegram messaging app after the attack.

He added: ““Every day Russia is destroying the civilian population, killing Ukrainian children, directing missiles at civilian objects. What is this, if not an open act of terrorism?”

Mr Zelensky suggested the attack was deliberately aimed at civilians.

Footage reportedly taken by residents at the scene showed plumes of smoke towering above the building which was hit as ambulances sound in the background.

The governor of the Vinnytsia region, Serhiy Borzov, said Ukrainian air defence systems shot down another four missiles over the area.

Vinnytsia had, until now, escaped the worst of Russia’s bombardment, and has become a hub for humanitarian aid as it lies on the crossroads of the east and the west of the country.

The city is located some 270 kilometres (167 miles) south-west of the capital Kyiv.

The strike happened at the same time as government officials from about 40 countries met in The Hague to discuss co-ordinating efforts to investigate and prosecute potential war crimes in Ukraine.

Before the missiles hit Vinnytsia, the president’s office reported the deaths of five civilians and the wounding of another eight in Russian attacks over the past 24 hours.

One person was wounded when a missile damaged several buildings in the southern city of Mykolaiv early on Thursday, Ukrainian authorities said.

A missile attack on Wednesday killed at least five people in the city.

The city of Lysychansk, the last major stronghold of Ukrainian resistance in Luhansk, fell to Russian forces at the beginning of the month.

Luhansk and Donetsk together make up the Donbas, a mostly Russian-speaking region of steel factories, mines and other industries.

“We are urging civilians to leave the region, where electricity, water and gas are in short supply after the Russian shelling,” Mr Kyrylenko said in televised remarks.

“The fighting is intensifying, and people should stop risking their lives and leave the region.”

The British Ministry of Defence (MoD) said on Thursday that despite continued shelling in the Donbas region, Russian forces have not made major territorial gains in recent days.

“The ageing vehicles, weapons and Soviet-era tactics used by Russian forces do not lend themselves to quickly regaining or building momentum unless used in overwhelming mass – which Russia is currently unable to bring to bear,” the MoD said.