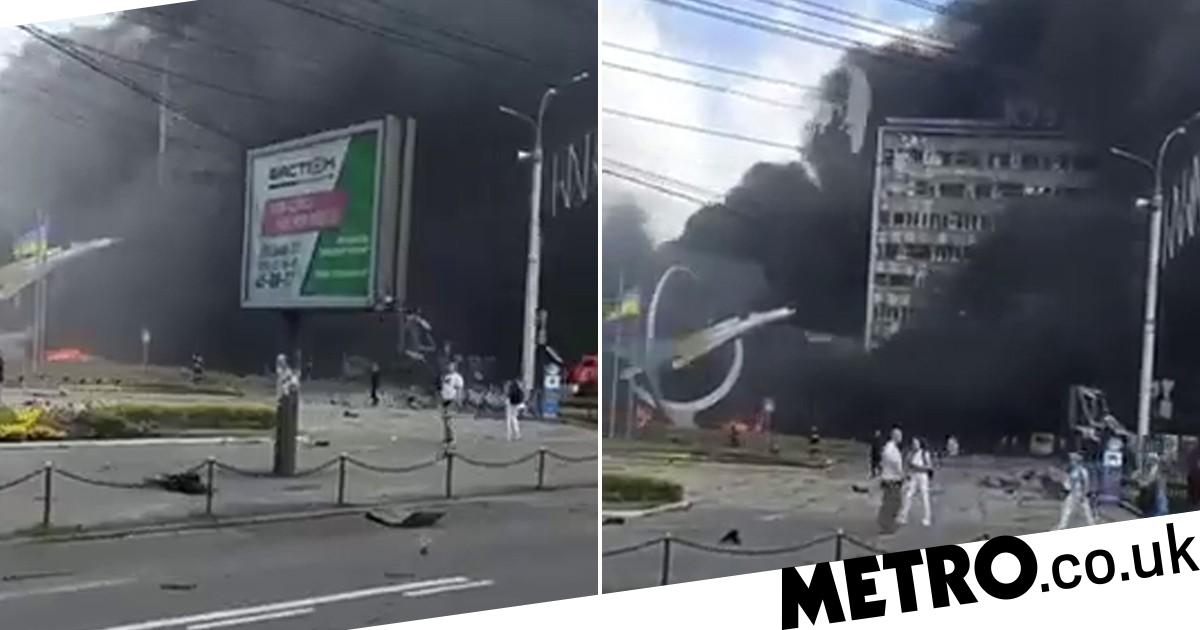 A small child has died following a Russian airstrike on a maternity ward in the western Ukrainian city of Vinnytsia this morning.

So far 12 people have been killed while 25 have been injured in the rocket attack, which also hit a shopping mall, authorities say.

About 50 vehicles were set ablaze as the fire spread to a car park, and footage taken in the aftermath shows thick black smoke filling the sky.

‘There are wounded and dead, among them a small child,’ Ukrainian President Volodymyr Zelensky wrote on the Telegram messaging app.

He added: ‘What is this, if not an open act of terrorism?’

Ever since Vladimir Putin launched his invasion on February 24, the Kremlin has continued accusations of war crimes or deliberate attacks on civilian targets.

But countless images of burnt out residential blocks, and air strikes on buildings sheltering civilians, paint a very different picture.

Ukraine says it is investigating more than 21,000 war crimes by Russian forces, as troops are accused of raping, murdering and torturing civilians.

The world was left in shock as grim images emerged of dead Ukrainians, in the Kyiv suburb of Bucha and elsewhere, piled up in mass graves with their hands tied behind their backs.

In May the first Russian soldier to be convicted for recent war crimes in Ukraine was jailed for life, after shooting an unarmed man with an AK-47 through an open car window.

The chief prosecutor of the International Criminal Court (ICC) has called for an international ‘overarching strategy’ to co-ordinate efforts to bring perpetrators of war crimes in Ukraine to justice.

‘The simple truth is that, as we speak, children, women and men, the young and the old, are living in terror,’ ICC prosecutor Karim Khan said as he opened a Ukraine Accountability Conference in The Hague.

‘They’re suffering in Ukraine and in so many different parts of the world. Grieving about what they lost yesterday, holding their breath about what they could lose today, and what tomorrow can bring. At a time like this, the law cannot be a spectator.’