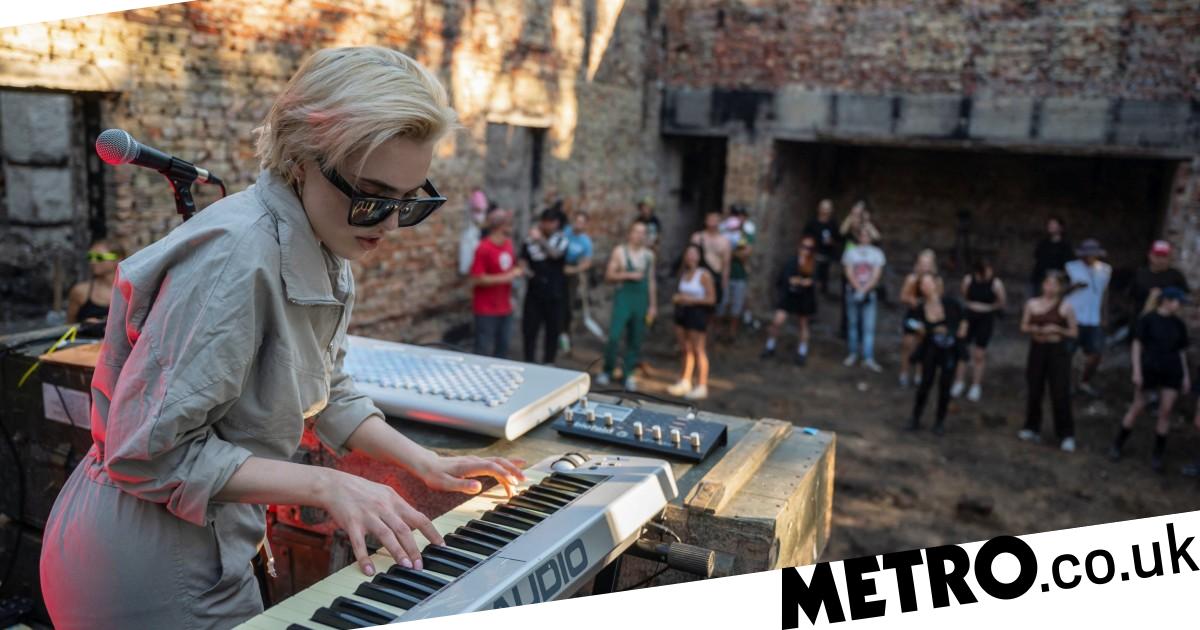 After five months of Russian attacks, Ukraine is not the first place you would expect to see a techno party in full swing.

But proving the Ukrainian spirit is ‘indomitable’, 200 young people turned up in the northern village of Yahidne to do just that.

DJ Oleksandr Buchinskiy mounted his turntables on a stack of ammunition boxes, turning up some house bangers, while volunteers removed debris from a culture hall that was destroyed in March.

Shovels in hand, they tossed piles of rubble onto a tractor’s loader – a small yet important way of contributing towards the mammoth recovery effort.

‘Volunteering is my lifestyle now,’ said Tania Burianova, 26, an organiser for the ‘clean-up raves’.

‘I like electronic music and I used to party. But now it’s wartime and we want to help, and we’re doing it with music.

‘We miss (parties) and we want to come back to normal life, but our normal life now is volunteering.’

Ms Burianova said the clean-up raves bring together those who have lost their nightclub community during the war, helping them regain a sense of normality.

Yahidne was among three villages in the Chenihiv area liberated by the Ukrainian military in the beginning of April.

According to the Prosecutor General’s Office, most of its 350 residents were kept in a 197-square-metre school basement, where Russian troops had set up headquarters in March.

The elderly were among the hostages, along with 77 children and five babies.

Due to a lack of sufficient space, sanitation, fresh air, food, and water, at least 10 elderly people died.

Resident Nina, who spent those awful weeks in the basement before the Russian troops withdrew, said she was grateful to see young people coming together to help the village recover.

‘They already repaired our windows, doors and entrances,’ the 68-year-old said.

‘We couldn’t do it ourselves with our salaries or pensions. I’m thankful that they helped us.’

Most of the volunteers were in their 20s and 30s and came from Kyiv, about two hours’ drive away.

But others came from the western city of Lviv and also nearby Chernihiv, which have also suffered heavy bombardment.

Some foreign volunteers arrived from Portugal, the United States, Germany and elsewhere.

Their next project is in the nearby town of Lukashivka, where the group will construct 12 houses for people whose homes have been destroyed.