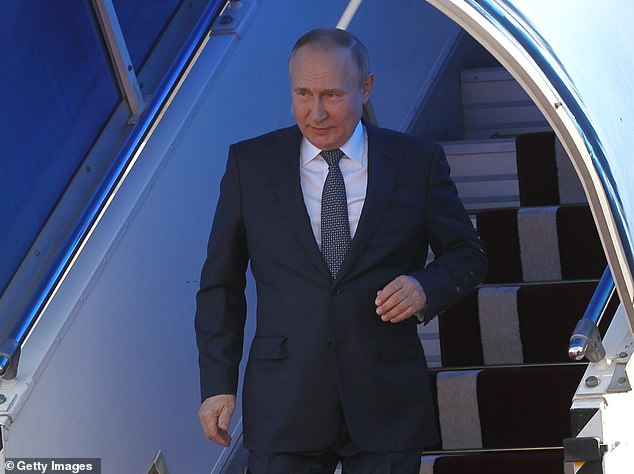 Vladimir Putin suffered a late-night health scare over the weekend, according to a Telegram channel which claims to monitor the Russian leader’s health.

The 69-year-old suffered from ‘severe nausea’ overnight Friday into Saturday with doctors rushed to his bedside for around three hours, General SVR channel said.

Putin has now recovered, it claimed, but may be replaced by a body double during meetings this week or use ‘deep fake’ technology to stage television appearances.

It comes just days after Ukraine’s spy chief suggested that Putin had been replaced by a decoy during a state visit to Iran.

Vladimir Putin suffered ‘severe nausea’ around 1am Saturday and was treated by doctors for three hours, according to a Telegram channel which claims to track his health

Kyrylo Budanov, head of Ukraine’s military intelligence agency, raised suspicions after reviewing footage of the Russian leader getting off a plane in Tehran Tuesday.

‘Please look at the moment of Putin’s exit from the plane. Is it Putin at all?’ he said on Ukrainian television.

General SVR has previously claimed that Putin is being secretly treated for cancer and that top adviser Nikolai Patrushev regularly steps in for him during surgeries.

None of the channel’s claims have been verified, but Putin would not be the first Russian leader to use a decoy if it can be proved.

Josef Stalin is said to have used multiple body-doubles while leader of the Soviet Union, two of whom have since come forward to speak about the experience.

One, known only as ‘Rashid’, claimed he was one of several men employed by the KGB to fill in for Stalin during public appearances where he was afraid of being assassinated, or to give the public the impression he was healthy when he was ill.

Felix Dadaev then came forward in 2008 to claim he was another of those doubles, saying Putin’s regime had granted him permission to tell his story via state media. 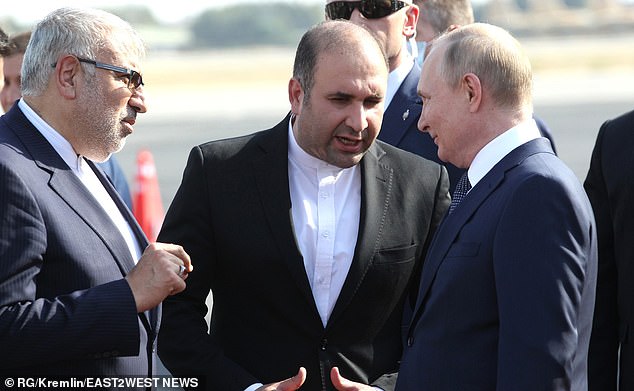 Putin may be replaced by a body double this week, it is claimed, after Ukraine raise suspicions he used a decoy on a visit to Iran last week (pictured above)

Leonid Brezhnev, another Soviet leader, was also said to have used doubles.

Putin himself admitted he considered the use of decoys for protection during the Chechen War, but claims he dismissed the idea and it was never carried out.

General SVR, which claims to be run by a former officer from Russia’s Foreign Intelligence Service, said today: ‘Putin on the night of Friday July 22 to Saturday July 23 needed urgent medical care.

‘At about 1am, the medical workers on duty at [his] residence were summoned to the president. Putin complained of severe nausea.

‘Twenty minutes later, an additional team of doctors with the president’s attending physicians was called.

‘It is known that doctors provided assistance and were near Putin for three hours, and after the president’s condition improved, they left his chambers.’

It claimed a decision was made that in some events this week ‘he will be replaced by a double’. 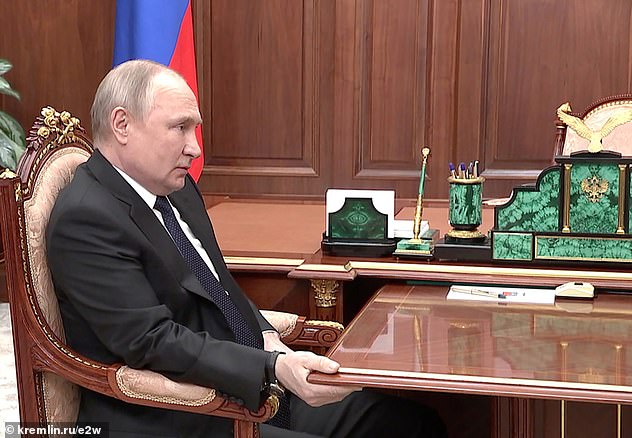 Frequent rumours about Putin’s health include that he is suffering cancer or Parkinson’s, while footage and images have shown him looking unwell (gripping a table, above)

Additionally ‘deepfake technology’ could be used to show meetings involving Putin that were not – in fact – in real time.

Political scientist Valery Solovey, who has long claimed the Russian leader is ailing, said: ‘The Americans, the CIA particularly, have information on the real state of health of the Russian president.

‘They definitely know that he has serious troubles, including mental ones.’

British MI6 director Richard Moore later added: ‘There is no evidence that Putin is suffering from serious illness.’

Solovey, a former professor at Moscow prestigious Institute of International Relations [MGIMO], suggested that the ‘too healthy’ comment was made because the US is in behind the scenes negotiations with Russia.

Solovey countered: ‘The Putin’s health topic is one of the [most] central in Russian policy discussions.’

He claimed the denials of medical issues ‘only reinforce suspicions that there is some problem’. ‘[When] Putin shows up, what do we see?

‘A man who limps, a man with dark spots, a man who has to interrupt meetings for ostensible ‘consultations’.

‘In reality, he needs medical assistance at that moment…

‘People make conclusions based on what they see.

‘TV is a big liar, but it becomes more difficult to hide the real state of affairs.’

Solovey, like channel General SVR, has claimed previously that Putin is suffering from serious illnesses including cancer, Parkinson’s disease and a schizoaffective disorder.