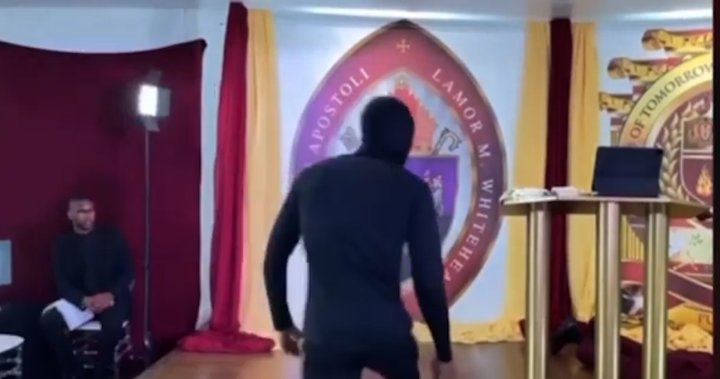 Armed robbers made off with around US$400,000 worth of jewelry after storming into a church during a live-streamed service and shaking down the bishop and his wife, police said.

Bishop Lamor Whitehead was about 10 minutes into his sermon when three gunmen entered the Leaders of Tomorrow International Ministries church in Brooklyn, N.Y., at around 11:15 a.m. and “displayed firearms and demanded property,” according to the New York Police Department.

The livestream of the incident shows the moment Whitehead noticed the men entering the church and dropped to the ground behind his lectern.

“As I got down, one went to my wife and took all her jewelry and had the gun in front of my eight-month-old baby’s face. Took off my bishop’s ring, my wedding band and took off my bishop’s chain, and then I had chains underneath my robe and he started tapping my neck to see if anything else. So that means they knew. They watched and they knew that I had other jewelry,” he recounted.

The church livestream showed a masked man get up on stage and point a gun at the pastor.

What the livestream didn’t show, Whitehead told CBS, is the around 100 parishioners who were there for the Sunday service. The pastor said that dozens of men, women, and children all dropped to the floor in silence.

“They had guns on my deacons that was at the door,” Whitehead added.

After taking around $400,000 worth of jewelry, the armed assailants took off in a white Mercedes-Benz, according to police.

Whitehead said that authorities have the licence plate of the getaway vehicle and witnesses saw the men change clothes outside.

“These men, they need to turn themselves in,” Whitehead told CBS. “I forgive you and I’m praying for you, and I hope that God deliver you from the mindset of who you are at this time.”

In a video posted to his Instagram, Whitehead said he hoped the robbers would turn themselves in, lamenting that many in his congregation have been left “traumatized.”

“The women and children that was in my church, my daughter, she’s traumatized right now. She’s not even talking,” he said.

The bishop also spoke about comments and news articles that described him as “flashy” for wearing expensive jewelry during his sermons.

Whitehead was in the news earlier this year when he said he was trying to negotiate the surrender of Andrew Abdullah, a 25-year-old accused of shooting a Goldman Sachs employee on a New York City subway.

Abdullah was arrested by police separately, according to NBC News.

Whitehead said the media attention he received in connection with the case may have contributed to his church being targeted.

Police said no one was injured during the Sunday morning robbery.

A spokesperson for the mayor said of the incident, “No one in this city should be the victim of armed robbery, let alone our faith leaders and congregants worshiping in a House of God. The NYPD is investigating this crime and will work tirelessly to bring the criminals involved to justice.”