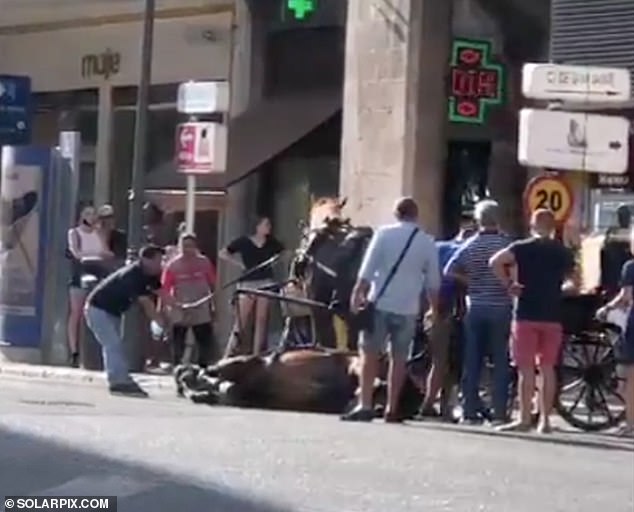 This is the horrifying moment a horse collapses while pulling a carriage full of tourists in Majorca amid searing temperatures.

Horrified onlookers filmed the scene in the Majorcan capital of Palma as they urged the driver to give the distressed horse water and encouraged the holidaymakers to get out of their seats.

The horse collapsed on Saturday afternoon in the Juan Carlos I Square in Palma after enduring temperatures of 40C (104F).

The leader of a local animal-rights party said he would be presenting an official complaint today about the incident.

Guillermo Amengual, president of Progreso en Verde which says horse-drawn carriage rides should be abolished because they represent animal exploitation, told local media: ‘It could have been heatstroke or the result of the animal not being suitable to be used in this way because of its age or other factors.

‘We’re going to denounce this because it’s the third time something similar has happened in the last two months and we have to get to the bottom of what’s happened.’

Footage of the drama showed a man thought to be the horse’s owner trying to yank it up as the second animal pulling the carriage watched on along with the three people still sat in the carriage.

One concerned woman who approached them could be overheard saying: ‘How terrible! The poor horse. And the people in the back staying where they are instead of getting out. What a spectacle.’

The Spanish-speaking woman ended up approaching the tourists and telling them to get down as others walked up to the carriage driver and said: ‘Water. Give it water.’

The animal ended up getting back on its feet although it is not known if it continued taking its passengers on a visit of the city. 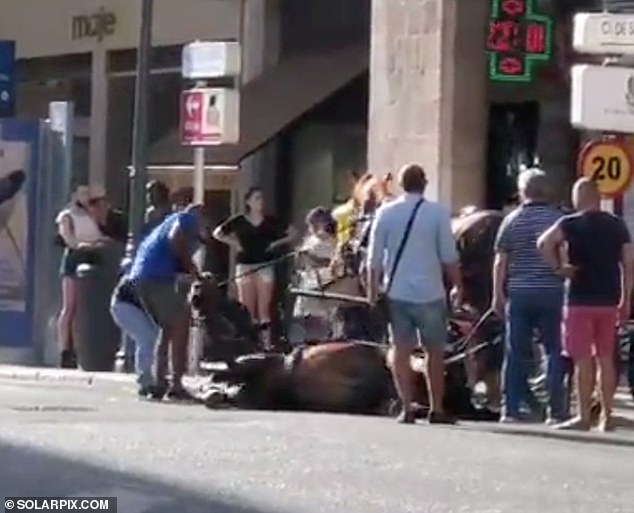 Locals and animal lovers reacted with fury after seeing footage of the incident, posted online alongside the caption: ‘Horse collapses after enduring temperatures of 40 degree Celsius.

‘The owner scoffs and the tourists refuse to get down. The 21st century.’

One said: ‘I feel true shame being from a city that year after year allows this animal cruelty to continue.

‘City Hall should put an end to this savagery.’

Another added: ‘Something needs to be done because this can’t be allowed. It’s repugnant.’

Palma City Hall has yet to respond to the latest incident, which comes a month and a half after another horse ended up on the floor a short walk away. 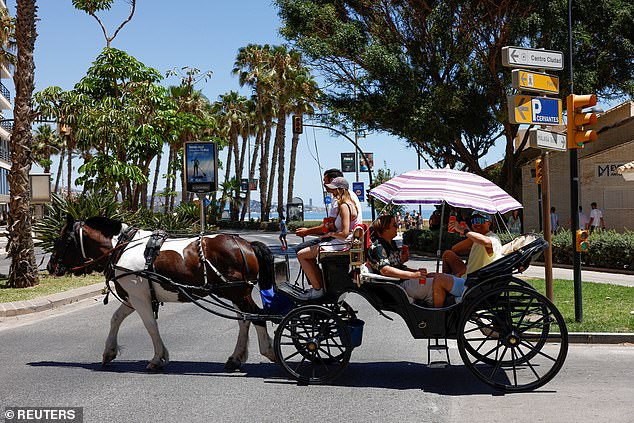 A coachman guides a horse-drawn carriage with tourists on a hot summer day in Malaga, Spain (file image)

Local politicians said afterwards it had been frightened by the noise coming from a lorry that was being unloaded nearby and fell after catching one of its hooves in a gutter.

Witnesses rubbished the council’s version of events at the time, insisting it had collapsed because it was exhausted.

At the start of June local police stopped a carriage which was being pulled by an elderly horse which was limping and shouldn’t have been working.

It emerged recently Palma City Hall was considering replacing the horses with an ‘electric alternative.’

Earlier this month Progreso en Verde said the animals were still being put to work in breach of new regulations prohibiting their use during high temperature alerts.