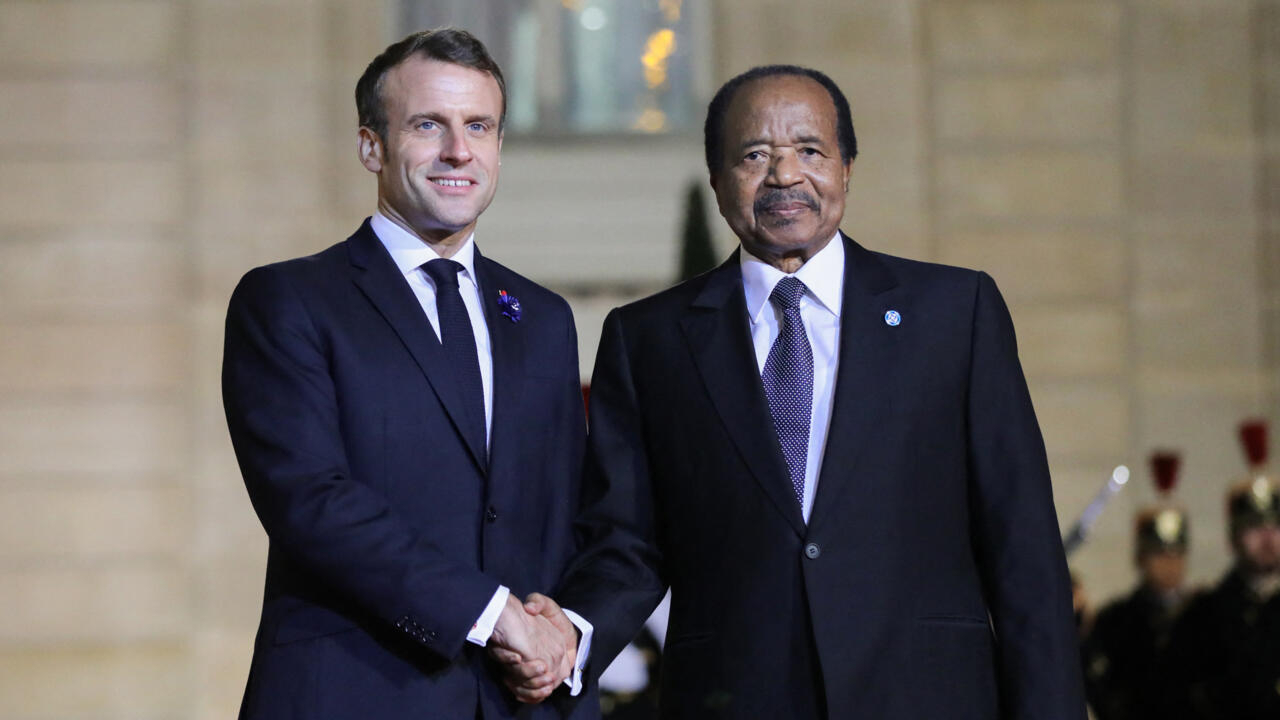 Emmanuel Macron went to Cameroon on Monday to kick off an African tour that will also take the French president to Benin and Guinea-Bissau. Macron’s trip focuses on food security, French investments and governance. The latter is a fraught question ahead of his meeting with 89-year-old Cameroonian President Paul Biya, who has been in power for four decades as the country braces for an uncertain succession.

Macron’s trip marks a new stage in the recently re-elected French president’s African policy, after his first term was dominated by the fight against terrorism in the Sahel and burgeoning ties with Anglophone African countries such as Ghana.

The president starts his tour in Cameroon’s capital Yaoundé on Tuesday, where Biya will host him for talks. The conversation is set to focus on co-operation on agriculture to help tackle the food crisis besetting the developing world, the fight against terrorism – and governance and rule of law; a sensitive subject that has already been the topic of heated debate between the two leaders.

Biya returned to office for a seventh term in October 2018, with official tallies giving him a landslide victory over his opponent Maurice Kamto. The opposition candidate and many of his supporters were arrested in January 2019 – and only released after nine months of detention – after contesting the result in the streets. Beneath the surface, Macron and Biya have had several contentious discussions on the matter.

The amnesty releasing those prisoners – more than a hundred in total – was announced five days before a meeting between the French and Cameroonian leaders in Lyon.

A few months after this episode, a Cameroonian activist questioned Macron in February 2020 about the situation in the English-speaking part of the country, where the authorities are fighting a separatist insurgency that accuses the government of carrying out a genocide. Macron responded by saying he would put “maximum pressure” on Biya to stop any human rights violations.

The Cameroonian government was unimpressed by Macron’s statement, emphasising its national sovereignty. At the same time, hundreds of people demonstrated in front of the French embassy in Yaoundé demanding an “apology”.

“While they both reflect the authoritarian governance of Cameroon, political prisoners and the separatist conflict are two very distinct issues,” said Thierry Vircoulon, a researcher in the Africa programme at the French Institute of International Relations in Paris.

“Kamto isn’t the first political prisoner France has managed to get released,” Vircoulon noted. Macron’s predecessor François Hollande “managed to get Michel Thierry Atangana, an engineer who had spent 17 years in prison, out of jail”, he emphasised.

“But when it comes to separatists, that’s a completely different matter,” Vircoulon continued. “Macron’s not getting anywhere on this issue. When you get to Biya’s age, you don’t change. He’s gone through the process of centralising power and he has no interest in devolving some of it to the Anglophones.”

For its part, the Élysée Palace says Macron will in “no way” be trying to promote a particular model of governance.

According to the French government, the main objective of Macron’s visit is to develop agricultural ties with Cameroon – Central Africa’s biggest economy – at a time when the war in Ukraine has generated a food crisis threatening to engulf the whole continent.

Investment by French companies will also be on the agenda, as Africa has become a major venue of economic and geostrategic competitor amongst the great powers. Cameroon has been deepening its ties to China and recently signed a military agreement with Russia.

“France wants to ensure Cameroon’s loyalty amid a relative decline in its influence in Africa, as demonstrated by the state of its relations with Mali, Central African Republic and to some extent Guinea and Burkina Faso,” said Nicanor Tatchim, a professor of political communication at Paris-Est Créteil University. Paris’s partnership with Yaoundé is “essential” because of Cameroon’s role as a source of goods for the surrounding region – most significantly Chad, where France has a military base.

But there is no doubt that this trip marks a change in tone from France towards Cameroon, said Larissa Kojoué, a political scientist at the University of Buea in southwestern Cameroon. “In the beginning, he adopted a rather critical stance towards the Cameroonian authorities – but you get the impression that he’s softened his position since then […] and is putting France’s economic interests before the rule of law.”

Koujoué argued that – intentionally or not – Macron is sending out something of a pro-Biya signal with his visit.

“Biya’s greatest political victory is to have made people believe that nobody would come after him, thereby staying in power all these years,” she said. “He has methodically dismissed everyone who had the potential to make a fresh start, including people close to him. Right now, it’s Franck Biya, his son, who is discussed as the potential successor. So whether he set out to do it or not, Macron is reinforcing Biya’s hegemony by going to speak to him on an official visit to Cameroon.”

“A lot of people in Cameroon – and amongst the Cameroonian diaspora – are worried about the timing of this visit,” Tatchim said. “Cameroon is going to have a presidential election in 2025. The current regime is nearing its end and some see in Macron’s arrival a desire to prepare for the post-Biya era.”

Opposition MP Jean-Michel Nintcheu issued a statement declaring that the Cameroonian people will “not accept” the “imposition” of any new leader who has not been “freely and democratically elected”.

“France doesn’t organise transitions of power either in Cameroon or any other country,” underlined Franck Paris, Macron’s Africa advisor. “Rather, our role is to maintain close ties with our interlocutors.”

Kamto requested a meeting with Macron during the French president’s visit but the Élysée Palace said meetings with opposition leaders are “not customary” during such trips.

Macron’s advisor Franck Paris nevertheless said communication between the French government and the Cameroonian opposition is possible after the trip.

After meeting Biya, Macron will meet with representatives from the Cameroonian youth amongst other members of civil society.

This article was adapted from the original in French.