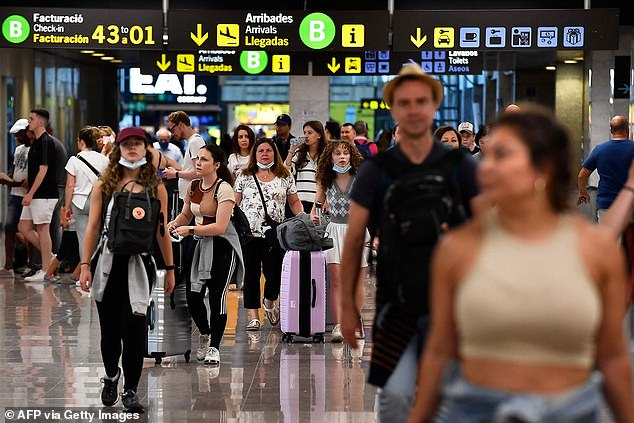 British tourists have reacted furiously after discovering they may be required to prove they are able to spend £85-per-day in order to enter Spain – after the United Kingdom left the European Union.

Proof of having enough cash is not the only new requirement either, with Spain saying British entrants may have to produce a range of documents when entering the country under new rules introduced because of Brexit.

In addition to requesting proof tourists can spend at least €100 per-day – and have a minimum of €900 (£766.94) available – Spanish border agents could also ask tourists to prove they have an onward ticket and accommodation booked for their stay.

British tourists have reacted furiously after discovering they may be required to prove they are able to spend £85-per-day in order to enter Spain – after the United Kingdom left the European Union. Pictured: Tourists arrive in Barcelona, Spain in July

Spanish guidelines say the funds could be in the form of foreign currency, traveller’s cheques, cash, payment letters or on credit cards. If tourists are unable to prove they can support themselves financially, they could be denied entry.

The rule, which has taken some Brits by surprise, has been in force since the beginning of the year. Being outside the European Union on account of Brexit, the UK now falls under the ‘third country’ category, meaning more checks are done.

Several people took to social media to react to the rules, slamming Spain for introducing financial restrictions on those wanting to holiday there.

One person on Facebook wrote: ‘Looks like Spain is making it too difficult and too elitist for many families. Bit of a kick in the teeth to all those who have been going for years. Families and pensioners will be most affected.’

Another person wrote: ‘Let’s see where they are going to get their tourism from now if people chose other countries.. good luck Spain!’

Another wrote: ‘Pretty obvious what the Spanish are trying to do, restrict people coming for a holiday who don’t have a lot of money.

‘If people are on an all inclusive holiday they are not spending money in the local area, so not helping the local economy.’

One Twitter user quipped: ‘If I could afford to spend £85 a day I’d be going somewhere better than Spain.’

Others directed their ire towards Brexit. One wrote sarcastically: ‘Brexit truly is the gift that keeps on giving.’ Another asked rhetorically: ‘More Brexit benefits?’

‘I remember when the proponents of Brexit told us that NOTHING would change if we left the EU. What a joke,’ one angry Twitter user said.

Someone else pointed out on Twitter that Brits are now considered ‘third country’ travellers in all 27 EU states since leaving the union.

The new rules appear to have come as a surprise to many frequent flyers due to the fact that not all British entrants to Spain are checked. While all people entering Spain must meet the requirements, border guards are not required to check all arrivals.

The UK Foreign Office outlined the rules it a statement.

‘At Spanish border control, you may need to show a return or onward ticket; show you have enough money for your stay; show proof of accommodation for your stay, for example, a hotel booking confirmation, proof of address if visiting your own property (eg second home), or an invitation from your host or proof of their address if staying with a third party, friends or family,’ its guidance states.

‘The Spanish government has clarified that the ‘carta de invitation’ is one of the options available to prove that you have accommodation if staying with friends or family,’ it adds. 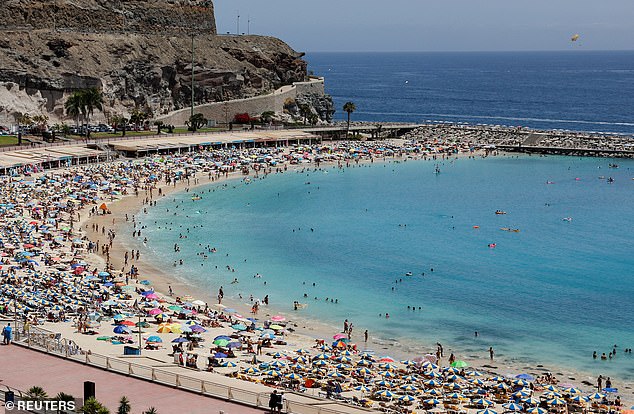 In addition to requesting proof tourists can spend at least €100 per-day – and have a minimum of €900 (£766.94) – Spanish border agents could ask tourists to prove they have an onward ticket and accommodation booked for their stay. Pictured: Overview of the Amadores beach during a hot summer day on the island of Gran Canaria, Spain, July 17, 2022

The Spanish Ministry del Interior said: ‘Foreigners from third countries must prove if required to do so by the officials in charge of controlling the entry of people into Spanish territory, that they have economic resources for entering the country, through cash, traveller’s cheques, payment letters, or credit cards, which must also be proven to have sufficient funds available on them.’

The rules are outlined on the Spanish ministry’s website.

‘Currently, the minimum amount to be credited is 100 euros per person per day, with a minimum of 900 euros or its legal equivalent in foreign currency (with effect from January 1, 2022),’ the website says.

The reasoning behind this, it says, is that arrivals must ‘reach an amount that represents in euros 10% of the minimum gross interprofessional salary or its legal equivalent in foreign currency multiplied by the number of days they intend to stay in Spain and by the number of people traveling at your expense.’

It adds: ‘In the event that, when carrying out the entry control of people in Spanish territory, it is verified that a foreigner lacks sufficient economic resources for the time he wishes to remain in Spain and to continue his trip to the country of destination or to return to the country of origin, or does not have the nominative, non-transferable and closed ticket or tickets, in the means of transport that they intend to use, their entry into Spanish territory will be denied as established by law.’

Since leaving the European Union, British are also required to have their passports stamped at border gates when they are entering and leaving. 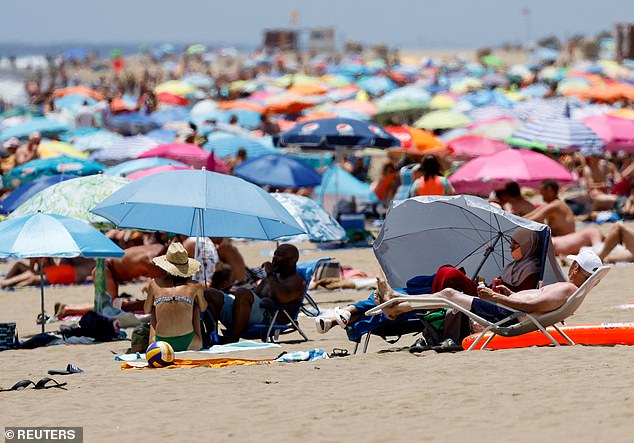 The rule, which has taken some Brits by surprise, has been in force since the beginning of the year. Being outside the European Union on account of Brexit, the UK now falls under the ‘third country’ category, meaning more checks are done. Pictured: Tourists in Gran Canaria

The same €100 per-day requirement also applies to people applying for Schengen visas from Spain. The daily required means on subsistence for Schengen visa applicants differs between each EU and Schengen country.

In Belgium, for example, Schengen visa applicants must prove they have €95 pet day if they are staying in a hotel, and at least €45 if staying at cheaper accommodation.

In France, the minimum daily amount is €120 if the arriving tourist has no proof of pre-paid accommodation. If the accommodation has been prepaid, that amount drops to €65 per day.