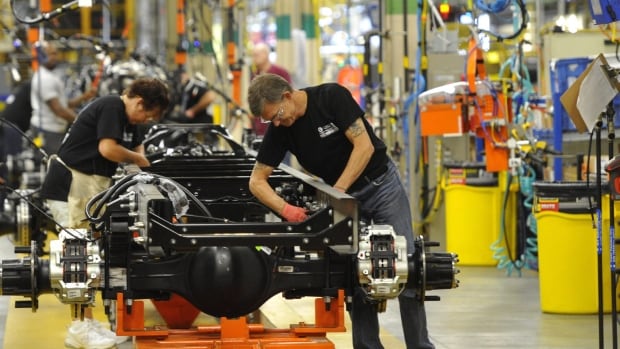 Ray Curry, president of the 372,000-member UAW, says union representation at the battery plants is critical, given that the major automakers are staking their futures on the widespread adoption of electric vehicles.

“It’s going to be key to lock down that type of new technology,” Curry said in an interview with The Associated Press Sunday, the eve of the union’s convention in Detroit this week. “Everybody is dependent upon what happens out of that bargaining.”

General Motors, Ford and Stellantis have announced plans to build seven U.S. factories in joint ventures with battery makers — the former company set to build one in Canada in Windsor, Ont. The plants are expected to employ thousands and to supply power for electric vehicles that the automakers say will account for as much as half their U.S. sales by 2030. EVs now constitute only about 5 per cent of the market.

During the years-long transition from combustion engines to electricity, Curry said, thousands of workers who now manufacture engines and transmissions will need jobs. He argued that these workers should receive top assembly-line wages, now around $32 US an hour, without any jobs lost to the technology change.

Any decision on union representation will be part of contract talks with the three automakers that will start next summer.

Sam Abuelsamid, a research analyst at Guidehouse Insights, agreed that as gasoline-powered vehicle sales decline and battery plants become one of the industry’s few employment growth areas, the UAW will need to organize these factories if it is to retain jobs. Fewer workers, he noted, will be required to build electric vehicles, which are much simpler to produce than combustion-engine vehicles.

“They’re going to lose a lot of members, especially from powertrain plants and some other component plants, and also probably from assembly plants,” Abuelsamid said of the union.

Complicating matters is that because the plants are joint ventures between the automakers and battery manufacturers, the two companies may differ on the issue of union representation. GM, which will open the first of the battery plants this summer in Lordstown, Ohio, has said it will support the UAW’s representation.

The issue of EV jobs is so important to the future of the UAW that some industry analysts predict strikes against automakers once contracts expire in September 2023. And because the automakers want costs to be competitive with nonunion battery plants, strikes, if they occur, could run long.

Any decision to strike would be up to the UAW’s members, Curry said. The union, he said, could reach a deal with one automaker “and then the others all line up.”

Curry argued that labor costs make up only a small portion of total battery expenses and that paying union wages would still leave the new factories competitive with non-union battery plants.

With inflation at a 40-year high, the union will seek to restore cost-of-living pay raises, which were suspended after the 2008-2009 Great Recession battered the auto industry.

“You cannot, during a four-year agreement, not have increased wages and sustain your purchasing power,” Curry said.

When UAW workers at John Deere won cost-of-living raises last year after a monthlong strike, Curry said, it raised interest among workers in the auto and other industries.

The union also is trying to organize workers at factories in the south run by automakers based in other countries. And Curry said it’s looking at electric vehicle startups and is still trying to organize Tesla’s factory in Fremont, California.

The UAW, he said, has recruiters at many of the locations, including at Nissan and Volkswagen factories whose workers narrowly rejected union representation during the past few years. Curry declined to say where the first vote might take place.

At this week’s convention, delegates will nominate candidates for all the union’s top offices, to be elected this fall. In the past, delegates to the four-year convention chose the officers. But last year, members voted for direct elections in the wake of a bribery and embezzlement scandal that sent two former UAW presidents and other union officials to prison.

Curry, appointed last year to replace a retiring president, says he will be running, and he will face opposition.

To avoid a federal takeover after the scandal, the union agreed to financial reforms and to a court-appointed monitor to oversee its operations. Last week, the monitor, Neil Barofsky, accused UAW leaders of concealing misconduct by an official and of failing to put proper financial controls in place. The union’s conduct interfered with the monitor’s ability to do his work, Barofsky wrote.

His assertions raised questions about whether the union has reformed itself as it has announced. Barofsky wrote that he sent two cases to the U.S. Attorney in Detroit for investigation.

Curry conceded that Barofsky should have been notified about the misconduct earlier and said the union has hired a new top lawyer. Also, he noted, its outside law firm is no longer dealing with the monitor. He said the union has tried to reset its relationship with Barofsky and blamed, in part, miscommunication.

“What we’ve asked him now,” Curry said, “is if there’s something that’s not right, that doesn’t line up, and you’ve got a question about it, please advise us because we would not want to hear it six months later as part of a report.”

Barofsky also asserted that the union lacks controls in place requiring budgets for internal conferences. Nor does it have limits on spending for drinks, dinners and other line items.

Curry said those safeguards are coming, contending that it takes time to adopt all the reforms while the union manages contract talks, organizing and other issues.

“All of these things can’t happen overnight,” he said. “But I can assure you, we’re working to make sure that they happen.”